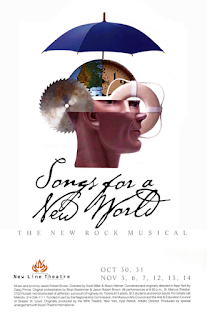 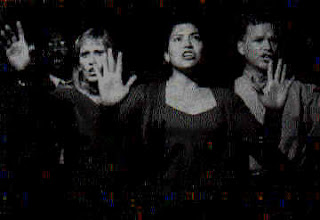 “Songs for a New World is that very rare beast: an abstract musical. . . Here is a musical that doesn’t try to bombard or cajole you – it simply speaks honestly through fine music and proves that less can most certainly be more. . . Individually, the performers are fine, together they are fabulous, and the harmonies and group singing are uncommonly rich and vibrant. . . The mystical union of song and performance was simply profound at the St. Marcus. . . a true theatrical gem.” – Mike Isaacson, The Riverfront Times

“I'm at a loss as to just what to call this production, except fascinating, engrossing, and totally absorbing. It’s the kind of performance that just cries out to be seen more than once, just to get all the nuances of the lyrics of the songs. Maybe one could call this a musical call to personal reflection, almost a contemporary worship service without dogmatics, but even that might be too limiting a description for such a freewheeling exploration into the human soul.. . The voices of the cast members are all outstanding, and the emotion they put into each piece lifts the presentation from just a bunch of songs into something between poetry and worship. Most of the time the message is a powerful message of hope and faith in a God who knows the future, but sometimes it becomes a picture of the despair that comes when one loses that hope and faith. It is, as you can tell, a complex and fascinating evening you'll be thinking about for a long time to come. Come see the presentation with a friend whose opinion you value, then plan to spend many invigorating hours talking about what you heard on stage.” -- Russ Thomas, KDHX-FM

“Just as personally inspiring for me was watching five local actors pour their hearts and talents into Songs for a New World, another New Line production, featuring the fine songs of Jason Robert Brown. . . making for a truly cherished memory.” – Mike Isaacson, “1998: The Year in Theatre,” The Riverfront Times

DIRECTOR'S NOTES
I didn't love the original cast album of Songs for a New World when I first bought it a couple years ago. I didn't get it. But the more I listened, the more I realized there was so much there worth getting.

Like Jacques Brel is Alive and Well and Living in Paris (which New Line produced in 1997), this is a show that is kind-of a revue, kind-of a song cycle, kind-of a concept musical. It almost dares you to figure it all out. But that's what was so exciting about Jacques Brel, the challenge to direct the show intelligently and clearly enough, and to perform the songs well enough that the audience would be able to understand everything. And it helps that what may be confusing on the CD can be much clearer when the audience can see the performers, see their faces, their body language, costumes, etc.

And yet, even with the help of visual clues, these are not songs that lay out at the beginning everything you need to know. You have to listen. You have to accept that these characters may be distorting the truth, intentionally or not. But when you do listen closely, the rewards are great in this show. When you realize that the woman in “I'm Not Afraid of Anything” has just walked out on her husband, her claims of courage and adventure take on a much darker tint. When you realize that the young woman in “Christmas Lullaby” has just found out she's pregnant (and no doubt completely alone), her sweet lullaby becomes more a bittersweet anthem of determination and a newfound realization of self-worth. When you realize the soldier in “Flying Home” has died in battle, this powerful hymn becomes both sad and joyful.

And what ties all these independent songs into a unified evening of theatre is their one common theme. In every song, someone faces that moment in life when everything is going perfectly and suddenly disaster strikes, in the form of the loss of a job, an unexpected pregnancy, the death of a loved one, the end of a marriage, imprisonment, even suicide. As the opening says:


It's about one moment,
That moment you think you know where you stand.
. . .
But then the earthquake hits,
Then the bank closes in,
Then you realize you didn't know anything.
Nobody told you the best way to steer
When the wind starts to blow.

But it’s even more about surviving those moments. In each song, a character truly finds himself in a “new world,” a world in which the old rules no longer apply, in which everything he thought he knew about life has to be figured out all over again. We've all been there. But we survive.

The finale says, “Hear my song. It was made for the times when you don't know where to go.” And that's what this show is about, to remind us that we all go through these times, and almost always, we come out on the other end still in one piece. We are survivors. And we are never really alone.

REMEMBERING SONGS FOR A NEW WORLD

Performing in Songs For A New World was probably the most terrifying and exciting theatrical experience I've had. At one point in rehearsals my mantra was, “Fear is a motivating factor.” I knew also that I wasn't the only one terrified by the challenges presented in this amazing musical revue by Jason Robert Brown. Scott had his work cut out for him in finding an African-American tenor who could sing to the stars. He did find that in the amazing John Rhine, who floored all of us with his bluesy, sweet gospel sound. For my part in the show I needed to create a German accent, a New York Jewish accent – a distinct character for each song, not to mention having to sing alto for the first time. I'd been spoiled always singing lead. I was up for the challenge. My favorite song to perform was “Surabaya Santa,” a takeoff of the song “Surabaya Johnny.” Perched atop a cabaret chair, in a housecoat and slippers, I was this crazed, alcoholic, sex-starved German-born wife of Santa Claus who suffered badly from North Pole cabin fever and threatened Santa with running off with his elves. My inspiration for the song came from a local stage mother who drinks a wee bit and whose lipstick often runs beyond the lines of her lips. Each night I reveled in performing this song, but I knew that the next time we did the show I would have to wrestle Chris Brenner (my wonderful co-performer) for the song, as he was a perfect candidate for it.
– Deborah Sharn, cast member

One of the hardest mother-f---ing shows I have ever done in my life, but I loved every minute. Normally when you leave the stage after a song, you can rest and regroup and relax a little bit. Not in this show. The music was so difficult that we could not let up for one minute. But I think all the effort was worth it. The saddest part of the show was the lack of audience. I don't think that mattered to the cast – we loved the show, we loved doing the music, and we enjoyed working with each other. I think it was wonderful that the cast got to sing some of that great music at the concert at the Sheldon. An audience finally heard our song.
– Chris Brenner, cast member

I was really sick during Songs for a New World. I had been getting migraines for years, but by November of 1998, I had had one continuous migraine for five months. I didn’t have health insurance, so I hadn’t been to a doctor. The show was one of the hardest I had ever worked on; I had foolishly decided to play the monstrous score for the performances myself, and I was feeling awful. Three nights before opening night, I missed a rehearsal for the second time in my life. I just couldn’t get out of bed. Somehow, I managed to pull myself together and I played every performance, sometimes wondering if I was going to pass out during the next song. Most nights, I went home and straight to bed after the show. The week after we closed, I finally gave in, after not being able to eat for two days. I called my co-director and friend, Alison, at 5:00 a.m. on the Sunday after Thanksgiving and asked her to take me to the emergency room, where they discovered I had blood pressure of 230 over 140. They thought I was going to have a stroke any minute, or that I had just had one. They admitted me and three days later I was fine. I realize now how true that old line is: The show must go on. My body didn’t give out on me until after the show had closed. It knew.
– Scott Miller, director

My first experience with New Line Theatre was seeing Assassins. Because of the quality of performances, I knew I had to work for this theatre company, which led to me to audition for Songs for a New World. I sang an excerpt of “Christmas Lullaby” during the audition, and it was beautiful. I wanted to sing the entire piece and learn its meaning. Deborah Sharn was there to audition as well, and all I could think about was how fantastic it would be to do a show with someone of such high caliber. A week later when Scott Miller called (I had already given up hope) to ask me to do the show, I was ecstatic. I am going to work with Deborah Sharn (who I referred to as the Great Deborah Sharn), this amazing theatre company who put on Assassins, and I get to sing the beautiful song! Does it get any better? It does. The weeks ahead would unfold incredible melodies and harmonies, beautiful songs and stories about people, a level of performance, strength, and inner being I never knew I had, and best of all, a very special friendship to last a lifetime, a unique relationship all our own. Deborah, Chris, John, Scott, Alison, Amy are all in my soul and spirit forever, and we know without words how we are a part of each other every time we meet. From the opening sequence to “Hear My Song” at the end, we took an amazing journey together, each moment as incredible as the next. I wonder what new meanings these stories will take on for me several years from now. Maybe we'll have the privilege to take the journey once again.
– Kimi Short, cast member