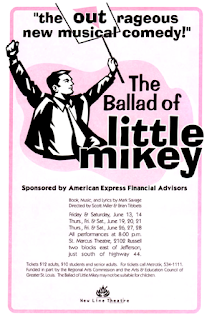 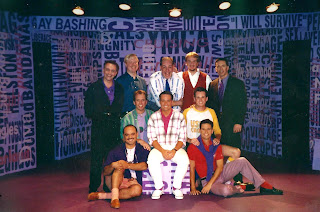 THE REVIEWS
“When you think you’ve seen it all, along comes something like The Ballad of Little Mikey, the only musical comedy ever to include a number about anonymous sex in a public bathroom. . . That willingness to poke fun is the sharpest thing about the play.” – Judith Newmark, St. Louis Post-Dispatch

“Though your jaw may drop, you’ll be hard pressed not to smile, for this number [“Tap”], and in fact most of Little Mikey, is offered with such a winning spirit that you can’t resist. . . Particularly in the first act, the show is smartly self-mocking, exploring the gay ethos with predictable romantic fawning and some sure, swift kicks.” – Mike Isaacson, The Riverfront Times

“Scott Miller and his New Line Theatre continue to bring St. Louis challenging, refreshing musical theatre that you simply can’t see anywhere else. . . The Ballad of Little Mikey will make you think and it will teach you a thing or two.” – Steve Callahan, KDHX-FM

DIRECTOR’S NOTES
Much of the action of The Ballad of Little Mikey takes place in 1981, the year Ronald Reagan was elected president. The gay movement had been gaining considerable ground since the historic Stonewall riot of 1969. In 1979 alone, the year leading up to the action of this show, a gay high school senior sued his school for the right to take another boy to prom. The first national gay march on Washington was attended by 100,000 protesters. California Governor Jerry Brown signed an executive order prohibiting anti-gay discrimination in state hiring. Los Angeles became the 44th city to enact gay civil rights legislation. And the Moral Majority was formed by Jerry Falwell to oppose gay rights, pornography, feminism, and communism.

At that time, gay literature was not what it is today. Most gay stories were about how hard it is to be gay, about facing rejection and discrimination, about trying to find love in a world that demonizes homosexuality. Gay characters were not at all like straight characters.

And gay literature and theatre have turned a corner. Instead of stories about Being Gay and the pain of being an outcast (as in The Boys in the Band, La Cage aux Folles, etc.), stories are now being written about gay characters finding love, building relationships, dealing with family, work, and friendships. Though the main characters are gay, the stories are about facing the same problems and joys straight people face.

The Ballad of Little Mikey embodies both these traditions: the scenes set in 1981 are centered on the issue of being gay and what that means in a hostile world, while the scenes set in the present are about relationships, love, compromise, and sacrifice. In fact, a straight couple could play the scenes in the present without changing a word. Mikey not only covers two distinct political and cultural periods, but also two eras in gay literature and theatre. It's interesting to realize that the fantasies the friends express in the song “Ten Percent” are actually coming true – there are gays in the House and the Senate, and people really do take their gay spouses to company picnics now.


Being gay is no longer something to be ashamed of. As a society, we've grown up with Mikey and learned as he did that it's not about who you love; it's about how you love.

REMEMBERING MIKEY
I found the cast album of Mikey at Webster Records and fell in love with its honesty, its humor, and its heart. Without too much effort, I got in touch with Mark Savage, who wrote the show, and we had soon made a deal for New Line to produce Mikey. The only thing that worried me about staging the show was the song “Tap,” an extended, comic musical scene about Mikey discovering the mysteries of gay men having anonymous sex in public bathrooms in the 1970s. How was I going to deal with this number, in which a bunch of gay men do a soft shoe number with their pants around their ankles? But I did what I always do when I’m stumped. I took a step back from it, and my co-director Brian and I asked that all important question, “What is this song about at its core?” I realized this song was about Mikey discovering anonymous sex and finding it altogether unpleasant and unsatisfying. This was an experience he had to go through on his journey to becoming a healthy, well-adjusted, monogamous gay man. I realized the audience had to be led to the same conclusion as Mikey. It had to be slightly disturbing, even though it was a comedy number. I also knew from past experience that if a director is afraid of offending and shies away from presenting a moment on stage honestly, the audience will smell that fear and will inevitably be offended anyway (audiences are kinda like dogs, that way). But if you present that moment honestly, the reaction is generally much better. So we really went for it in “Tap.” We simulated every sexual position a person could navigate in a public bathroom. We created a Busby Berkeley-inspired rainbow colored ring of toilet seats. We created an in-your-face, no-holds-barred, admittedly sexual, comedy number, and it worked. Audiences loved it, and few people were offended. Only one person walked out during the entire run. But Mark Savage himself had the funniest reaction. When I asked him what he thought of that number, he told me it was so extreme, so sexual. I laughed and said, “Mark, you’re the one who wrote a song about anonymous bathroom sex!”
-- Scott Miller, director
0 comments