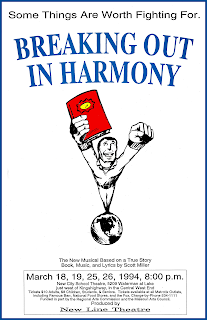 THE REVIEWS
“There are a lot of truths – and a lot of questions – in Breaking Out in Harmony. . . Miller has dealt with a subject that continues to make news and cause controversy. . . There are many problems in the New Line Theatre production, but the drama has sufficient backbone to stand upright and deliver its message. . . Despite the shortcomings, Miller has written a musical that is ‘about something,’ and about something important too. It’s worth seeing, thinking about, and most important, acting on.” – Joe Pollack, St. Louis Post-Dispatch
“Some of Breaking Out’s songs are rousers.” – Harry Weber, The Riverfront Times

DIRECTOR’S NOTES
In this new musical, three members of the school board of the fictional Harmony, Missouri school district break into their high school library after hours and remove eleven “objectionable” books. Their teenage children find out and launch a protest (one of the kids even figures out how to turn the issue into a profit-making venture), and the controversy divides the community. Despite the students' protests, the board votes officially to keep the books off the shelves, so the students go to the local ACLU for help. The actual case on which the show is based, Pico v. Island Trees, went on for seven years and ended up in the U.S. Supreme Court.

But this is not an isolated case. In fact, since Ronald Reagan took office in 1980, censorship cases have been increasing dramatically every year. Parents continue to demand the removal of everything from Dr. Seuss and Stephen King to the Bible. An organization in Washington, D.C. called People for the American Way tracks the hundreds of challenges to materials in schools each year. Nearly half of the challenges are successful.

But our show isn't only about censorship. The other big issue in Breaking Out in Harmony is the question of when a child is old enough to make his own way in the world. The students believe that by age 17 they can make mature decisions for themselves. Yet with the continuing increase of guns and drugs among American teenagers, their parents believe they have good cause to worry about their children and about the many influences on their children's attitudes. Who can honestly say they have nothing to worry about?

Breaking Out in Harmony doesn't try to answer these questions. It merely explores the fears and motivations behind the people on both sides of these very complex issues. In an increasingly dangerous world, parents find it more and more difficult to stop protecting their children. And in the midst of an information explosion, teenagers see so many things they want to explore and discover, and they don't want their parents holding them back. Unfortunately, a case like this one puts the concerns of parents and their children into direct conflict.

The New York Times said about the original case, “The controversy . . . points directly to fundamental questions about the nature of community in modern American society.” One of the judges ruling on the case wrote, “The use of governmental power to condemn a book touches the central nervous system of the first amendment.” And the debate rages on today, over everything from Madonna's book, Sex, to the author of the Winnie-the-Pooh books.

Thank you for joining us tonight for this roller-coaster ride through the American education system, the American family, and the U.S. Constitution. We hope you enjoy yourselves, and we hope you find lots of things to talk about on the drive home.


REMEMBERING BREAKING OUT IN HARMONY
I’ll never forget one performance during Breaking Out in Harmony. One of the leading women was very difficult to work with, and one night, an hour before a performance, she showed up with her parents and demanded free tickets for them. Now, we didn't give actors free tickets for family members. But this actress told me that either I give her free tickets or she’d quit the show right then. (Being a small company, we did not have understudies.) I didn’t see how I could give her tickets without giving all the other actors tickets, which would kill our ticket sales. So I stood my ground and refused. She stormed out of the theatre screaming at me that she quit. The cast went crazy. Would she come back? Was she really quitting? I calmly assured everyone that she would be back, secretly terrified that she would not. Finally, she returned to the dressing room about four minutes before curtain and put on her make-up and costume quickly without saying a word to anyone. She did the show and finished the run, though she never said another word to me. Since that incident, I’ve become very attuned to “attitude,” and if an actor shows even the hint of attitude in auditions, I won’t even consider them. I don’t ever need to go through that again.

Breaking Out in Harmony taught me a really big, important lesson about writing – that conclusions belong in the audience. Good theatre never tells an audience what to think. It presents a story, issues, questions, and then asks the audience to think about it and come up with their own answers and draw their own conclusions. But in Harmony I told the audience exactly what I thought they were supposed to think in the finale, and though the finale was a pretty good song, it sort of emasculated the show. I was starting to feel good about myself as a writer and, without realizing it, I got pretentious and self-righteous. It hurt the show. But I learned my lesson. I hope.