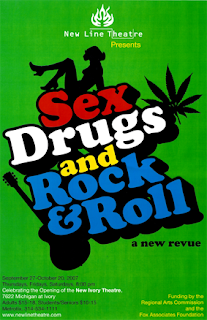 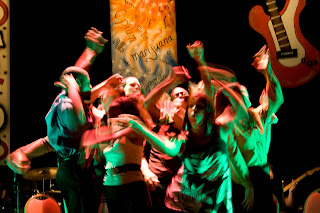 “New Line Theatre, whose fans followed the company around town for years, opens its 17th season in a new venue with a revue that stirred up controversy before the show even opened. The dustup, which centered on a clause in the contract to sell a church and turn it into a theater, died quickly. As it turns out, Sex, Drugs and Rock & Roll makes a strong season opener. . . There’s no plot. Still, Scott Miller, who conceived and directed the show, plays songs from different eras off each other, adding unexpected context and resonance. . . Overall, Sex, Drugs and Rock & Roll makes for an entertaining evening that shows off New Line’s sensibility, performers and new home.” – Judith Newmark, St. Louis Post-Dispatch

“The four final numbers in the first act, from Avenue Q, Naked Boys Singing, Tomfoolery and I Love My Wife, were a perfect blend and an ideal example of using satire to make a political – or sexual – statement. . . Good voices and ensemble work from all the performers; Matthew Korinko and Isabel Pastrana, plus pianist Chris Petersen, left fine impressions. Sex, Drugs and Rock & Roll, fast-moving, tuneful entertainment at the Ivory Theatre.” – Joe Pollack, KWMU-FM

“Miller keeps the two-act, two-hour show moving at a brisk and enjoyable pace for the most part, and he’s assembled a strong cast that is comfortable and engaging delivering tunes from myriad works. . . Miller’s energetic troupe delivered the goods with fun and flair.” – Mark Bretz, Ladue News
“After a little controversy about whether it was suitable fare for a theater built in a former church, the verdict is in. Sex, Drugs and Rock & Roll is not obscene! (What a relief.) The good thing is that The New Line Theatre and its fearless Artistic Director, Scott Miller, received thousands of dollars worth of free publicity during the mini-squabble, and hopefully it will sell more tickets to this worthy musical review about three aspects of life in which most adults participate in at least 2 out of 3.” – Harry Hamm, KMOX-FM 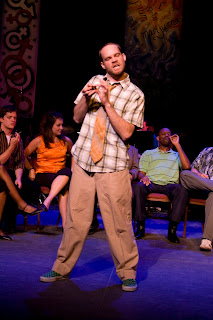 Humans tell stories to try to understand themselves and the world around them. And what topic is more confusing, more mysterious, more in need of understanding than sexuality? From The Trojan Women to Romeo and Juliet to Dracula to Rent, many of our most lasting stories have tried to explain sex. Americans today seem to be more afraid of sex than ever, because sex keeps changing. When it is no longer exclusively about procreation, when sex has also become recreation, entertainment, commerce, art, how do we make sense of it?

And then there are drugs. From Sleeping Beauty to A Midsummer Night’s Dream to The Wizard of Oz to Hair to Requiem for a Dream, we have always been fascinated by altered consciousness. But it scares the Powerful because it can’t be controlled – just like rock and roll, only fifty years old yet already the most powerful cultural force in the history of humankind.

How do we grapple with all this? We tell stories.

But we live in a time when people with power want very much to “clean up” and dumb down American culture, to make everything safe for kids and palatable for adults who are afraid of their own complexity. For centuries there has been adult culture and child culture, each designed to deliver what its audience needs. Children learn about sharing, cooperation, and courage from their stories. Adults learn about complexity, the darker human urges, the destructive power of sex and love, the corrosion that comes with power. Unfortunately, these new American Crusaders would rather adults don’t learn about these things and instead live in happy, passive ignorance.

But some of us want to understand more. Some of us want to learn as much truth as we can in the time we’ve got. And some of those truths come in the “dangerous” form of films like Pink Flamingos and Blue Velvet, novels like The Story of O and The Subterraneans, and musicals like Hedwig and the Angry Inch, The Rocky Horror Show, and Hair.

Sex, Drugs, and Rock & Roll isn’t the kind of show most of us are used to. The continuity of the show comes not from plot, but from exploration and emotion. If it has models, they are probably Songs for a New World, Jacques Brel is Alive and Well and Living in Paris, and a show I saw at the Rep years ago, Songplay. In certain ways, this is an abstract show, not dealing in concrete reality but exploring very real truths about ourselves and each other. This is not a musical but it’s more than just a concert.

These songs have been removed from their original context to reveal truth even more universal than we imagined. Here, “Gethsemane” from Jesus Christ Superstar is sung by an ordinary man whose struggles seem to him just as insurmountable, just as overwhelming as those of Jesus. Instead of seeing the human in the divine as we did in Superstar, here we see the divine in the human.

And after all, isn’t that the point of telling stories?


Editor's Note: If you want to read all about the horrifying nightmare the New Liners endured, moving into a new theatre with this show, here are the gory details...
0 comments