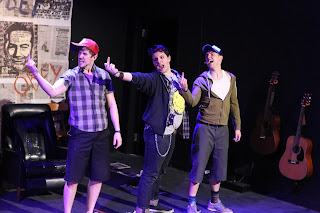 "Where does Scott Miller find so many appealing young performers for his New Line Theatre shows? American Idiot is no exception. The large cast – a mix of New Line veterans and newcomers – delivers passionate performances, sings with authority and moves (you can’t exactly call it dancing) with hormone-fueled abandon. It’s just the cast that Miller – the company’s artistic director, and co-director of this show with Mike Dowdy – needs for this angry and melancholy musical. . . But the show is at its strongest when the whole ensemble is onstage, a living force-field of alienation." – Judith Newmark, St. Louis Post-Dispatch

"It’s the perfect musical for New Line, and for directors Scott Miller and Mike Dowdy: gritty and real, and entirely propelled by great music and magnificent singing under the baton of Sue Goldford. So many moments of outstanding vocal artistry come roaring out at us in the dark, sculpting (through punk rock!) and defining barely formed youth, that the characters become real in a way that reaffirms the highly poised ‘realities’ of opera itself. . . somehow, both the popular and the classical merge seamlessly, getting their full due in this very intricately sung yet captivatingly natural and highly compelling production." – Richard Green, TalkinBroadway

"Entertaining and effective, American Idiot is a sensory onslaught that flashes with brilliance. . . A captivating reinterpretation of the American Dream. . . New Line Theatre mines these themes in a deeply satisfying production that features an abundance of young talent. . . The cast are uniformly strong singers and the interpretations of the songs are spot on. . . The themes resonate with contemporary audiences, and the talented cast invites them along for a nihilistic-tinged roller-coaster ride that entertains at every turn, making American Idiot a show not to be missed." – Tina Farmer, KDHX

"The disconnect I felt with the touring production vanished in the cozy confines of The Marcelle. . . This is a real hit, that genuinely rocks the house! . . . Scott Miller and Mike Dowdy dynamically reshape this show in a way that brings it right up in the audience’s face. There’s no disconnect here; you’re always plugged in. It’s an complete assault on the senses. . . Go see New Line Theatre’s production of American Idiot while you can!" – Chris Gibson, BroadwayWorld

"American Idiot is a show about youth and raging against a world you live in but aren’t old enough to shape. . . The New Line Band rocks the shit out of the music, particularly guitarists D. Mike Bauer and Aaron Doerr. Directors Scott Miller and Mike Dowdy went with a narrow stage and a deep riser for the audience, more in line with a rock show than a play. The result is a close, sweaty show that feels alive at all times." – Paul Friswold, Riverfront Times

"Some insanely entertaining and thought-provoking musical theater is happening at New Line Theatre. . . Shows like this don’t often make it to venues in St. Louis, so take advantage of the opportunity to see this adrenaline fueled show before it’s gone..." – Donald Miller, Alton Telegraph

"With conductor Sue Goldford and her band delivering a raucous and resonating interpretation of Green Day’s music, meshed with boisterous performances by the cast under the careful direction of Scott Miller and Mike Dowdy, this American Idiot makes sense of the disaffection of youth in the post 9/11 United States. . . New Line’s presentation superbly captures the musical essence of the album and show as well as making the most of the straightforward plot. . . You’ll likely find yourself swaying and tapping along with the many infectious tunes by Green Day that are well adapted to the stage." – Mark Bretz, Ladue News

"The fury that simmers within generations of young adults is nothing new, but New Line’s current production of Green Day’s American Idiot, adapted from the band’s 2004 concept album of the same name, is painted in sharp-edged, pop-punk strokes that strike a familiar chord, particularly now. With the country in the midst of a divisive political season, Billie Joe Armstrong and Michael Mayer’s rock opera about coming of age in a post 9/11 world of uncertainty, taps into an angry restlessness that’s as palpable today as it’s ever been. . . This fully executed musical is magnetic, whether you’re a Green Day fan or not. With doses of surprising introspection, a dedicated cast and heart-pumping music, you’ll leave the theatre with a memorable high." – Andrea Torrence, St. Louis Theatre Snob 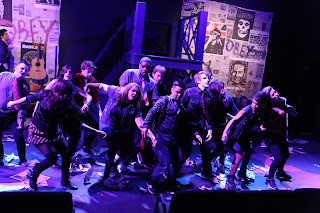 "Generation X has something to say in American Idiot, and goes straight for the jugular to get our attention. New Line Theatre’s art provocateurs shake the rafters in the explosive regional premiere of the 2010 Tony-award winning musical, an in-your-face introspection for anyone disillusioned, submissive or seething in post-9/11 USA." – Lynn Venhaus, Belleville News-Democrat

"Thanks to the New Line corps of young talent, it works beautifully with singers that are actors leading the way and the pulsing sounds of the Green Day score carrying us along. . . Directors Scott Miller and Mike Dowdy bring their usual spirit and flair to the proceedings and keep the show moving at a frenetic pace." – Steve Allen, StageDoorStL

"The musical based off of the Green Day album American Idiot is rocking the Marcelle Theatre in Grand Center here in St Louis. New Line Theatre is known for producing edgy and hard hitting shows. This show is no exception. From the start to finish the show is a train ride that doesn’t slow or show mercy." – Erin Karll, Onstage

"American Idiot was an album first, and then it was a musical. Now, it’s on stage at the Marcelle Theater in Grand Center in a big, loud, angry, and extremely thoughtful production from New Line Theatre. With the first-rate singing that New Line is known for, as well as a stellar cast and striking physical production, American Idiot makes a strong impression. . . It’s a gritty, high powered, emotionally charged rock opera that presents a compelling picture of the lives of three young men on a journey for fulfillment in difficult times. It’s definitely not for kids, but for adults and older teens, this is a show that provides a lot to think about. It presents a striking auditory and visual tableau of life in early 2000’s America, with a soundtrack by a band that helped define the cultural atmosphere of that era." – Michelle Kenyon, Snoop’s Theatre Thoughts blog 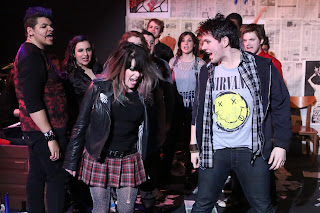 America is a very angry place right now. And boy, do we have some theatre for you that taps into that zeitgeist and tries to understand it...

It’s interesting to work on American Idiot, as Hamilton dominates the world of musical theatre. People talk about how Hamilton will fundamentally change the art form (and I think they’re right and I’m really glad), but it reminds me that Rent was just as paradigm shattering in 1996, just as revolutionary, just as "fusion-ary" and influential. I realize that American Idiot holds up the center of a political rock theatre trilogy. As tuned into its own zeitgeist as Rent was, so is American Idiot, and so is Hamilton.

American Idiot is a triple Hero Myth, as Johnny, Will, and Tunny all respond in different ways to the cultural upheaval of a post-9/11 world, and all three go on spiritual journeys to find their place in the world, their path – their “Real,” as Passing Strange would put it.

Heroes’ journeys can be concrete, as in an actual journey, or they can be interior. Or both. In American Idiot, director and bookwriter Michael Mayer gives us all three versions. Will stays behind, and his journey is interior, about learning to grow up and stop being selfish (just like Rob Gordon in High Fidelity). Both Johnny and Tunny take actual journeys, but Tunny literally goes to the other side of the world, while Johnny physically travels to New York, but then journeys inside through the use of drugs. All three of them travel to “the underworld” in one way or another, as many classic heroes do.

All the big ideas in the show are present in the original Green Day album but more abstract, more thematic, more metaphoric. In the context of our triple Hero Myth, “Wake Me Up When September Ends” is no longer about the death of Billie Joe Armstrong’s father, but instead it transforms September into a symbol, the month that contained 9/11 and all the anniversaries, the post-9/11 mindset in its totality, forever with us. This song of personal loss and pain becomes instead a song about societal loss, and about social oppression and delusion. September becomes the culture of the War on Terror.

What’s different about these three journeys from their archetypes is this additional element not always present in stories like these. Not only do these men have to find their individual paths, but at the same time, a very aggressive, oppressive culture is pushing them onto a different path, into a mindset they know instinctively is false and toxic. The entire conflict of our story is set up in the first sentence of the show, "Don’t wanna be an American idiot!"

In other words, "Your Real is not my Real. Your fear is not my fear. Your path won’t get me to my destination. But how can I find my own Real, how can I avoid being an American idiot, if Bush and Cheney’s Real is the only Real anyone recognizes? How can I find my Real when their Real permeates everything?"

None of the three finds much good in the path he chooses, but ultimately we see the problem isn’t the three paths; the problem is the world has gone mad. And the triumph for any of our three heroes is in not going mad as well, each finding sanity in his own Real and staying on his own road, just as humans have done during times of turmoil and upheaval for centuries.

Just as our Hero Myths have taught us.