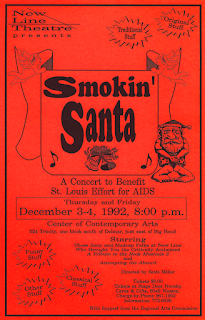 I’m a Jew in a Christmas concert. Sure I’ve heard these songs before, but never the words. Not really. Caroling to me was dancing around the house like Mrs. Brady, and we didn’t do that very often either. So I decided to open my mind and heart and just listen to the spirit of the music. That’s when I heard Holli singing “Have Yourself a Merry Little Christmas” onstage. I was in the back of the house lacing up my Chuck Taylors when the sound hit me. A deep, velveteen alto with all the depth of an ocean. And the sentiment, not just the words, hit me in one vast wave. I started crying like a baby, uncontrollably like when cutting onions, and I heard the song. I really heard it. It’s a beautiful song. And Holli’s a beautiful woman. Wow, what a voice.

Smokin’ Santa was an interesting experiment, our first foray into cabaret style theatre. It was an eclectic… no, let’s be honest, a bizarre mix of traditional carols and pop songs, novelty numbers, parodies, and classical pieces, everything from “You’re a Mean One, Mr. Grinch” to the eleventh movement of Bach’s Magnificat in D Major (performed with a swing beat and sunglasses), to a parody number called “The Song About Hanukkah” written by my friend Dan Guller to the tune of “America” from West Side Story. The show also included one song I wrote called “The Christmas Tree Fell Over and Our House is Burning Down.” But despite the generous amount of silliness, it was also a very personal show for me. In high school, we did a vespers concert every year at Christmas, put together by the greatest choral teacher I’ve ever encountered, Jim Buffalo. Jim retired a couple years after I graduated and the vespers concerts ended. Smokin’ Santa was in part my admittedly odd personal tribute to Jim Buffalo, and I included several pieces from the vespers concerts, including a processional of carols he put together, the comedy song “Fruitcake,” the Bach piece (though with my own twist), a fourteenth-century motet called “In Bethlehem,” and Jim’s own, gorgeous arrangements of “O Holy Night.” I’m not sure it entirely succeeded as a theatre piece, but it meant a lot to me, and it taught me a lot about building revues.