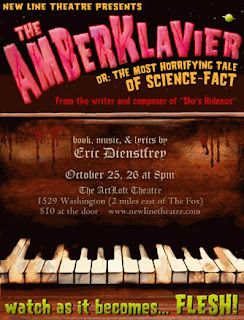 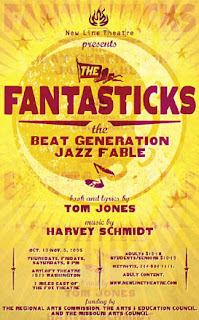 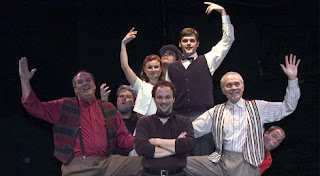 “At New Line Theatre, the audience is used to surprises. . . this time, the surprise lies in the voices - the best that New Line has ever showcased. They make the familiar, unassuming musical sound, of all things, lush. “ – Judith Newmark, St. Louis Post-Dispatch

“This was a night that I was glad to enjoy the simplicity of theater the old-fashioned way. In an age of spectacle, The Fantasticks is fantastic in its smallness. . . New Line’s Fantasticks is not a musical to blow you out of your seat. Rather, it is an experience in the goodness of the human heart, and does in fact speak of timeless themes relevant to our selfish modern world. . . listeners should take some time next weekend to enjoy the simple bliss that is The Fantasticks courtesy of the New Line Theater. “ – Doug Storm, KDHX-FM

“Less is more with The Fantasticks, and that makes it an ideal show for artistic director Scott Miller’s New Line Theatre. The Fantasticks accommodates just two musicians, harpist Sue Taylor and pianist Chris Petersen, whose soft, subtle renditions of the jazzy tunes of lyricist Tom Jones and composer Harvey Schmidt nicely complement the low-key action on stage. Under Miller’s sure and steady direction, his ensemble delivers the wit and charm of this gentle show in a way that reminds us of why The Fantasticks was performed a staggering 17,162 times in a tiny theater in New York for 42 years (!) beginning in 1960.” – Mark Bretz, Ladue News

“New Line’s The Fantasticks is a good illustrator of why it’s sometimes okay to just let a piece be what it is, whether that be simple or grandiose, fluffy or deep, comedy or tragedy. It also shows why the best shows mix these labels up, or, rather, have a little of everything. Sometimes it’s worth just seeing a good play done well. You might get your thoughts provoked, or you might not, but the enjoyment makes it all worthwhile.” – John Shepard, Playback St. Louis 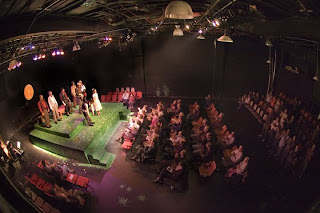 When New Line produced both Camelot and Man of La Mancha, people kept asking us why we would do such old-fashioned shows. Of course, the answer was that both shows still seemed as relevant as anything currently on stage, still addressing important political, social, and human rights issues we grapple with every day.

Now comes The Fantasticks and the questions persist. But once again, the answer is obvious. Like Into the Woods, written decades later, this Beat Generation fable presents a traditional Happily Ever After in Act One, and then deconstructs it, even mocks it, in Act Two.

In Act One of The Fantasticks, Matt and Luisa find a traditional, Broadway musical, Happily Ever After. But it’s tainted, predicated on a deception – like too much of mainstream American life. In Act Two, the disillusionment sinks in and they find that a relationship cannot be built on false romanticism. The Happily Ever After they had been promised all their lives runs smack up against the reality of Life. Like many young people today, they are surprised to find that Marriage is Hard. All the lovely lies of the American establishment, the Happily Ever After that the movies and TV promise, that mythical American Dream that only a few Americans actually get to enjoy, is revealed to be a fake. Like the musicals that would be written in the years to come, Act Two of The Fantasticks tells us that life is complicated, difficult, confusing, but that it is possible for clear-eyed realists to navigate this decidedly un-musical-comedy terrain if they can just see the world truthfully.

Despite its magic, its minimalism, its fable style, The Fantasticks looks at real life and real love like few shows do. And in a time in America when human interaction is trivialized, digitized, and commercialized beyond recognition, The Fantasticks urges us not to get caught up in the myth they’re selling so hard and to take a good close look at what matters most in this world – people. In this time when we can do our banking, our shopping, our bill paying, our movie-going, even our porn, all by interacting only with computers, this is a story we need to hear. And that’s why you’ll see very little set or props or costumes tonight – this is a show about people. We need to reshape our society back into one that values human connection above all else. Is it any wonder we go to war this easily when most of us are so disconnected from the rest of humanity?

Journalist Linda Elerbee once wrote this: “Will Durant said civilization is a stream with banks. He said the stream is sometimes filled with blood from people’s killing, stealing, shouting and doing the things historians usually record, while on the banks, unnoticed, people build homes, make love, rear children, sing songs, write poetry and whittle statues. He said historians (and journalists) are pessimists because they ignore the banks of the river. But the story of civilization, he said, is the story of what happened on the banks. Sixteen years ago, I saw The Fantasticks for the first time. This week, I will see it for the sixteenth time. Why? Because at least once a year I need to be reminded about the importance of what goes on on the banks, and how to get back to them. Deep in December, it’s nice to remember. The rest of the time, it’s necessary.”
1 comments