Return to the Forbidden Planet (2009) 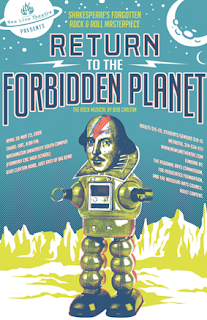 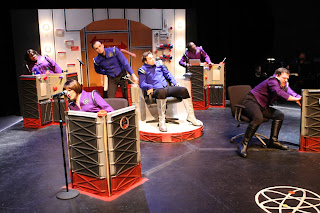 “Remember the halcyon days when we were terrified of the Russians, they were terrified of us, and Shakespeare wrote his first intergalactic R&B hit, “It’s A Man’s Man’s Man’s World?” Sweet fancy Moses, those were the days. Wait, that never happened. Or did it? Yup, looky here: Return to the Forbidden Planet. It’s sweet Billy Shakes vs. Golden Oldies vs. Space Age Love Songs. Just what Dr. Tempest ordered.” – Calendar Pimp, The Riverfront Times

“New Line Theatre presents a lot of intriguing work, but now and then it gets everything so right that you’re ready to see the show again before you’re out of the theater. Hair was like that; Bat Boy, too. And so is its new production, Return to the Forbidden Planet – a smart, giddy, musically ingenious spoof written by Bob Carlton and directed by Scott Miller.” – Judith Newmark, St. Louis Post-Dispatch

“Bob Carlton’s whimsical take on The Tempest as refracted through a 1950s sci-fi prism features a galaxy’s worth of fantastic rock & roll songs, punning wordplays on snippets of Shakespearian monologues and intentionally ‘Pigs in Space’ costuming (courtesy of Betsy Krausnick). But this is no parlor trick of a musical; there’s a rich vein of Shakespeare’s favorite ingredient – the wondrous depths of the human heart – that elevates the show from cunning stunt to artful meditation on the destructive nature of power and the redemptive power of love. . . Smart show, smart cast, smart director with an understanding of what’s going on under the notes and behind the dialogue – this is what audiences deserve.” – Paul Friswold, The Riverfront Times

“New Line artistic director Scott Miller meticulously blends the comic sensibilities of his talented cast with the brisk, jaunty style of the New Line band to make this foray into outer space a campy and delightful journey. There are stars aplenty in this cosmos.” – Mark Bretz, Ladue News

“The most delightful musical to hit St. Louis in many years. . . a wondrous evening of musical theatre.” – Joe Pollack, KWMU-FM

“Irresistible. Under the guidance of director Scott Miller, New Line Theatre is presenting a thoroughly engaging and enjoyable production . . . This is a fun show, and director Scott Miller has assembled a talented cast and crew that seems to be having a blast” – Chris Gibson, KDHX-FM

“Forbidden Planet plays for laughs, which it receives in abundance. . . [Director] Miller takes chances, and they nearly always pay off.” – Andrea Braun, The Vital Voice

“I’ll tell you one show in 2009 that thrilled me and delighted me. I went back to see Return to the Forbidden Planet three times, and I’ve heard it said that when a theatre critic goes back for fun, that’s a good sign. I thought it was absolutely brilliant. . . It was exhilarating, it was really was.” – Judith Newmark, St. Louis Post-Dispatch on KDHX-FM 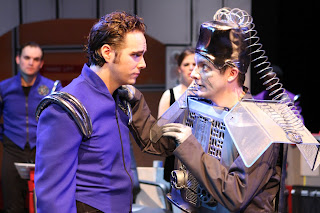 Return to the Forbidden Planet is wacky and chaotic on the surface, but it’s also really smart, retaining the serious themes of its earlier versions, William Shakespeare’s The Tempest and the 1956 film Forbidden Planet.

Just like the film and the play, Return to the Forbidden Planet is about the idea of expanding human consciousness with technology (or Jedi-like magic in the original play), unknowingly releasing the dangerous power of the human id, and thereby butting up against that timeless and universal truth, that power corrupts and absolute power corrupts absolutely.

Today, more than ever before, we are developing many new technologies that literally expand the boundaries and power of human consciousness, through the internet (and its various applications, Facebook, Wikipedia, YouTube, and so many others), the iPhone, the Blackberry, and more devices coming every day. Dr. Prospero’s discovery and use of “telegenesis” is a clear metaphor today for the creation of blogs, viral videos, online discussion groups, social networking sites, and much more. Not only does human consciousness now extend beyond our physical selves, it extends around the globe. A blogger’s voice, his thoughts and ideas, are instantly materialized in every corner of the planet, and we’re getting closer and closer to those ideas being instantaneously translated, so that even language will no longer be a barrier.

We’ve only begun to understand what this revolution means. It will change the world as much as electricity and television have. Moore’s Law says that the microchip doubles in capacity every eighteen months (this pattern has held since 1958). With that in mind, imagine what technology will look like in twenty-five years, and Dr. Prospero’s Id Monster suddenly seems a bit less ridiculous.

Return to the Forbidden Planet has at the center of its tale the biggest of all moral questions: should we restrict or block science, even when it crosses into moral gray area? Dr. Prospero’s discovery seems to him a giant step forward for humankind, an expansion and extension of human consciousness greater than any that has come before. But he doesn’t foresee the inherent downside, that he would greatly intensify the mind’s power without also greatly increasing the mind’s ability to control itself. It’s a problem illustrated by the old joke, “Don’t think about an elephant” – it’s nearly impossible to do because the mind is hard to consciously control. In any arena, increasing power without increasing control usually leads to disaster, and it’s a problem we keep bumping up against as we continue to evolve.

Decades ago, we discovered nuclear power, but we still can’t control or contain it. The world’s greatest fear today is that Iran or North Korea or, worse yet, a band of rebel terrorists, will use a nuclear bomb. We increased our power without sufficient control. We invented the internet, wildly expanding the reach of human consciousness, but with it came online predators, the loss of privacy, and the erosion of the idea of copyright. Again, we increased our power but we still can’t control it (though some believe the internet should never be controlled). And two of the newest technologies, gene mapping and embryonic stem cell research already scare people who foresee cloning and “designer babies.” This is the real issue at the heart of Return to the Forbidden Planet, and it’s why this remains a fascinating story.
0 comments