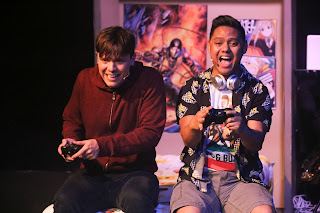 “One of the coolest, freshest comedic musicals in years!. . . what makes Be More Chill work stunningly (stunningly, I tell you) is that it is wholly relatable to a new generation of theatre patrons. It includes edgy, modern pop references and sharp humor that extends all the way to Sarah Porter’s fantastic costuming and Kimi Short’s spot-on props. It features modern-day teen characters who speak modern-day lingo, who dress in modern-day fashion, and who cleverly and intriguingly use modern-day technology onstage. . . And really there are so many juicy, poignant, and truly funny moments in this fast-moving musical, you’ll want to lean in and listen hard so you won’t miss a single line. . . I can’t even begin to convey just how refreshing it was to see an audience respond so enthusiastically to musical theatre. It was almost as if the teenagers in the house were calling out, ‘Thank you! You see us!’ Productions like this are exactly what contemporary theatre needs to cultivate new audiences and Be More Chill certainly delivers on that tall order.” – Tanya Seale, BroadwayWorld

“Be More Chill is the perfect show for New Line. It has the rock spirit of American Idiot, and the high school drama of Heathers – two shows they have staged incredible productions of in the past. Throw in some sci-fi and technological elements, and you have a kick-ass rock musical about growing up in modern times. If I’ve said it once, I’ve said it a hundred times – Artistic Director Scott Miller has a seemingly supernatural ability to find the best shows and bring them into the spotlight. In the case of Be More Chill, it was already rediscovered – but not before Scott got his hands on it. With Mike Dowdy-Windsor, who he co-directed the musical with, they staged one of their best productions in recent history.” – Kevin Brackett, ReviewSTL 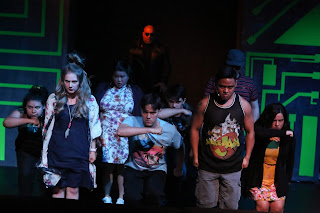 “Under Mike Dowdy-Windsor and Scott Miller’s bright direction, New Line’s Be More Chill is a startlingly fresh musical that avoids cliche to tell an exciting and at times very funny story about modern teenagers with a sci-fi twist. . . . As good as Joe Iconis’ songs are (and the New Line band, led by Marc Vincent, plays them very well indeed), Joe Tracz’ book is equally compelling. An off-hand factoid about stagnating human evolution dovetails quite tidily with the Squip’s motivations for disseminating more of itself through the school. This is the real menace of life lived by remote control, and everything in Be More Chill hinges on someone ‘just saying no’ to technology-laced drugs. For all its charms and honesty about the bad decision-making of high schoolers, Be More Chill’s gripping conclusion proves that not everyone takes the easy way out. It takes only one brave teen armed with a fondness for retro ‘90s culture to stop the madness. Uncoolness never looked so good.” – Paul Friswold, The Riverfront Times

“Be More Chill, the nonstop hilarious musical. . . is a perfect match for the playfully exuberant New Line style. Co-directors Mike Dowdy-Windsor and Scott Miller establish and explore a groove in which the energetic songs and irreverent humor create an atmosphere of sheer exhilaration. And the cast is outstanding. . . Teen angst has rarely been so entertainingly outrageous.” – Calvin Wilson, St. Louis Post-Dispatch

“Every generation has a musical that captures the zeitgeist of the moment, that speaks to them in a special way. My generation of Baby Boomers had Hair, Gen X had Rent, Millennials had Spring Awakening and now Generation Z has the current cultural sensation Be More Chill. It’s fierce, fun and frisky. . . The well-cast ensemble, playing 11 characters, sparkles. Each one has taken this show to heart with so much enthusiasm that it carries over to the audience, which included many young fans expressing their delight at every opportunity on opening night. Their joyous embrace of a show that defines how they feel, look and act is refreshing. The powerful connection between actors and theatergoers is electric and palpable. The performers feel every word and the audience responds in kind. . . Be More Chill is fresh and funny, and not in a jaded ‘we’re so clever and smart’ way, but with real heart, and that may be the most important aspect – the emphasis on real. The musical, in lyrics and book, speaks to us in a captivating way that transcends labels and genres. It targets our humanity. To make people feel less alone in this world is a remarkable thing.” – Lynn Venhaus, St. Louis Limelight

“New Line Theatre takes on teen angst and social anxiety with a spectacular production of Joe Iconis and Joe Tracz musical interpretation of the novel Be More Chill by Ned Vizzini. Directors Scott Miller and Mike Dowdy-Windsor have assembled a phenomenal cast, headed by Jayde Mitchell, Kevin Corpuz and Grace Langford, and ensure that every detail supports the compelling story. Musical director Nicolas Valdez and conductor Marc Vincent provide driving arrangements that keep the pace quick while complementing the individual voices and shared harmonies. Though the plot trajectory is familiar, the results are relatable, funny and thoroughly captivating. . . . The energetic musical rides through the highs and lows of teenage emotion like a multistory roller coaster through a dense forest – you’re never 100% certain which way the story’s going to twist and it might fall off the rails at any moment, but the ride is a total blast.” – Tina Farmer, KDHX 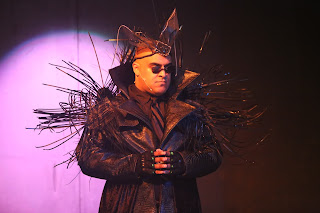 “Be More Chill is a compelling excoriation if you’re young, and a sort of vintage/antique shop of the mind if you’re old, as we all struggle to understand this brave new world. . . . Be More Chill is built around the classic conflict of individualism and the pressure to conform to a group identity, which seemed to delight the younger members of the audience opening night. And the struggle between those two forces becomes unexpectedly wrenching and dark near the end....” – Richard Green, TalkinBroadway

“This is a perfect New Line show, and how Scott Miller managed to present it so soon after its Broadway opening (in March) is a wonder. Once again, Miller and co-director Mike Dowdy-Windsor have pulled together a young, talented cast, still scratchy around their rough edges, to tell a story almost anybody who went to high school can appreciate. . . the intimate, bare-bones style of New Line’s production truly suits a show about a situation that everybody goes through but that each of us has to experience alone.” – Judith Newmark, All the World’s a Stage

“Be More Chill should be on everybody’s radar. I am sure a lot of other local theatre groups will be performing it over the next few years, but the regional premiere run at New Line is truly special.” – Jeff Ritter, Critical Blast