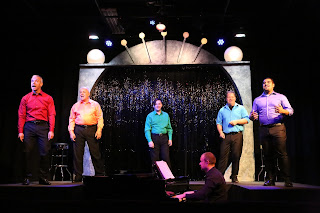 “New Line Theatre loves setting convention on its ear, so this selection of brassy, sassy, tender, and touching songs is a refreshing summer tonic, a valentine to ‘Love is Love is Love’.” – Lynn Venhaus, OnSTL

“The return of Out on Broadway is a rewarding opportunity to reflect on social progress.” – Gerry Kowarsky, Two on the Aisle

“Somehow, under the direction of New Line founder Scott Miller, we end up teetering on the brink of some new discovery, as yet unknown, with a silvery-voiced anthem of unity and understanding. . . Outside of a revue like this, how often are you going to get to hear all these great, obscure songs performed live? New Line hasn’t done a wise, searching sampler like this, filled with amazing pieces, in 17 years. So if you've ever been in love with musicals, don't miss this show. ... It's a thoughtful and kind evening of rare songs and fine performances—with a lot of unexpected hilarity thrown in.” – Richard Green, TalkinBroadway

“Director Scott Miller has once again put together a show that transcends simply good music and talented performers. The most important takeaway is that love is universal, and no matter who the songs were written for – they all apply to people in love. Never does a number fail to work because of the casting – forget that they are all talented – but that they are all male. It doesn’t matter, and never does a song not feel right because it was originally performed between a man and a woman. And that is a perfect example of how love works between all people. The humanity of the show shines throughout, and it is a wonderful evening of musical theater for all to enjoy.” – Kevin Brackett, ReviewSTL

“It’s as stripped down to the bone as a New Line production will likely ever get, and that’s perfectly fine, because the music is pretty great. . . As a straight man, there were no moments lost on me because I don’t ‘get’ gay culture. That’s the biggest takeaway from Out on Broadway: The Third Coming – there really isn’t that much difference between hetero or gay couples in love. Love is just love. That’s why you can pick songs from all over the musical map and still feel the relevance and the emotion even if they’re sung by or to a different gender than originally performed. If anything, I’d say this production would appeal mostly to well-versed fans of musical theatre as much as appealing to your romantic preferences.” – Jeff Ritter, Critical Blast 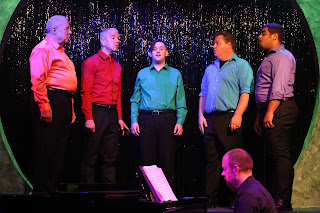 “Out on Broadway: The Third Coming lights up The Marcelle with music and love. . . The show loosely traces the progression of love, beginning with the idea of loving and accepting oneself before loving others, but there's nothing heavy handed or preachy in the message. The selected songs, primarily lesser known musical gems that deserve a listen, complement each other well while adding humor and genuine pathos to the evening. For the 2017 edition of the revue, company artistic director Scott Miller added numbers from recent shows that prove a surprising fit. . . the men interpret every song well, with intention and perspective that's clear, genuinely expressive, and uniformly well performed.” – Tina Farmer, KDHX

“If you didn't catch it you really missed an exceptional theatrical cabaret of sorts, which was truly wonderful, and which I hope sparks a fourth coming! . . . New Line Theatre’s Out On Broadway: The Third Coming was filled with shimmering and beautiful tunes from shows, many of which New Line produced over the years.” – Chris Gibson, BroadwayWorld

“Out on Broadway: The Third Coming is a pleasant little evening that puts the focus – albeit from a different angle – on a collection of songs which underscore the ever-changing musical vitality of Broadway.” – Mark Bretz, Ladue News

“Scott Miller and Nate Jackson, the pianist and music director, give the show an easygoing mood, favoring sophistication over splash. Out on Broadway: The Third Coming feels as if it could have played a supper club, but of course it could not have existed in the days when supper clubs flourished. The Marcelle makes a good alternative.” – Judith Newmark, St. Louis Post-Dispatch

“There’s a great collection of songs here, and seeing them presented in a new context, and with the overall theme of the lives and loves of gay men in America in 2017 is an illuminating experience. This being ‘part 3,’ I found myself watching the show this time wishing I could have seen parts 1 and 2, especially considering how much culture has changed in the last 20 years. Overall, Out On Broadway: The Third Coming is a great opportunity to hear from these talented men and see life through their eyes, and hear it through their voices. And what impressive voices they are, as well.” – Michelle Kenyon, Snoop’s Theatre Thoughts

“Out On Broadway: The Third Coming, which runs through August 19th at The Marcelle Theatre is not only a whole new experience with brand new Broadway hits, but also has added a jewel in its crown thanks to the premiere of the original new song, 'Hope' by Jason Robert Brown. . . The charm of the production is how Scott Miller bends and shapes some songs that are otherwise sung by females in their original shows, to being sung by the men in the company, giving a whole new meaning to the experience. . . Out On Broadway: The Third Coming comes together thanks to the well-disciplined velvety voices of the cast, which includes Dominic Dowdy-Windsor, Mike Dowdy-Windsor, Ken Haller, Sean Michael and Keith Thompson, who all sang their hearts out for a very appreciative audience, especially those who have had the joy of experiencing all three incarnations of the production.” – Keaton Treece, St. Louis Limelight 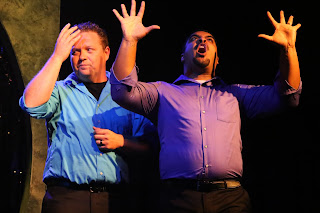 Out on Broadway: The Third Coming is the third installment of something I never expected to have even a second installment.

Back in 1996, I put together an evening of theatre songs to be sung from a gay perspective, and we called it Out on Broadway (OOB, for short.) Without rewriting anything, we gave songs like "We Kiss in a Shadow" from The King and I, and "In My Own Lifetime" from The Rothschilds, entirely new context and new resonance. The show had very little staging, no “costumes” really, just a stage with a piano and a couple stools. Looking back, I think my model was the original Side by Side by Sondheim.

The show sold out the run in March, so we brought it back for another sold-out run in August, with just a couple tweaks to the song list.

A few years later, our cast album for the original OOB was finally being released (yes, you read that right, we made a cast album!), and it occurred to me that a second edition would be fun, so we created Out on Broadway 2000, quickly dubbed by us OOB2K. This time we did a few songs from the first show, but found a lot of new ones.

Then last year, talking about New Line's season, our associate artistic director Mike Dowdy-Windsor mentioned Out on Broadway – could we do another one? The more I thought about it, the more I liked it. Twenty-one years after the first one debuted, we need Out on Broadway right now more than thought we would.

We’ve brought back some of our favorite songs from the other two editions, and we’ve added new songs that weren't even written yet in 2000. Though our show explores a bunch of issues, the main agenda for the evening is just to take a look at gay lives and gay relationships – more than anything, to reveal how much like our straight friends we are.

When we did the original OOB in 1996, Will & Grace wasn't on the air yet, and in fact, the odious, Orwellian-named Defense of Marriage Act was passed just a month after we brought OOB back for its encore run. Even for our second edition in 2000, gay Americans still didn't have equal marriage rights anywhere in the country. It's a different world now. But it's still a world that needs to hear our voices, maybe right now more than ever in these tumultuous times.

We've put together a terrific song list for you. If you've seen the last two editions, you'll love what we've kept, and you'll also love the new gems we've found. If you’re new to OOB, welcome!