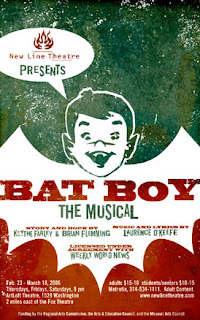 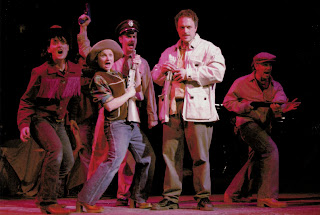 “New Line’s artistic director, Scott Miller, has brought Bat Boy back in all its screwball glory. It is a moment to savor… Bat Boy is just as much fun as it was the first time around… This is musical theater for audiences who think that musical theater can’t be hip. They’re in for a very smart surprise.” – Judith Newmark, St. Louis Post-Dispatch

“New Line Theatre scores another hit this season with its wacky musical, Bat Boy: The Musical… Congratulations are in order for Miller and his amazing cast/crew for putting the fun back in musical theater. This production will definitely be in contention for my best show of 2006. Kudos to New Line Theatre!” – Jim Campbell, Playback STL
“Part spoof, part fantasy, part plea for tolerance and understanding and love, part rowdy and raucous musical comedy, Bat Boy adds up to outstanding entertainment, and the New Line Theatre production brings the evening to exciting, high-powered life.” – Joe Pollack, KWMU-FM

“Some shows are just too much fun to let slip away. In that vein, nearly the entire cast of New Line’s 2003 Bat Boy has returned to sink their teeth into this show (and into American life) one more time. They do a spectacular job with a silly comedy full of deep meanings, under the highly organized direction of Scott Miller… as always, it comes down to great singing and great comedy. This show has more than enough of each to draw us out of our own mid-winter’s bat cave, foraging for fun.” – Richard Green, KDHX-FM 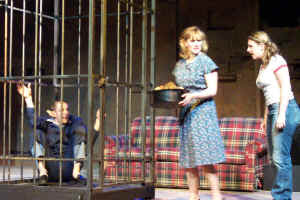 It’s rare that a piece of theatre becomes more relevant the older it gets but sadly, Bat Boy is doing just that. Prejudice and intolerance in America just keeps getting stronger and more pervasive.

In the aftermath of Hurricane Katrina, all of America was saddened to see that almost all the people left behind in New Orleans were poor African Americans. No one had even considered that most of them did not own cars and therefore couldn’t get out of the city by themselves. As days went by with no hope of rescue, most of us felt nothing but shame for our country. As far as our government was concerned, these Americans apparently didn’t matter.

In December, the rabid right-wingers declared that there was a War on Christmas. Why? Because too many of us were acknowledging other religious and cultural traditions by offering friends and family the more inclusive “Happy Holidays.” To so many religious conservatives, the act of including Hanukkah, Kwanzaa, Ramadan, or other winter rituals in our good wishes was the worst kind of blasphemy. It seems only Christmas is worthy of mention in America, even for non-Christians.

And still today, some in Congress and the White House want to amend our Constitution to make gay marriage illegal, forever enshrining their prejudices and demoting ten percent of Americans to second-class status. None of the people “protecting marriage” can ever explain how two women getting married endangers a straight couple’s relationship, but that doesn’t slow them down. Sounds like the kind of hysteria surrounding Edgar in Bat Boy.

And in the Southwest, there are now vigilantes aggressively going after undocumented immigrants from Mexico, forgetting that almost all our ancestors came to America from other lands, all with the same dream of liberty, peace, and hope for the future. And of course, we’re told these immigrants are to blame for a whole litany of America’s ills.

And then there’s Iraq, a country we invaded for less than legitimate reasons, and upon which we’re now trying to impose our culture and our governing system without bothering to understand at all their culture and their desires for their country. Apparently, nobody really understands morality and justice except us. Again, it sounds a lot like the townspeople in Bat Boy.

But maybe Bat Boy's greatest strength is that though it’s about all these important issues, it never bludgeons the audience with them (though, as you may know from our other shows, we’re not entirely opposed to bludgeoning now and then). I’ve always believed theatre to be potentially one of the most powerful forces for change because it can address issues without an audience noticing. It can personalize and humanize. It can get people thinking without them realizing it. It’s sneaky that way. Kinda like a hopped-up kid creeping up on a defenseless little bat boy in a cave. But I digress…

We hope you enjoy getting to know the bat boy tonight as much as we have enjoyed it. He may have fangs, big pointy ears, and an unfortunate taste for fresh blood, but the world could use a few more like him. And instead of demonizing all who are different from us, we would do well to consider that maybe they aren’t the monsters, after all…
0 comments