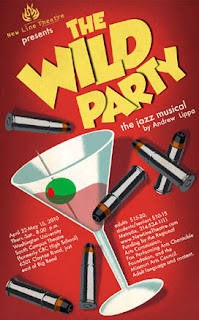 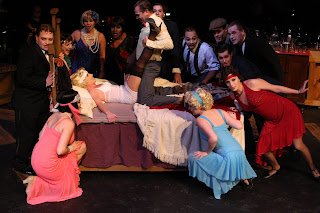 “They call themselves the bad boy of musical theatre in St. Louis and they are – this is a very adult show. . . If you like shows like Cabaret and Chicago, you’ll like The Wild Party. . . You’re going to see really good, well done adult theatre at New Line that nobody else really attempts here in St. Louis. . . It’s a good strong cast with a couple of really, really, really strong individual performances.” – Harry Hamm, KMOX-FM

“Andrew Lippa’s musical adaptation of Joseph Moncure March’s epic poem, The Wild Party, is a brilliant work, especially if you’re anything like me, and you like your entertainment on the dark side. It’s a decadent jewel gleaming with sinister possibilities, and thus, far removed from the current trend toward sunny shows with predictably happy endings. Though set in 1928, it manages to perfectly capture the current mood of cynicism that seems to have run rampant through our country over the course of the last fifteen years. New Line Theatre’s current presentation of The Wild Party is a deliriously engaging experience, easily making it one of the best productions of the year so far.” – Chris Gibson, BroadwayWorld.com

“Imagine a strobe-light flashing rapidly; or a coin flipping in the air, heads becoming indistinguishable from tails as it spins. Likewise, the flashing strobe creates an effect somewhere between bright light and pure dark, as the transitions themselves become a blazing, third state of energy. So it is with Scott Miller’s fantastic new production of Andrew Lippa’s The Wild Party… Thanks to the cast’s combined expertise and with the help of director Miller, they turn in a solid-gold hit. It’s almost like the American answer to Cabaret, leading us up to the edge of the Great Depression. But, like America itself, it keeps its brave face on, dancing right to the bitter end. Don’t miss this excellent show.” – Richard Green, TalkinBroadway.com

“With so much blood and tawdriness as its inspiration, you’d think The Wild Party would celebrate the ugly side of humanity; it definitely doesn’t shy away from sin and vice and everything nice, but there’s a morality at the center of the play shining out from beneath the filth. . . By the end of the night, Queenie wonders how everything ended so poorly between her and Burrs; how did ugliness supplant their love? When was the first unkind word spoken? When was the first blow struck? When did it all turn to shit? These are the questions not just of a failed relationship, but of the end of any gilded age. The Wild Party shows you in lurid detail the dying moments of just such a relationship and an age, and it’s difficult if not impossible to ask the same questions of the first decade of the 21st century when the lights come back up.” – Paul Friswold, The Riverfront Times

“A large number of fine performances, spot-on, rapid-fire direction by Scott Miller and plenty of sex make the show fast-moving, highly entertaining and oh, my goodness, bawdy and naughty. In other words, while there’s no real sex and no nudity, there’s a great deal of simulated sex that follows a large amount of foreplay, including much kissing while groping, stroking, squeezing, rubbing and other touchy-feely stuff. Not for the children and the easily embarrassed. “ – Joe Pollack, St. Louis Eats and Drinks

“If you like your tragicomedies with a dash of self-analysis and a heaping helping of sex, you’ll want to RSVP in the affirmative to The Wild Party, produced by New Line Theatre. . . The play is a good fit for director Scott Miller and New Line, which bills itself as The Bad Boy of Musical Theatre.. . . ‘People die and parties fail,’ Queenie notes in her finale. But even though her party ended badly, The Wild Party does not, leaving its audience entertained and with enough food for thought to last until the next New Line musical.” – Nancy Fowler Larson, St. Louis Beacon

“A fascinating and absorbing show that capably showcases Lippa’s talent for interesting lyrics and lively music. New Line artistic director Scott Miller’s direction is disciplined, focused and consistent throughout, and he benefits from some exemplary technical support as well as solid portrayals by his large cast. The result is an ambitious and laudatory effort that is richly rewarding. . . The subject matter is definitely adults only material, but The Wild Party tells an interesting story in lively and engrossing fashion.” – Mark Bretz, The Ladue News

“The Wild Party takes you on a wild ride. . . In 1928, writer Joseph Moncure March sketched the New York demimonde in an epic poem, The Wild Party. He might as well have wrapped it up in a package for Scott Miller, artistic director of New Line Theatre, to open 82 years later. . . Few musicals are so graphic as this one, which is absolutely not for the family. This time, Miller has spilled everything onto his stage: bootleg, blood and other bodily fluids. From the first scene, we can almost predict the outcome. Someone’s bound to slip and get hurt.” – Judith Newmark, St. Louis Post-Dispatch 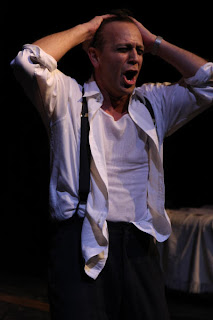 At first, I saw a strong parallel between The Wild Party and the many scandals and embarrassments of the last ten years in America (Enron, AIG, wars and tax cuts that weren't paid for, dishonest political debate, really disturbing reality TV, screaming pundits on cable TV) – lots of selfishness, immorality, irresponsibility, disregard for others, lies, betrayals. A me-first attitude that ignores all the obvious ramifications down the road.

But I also see another, perhaps more interesting parallel – the death of civility. There's such a nastiness in our national discourse now, arguably going all the way back to 1994 and the Gingrich Revolution. Before that, politicians compromised and cooperated. In the 1980s, President Reagan and Democratic Speaker of the House Tip O'Neill would go to battle over some issue, work until they found a compromise, then have a drink together when it was all over. Not anymore. Can you imagine current Congressional Republicans kicking back with President Obama after the healthcare bill passed?

The Wild Party seems to be metaphor or microcosm for those moments in American history when anger and fear supersede reason and decency. It happened during the Depression and during the 1960s. In recent days, protesters in Washington, DC have actually spit on members of Congress, calling them "nigger" and "faggot." Is that all that far from Burrs calling Queenie a "lazy slut"? It's not a surprise that Andrew Lippa wrote The Wild Party during the latter years of the Clinton presidency.

This isn't as dark a show as Love Kills, because at least in The Wild Party, there is some self-awareness, some clarity, maybe even redemption of sorts, at the end. As the show ends, Queenie asks the partygoers – and the audience – “How did we come to this?” But the real question is will we ask ourselves that after we leave? And if we do, what will we do with the answer?

If there is a message here (I keep telling the cast that this is a fable at its heart), maybe it's that those darker impulses and emotions are inside all of us, and we're not always conscious of when they take us over. It requires real effort and vigilance to keep those dark forces at bay, to keep them from destroying the people around us and ourselves (a message this show shares with Bat Boy). It's not always easy to be civil, but when we give up trying, we get America in 2010...


We're all so sure.
We're all so wise.
No limits, no boundaries, no compromise;
Laughing at our neighbors,
Smiling through a hiss,
How did we come to this?