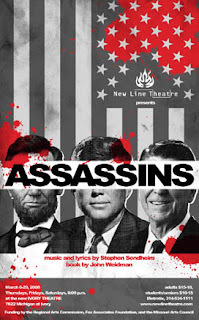 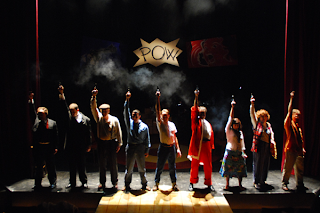 “[New Line Theatre’s] Assassins is essential theater for people who disdain musicals because they think they’re too pretty, too silly or just dumb. This ugly, serious, very smart production adds up to one of the most challenging theater pieces to play here in ages. . . But underneath all the entertainment lurks a serious question: How did picking up a gun turn into a way to say, ‘Here I am’? And how do we make that change? We have no answers on this stage – just acute questions that deserve to be raised.” – Judith Newmark, St. Louis Post-Dispatch

“[Director Scott] Miller’s direction is subtle but tight. He moves his players around the stage, and even the auditorium, with grace and authenticity. Russell J. Bettlach’s costumes evoke the eras in which they lived. The assassins remain on stage when they aren’t directly involved in the action. They sit quietly in nine chairs on a simple set surrounded by a few props, including an ominous package that Oswald believes are curtain rods until Booth reveals the rifle beneath the wrappings. The rest of David Carr and Jeffrey P. Breckel’s set is simple with an ingenious, large wooden piece to serve various purposes and three graphics hanging above. Stephen Moore’s lights deserve special mention because they are key to the various moods of madness, elation, fear, and sorrow that this roller coaster of a show evokes. On stage, excellent support is provided for the voices by the New Line Band.” – Andrea Braun, KDHX-FM

“Seated like the sides of a parenthesis in the middle of the stage are nine dysfunctional figures. Collectively, they slump their shoulders, keep their eyes to the ground and convey the impression of the misfits that they are. All presidential assassins or would-be assassins, they come together here, in a breezy one-act musical, to tell us why they did what they did, not for forgiveness. With a book by John Weidman and music and lyrics by Stephen Sondheim, Assassins crackles with energy, comedy and sassy class.” – Mark Bretz, Ladue News

“If you’re looking to add another notch to your Sondheim gun belt, here is an infrequent opportunity to see a cynical, unsettling entertainment by the defining theater composer of our generation.” – Dennis Brown, The Riverfront Times 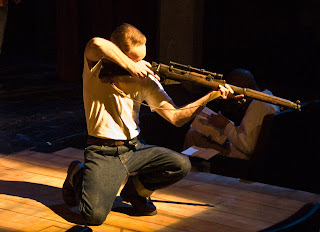 A few months ago Benazir Bhutto, the former and possible future prime minister of Pakistan, was assassinated. In 2005, televangelist Pat Robertson publicly called for the assassination of Venezuelan president Hugo Chavez. Also in 2005, a would-be assassin tried to kill George W. Bush while in the former Soviet Union. Wikipedia lists forty attempted assassinations of world leaders since 1990.

In other news… this month the Supreme Court will finally tackle the question of whether the Second Amendment to the Constitution gives implied gun ownership rights to individuals or only the rights it specifically spells out to state-run militias (i.e., the National Guard). The last time the Court addressed this issue was in 1939 (U.S. v. Miller) when it ruled that the amendment was intended by the framers only to allow states to raise militias without federal interference and had nothing to do with private ownership of guns. It’s hard to watch Assassins today without that issue in our minds, plagued as we are with 30,000 deaths and 100,000 injuries from guns every year. Why do Americans love guns so much?

And why are we so fascinated by American political assassination? Why are so many people convinced that Kennedy’s assassination was a conspiracy? Why are there so many books about Lee Harvey Oswald and John Wilkes Booth? Part of the answer may be the never ending human quest to understand ourselves and our world – the same reason we make theatre. Can we learn about our own demons by studying these assassins? Part of the reason is that we all agree on certain things in civilized society, like that we won’t kill each other. When that compact is broken, particularly in such a high profile way, it makes us wonder which compact will be broken next. Can we still rely on the other things we’ve all agreed to?

Or is there an even darker fascination at work here, a uniquely American obsession with violence and the power it brings, which usually manifests itself harmlessly enough in ultra-violent video games and Rovian politics, but also sometimes in political doctrines like “preemptive war”?

Perhaps our fascination with political assassination comes from the knowledge that such a tiny moment, such a small, individual act can literally change the world in an instant. How can that be possible? And if it is possible, can we believe in the sureness of anything? Though these nine assassins are the show’s protagonists, still, in a moralistic sense, these assassins are villains and the audience – the American people – are the real protagonists. Or are they? What does it mean for a piece of theatre when the villains are the heroes and the heroes aren’t on stage for most of the show? What does it say about America?

But Assassins isn’t a show about right and wrong; it’s about why. It's about hearing the other side of the story, getting closer to these assassins than we normally would, standing in their world for ninety minutes, and realizing, perhaps to our horror, that they’re not that different from us…
0 comments