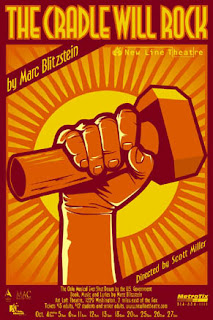 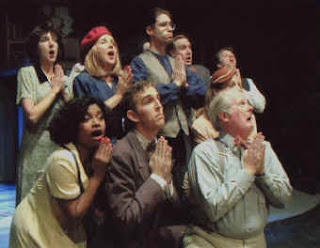 “Most Ambitious Production of 2001” – Judith Newmark, St. Louis Post-Dispatch, “The Year in Theatre”

“The Cradle Will Rock is one of the most memorable shows I have ever seen. This joint venture is not only brilliant in idea, but also in execution.” – Tony Burnett, Talkin Broadway.com

“A spirited, entertaining production . . . absurd and chilling at the same time, the perfect blend of musical form and content.” – Brian Hohlfeld, The Riverfront Times 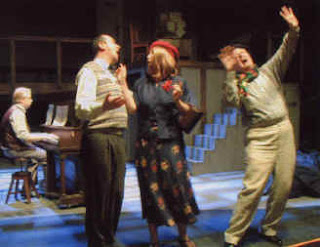 You arrived around 7:30 tonight at the Maxine Elliott Theatre to see the new musical The Cradle Will Rock, written by Marc Blitzstein and directed by Orson Welles. Welles is that amazing young director who staged the all Black version of Macbeth up in Harlem, the one they called the “voodoo Macbeth.” You can’t wait to see his newest project. You heard they’ve already sold 14,000 tickets in advance for this show.

But when you got to the theatre, it was padlocked and there were armed guards surrounding the building. Nobody seemed to know why. A crowd was gathering and Mr. Welles and the producer John Houseman kept promising the show would go on tonight. While you waited, actors from the show performed outside the theatre, dancing, singing, anything they could think of…

Finally, around 8:00 p.m., the 22-year-old Welles appeared again with Houseman at his side, and they announced that The Cradle Will Rock will be performed after all, at the Venice Theatre, twenty-one blocks uptown. They invited everyone to join them there for the opening night of this remarkable new musical. Like almost everybody else, you decided to make the trek up to the other theatre, and along the way, as hundreds of others joined the crowd, everyone was talking about the show. What’s it about? Why was the theatre padlocked and who sent the armed guards?

You get here to the Venice Theatre and the atmosphere is absolutely charged with electricity. For all you know, the police are going to bust in any minute and raid the place.

You heard on the way up that this musical is about labor unions, and few issues are more timely right now – or more explosive. Last year, there was no hint of any unions at U.S. Steel, but by February of this year, just five months ago, the steel workers unionized. Workers are going on strike all over the country now, and factory owners are calling out police or the National Guard or both to crush these rebellions. You read in the papers that in a lot of these sit-down strikes, people have been killed in the ensuing riots or in suspicious explosions at union headquarters. You read that just two weeks ago, Chicago police killed ten people and injured sixty in a labor riot.

In response to this new national union movement, anti-labor organizations are springing up all over America, with pseudo-patriotic names like the Liberty League, the Citizen’s Alliance, and others in the same vein.

You wonder who would write a musical comedy about all this.

But tonight’s performance promises not only to be the first public showing of a new musical, but also an act of brazen defiance by its creators – and by this audience – a potentially dangerous act if the police do show up and raid the theatre.

Who knows – tonight just might go down in history…
1 comments