“Lizzie explodes on the stage with a ferocious, hard rock energy that suits the murderous tale. New Line Theatre takes a boisterous swing at the legend of Lizzie Borden with Lizzie, a rock ‘n’ roll musical that’s one part horror story, one part rock opera, and all riot grrrl fury. The all-female cast attacks the concept with zeal and the result is hard rocking storytelling that grabs you by the collar and doesn’t let go until the final chord. . . Theatergoers who enjoy a driving beat, insistent melodies, and powerful vocals will find the show easy to embrace and a lot of fun to experience. From the haunting opening notes to the final anthemic rendition of ‘40 Whacks,’ New Line Theatre’s Lizzie grabs your attention and compels you to listen. “ – Tina Farmer, KDHX

“Lizzie is a unique musical experience, and I was absolutely blown away by it. . . New Line Theatre has put together a production that’s like the coolest rock concert ever, and I cannot recommend it highly enough. . . New Line Theatre’s production of Lizzie is a creative and imaginative juggernaut that is led by a stellar creative team, and some magnificently talented actresses and musicians. I say it all the time with New Line shows, but this one rocks especially hard. Get out and see it, repeatedly!” – Chris Gibson, BroadwayWorld

“Director Mike Dowdy-Windsor helms this raucous production, which fuses a punk rock attitude with slashing, guitar-driven rock. . . All four power the second act to its conclusion, which hints at happiness but ultimately implies that Lizzie Borden’s life was forever shadowed by the events of that day. The final song is an audience singalong of the playground ditty ‘Forty Whacks.’ It’s a solemn reminder that a woman can get away with murder, but she can never escape society’s judgment.” – Paul Friswold, The Riverfront Times

“A stylish, engrossing two-act show. Through director Mike Dowdy-Windsor’s new staging of Lizzie at the Marcelle Theatre, the 1892 mystery gets a great rock-opera treatment – but one that’s also drenched in psychological pathos – with a lot of fine visual and musical elements, and (more importantly) with New Line Theatre’s trademark soaring singing harmonies, from four first-rate actresses. . . It’s very compelling in this intimate setting, with a six-person band and lots of colorful, smoky rays of light pouring down, helping fill out the rock-concert motif. And it all becomes a great moral cause for for the audience, as a psychologically wounded Lizzie takes justice into her own hands – in a pounding, exciting, and beautifully assembled musical production, with lots of surprisingly good rock anthems and ballads.” – Richard Green, TalkinBroadway

“‘A sizzling, sensational rendition of a rock musical built around the infamous 19th century murder case that became a cause celebre and part of American folklore. . . Lizzie is full of energy, lively and extremely likable music and a quartet of engaging, appealing performances by its players. Add Lizzie to the rich artistic trove of adaptations and interpretations of one of America’s enduring criminal stories.” – Mark Bretz, Ladue News

“New Line Theatre’s Lizzie Is The Rock Musical At Its Absolute Best. . . if the cast of New Line Theatre’s hard rock musical Lizzie was an actual band they’d be number one with a bullet...or more accurately a hatchet. . . The fun is in watching these four supremely talented actresses pour everything they have into a collection of original songs. . .Director Mike Dowdy-Windsor has put together a hit show that will be talked about for years to come by anyone who sees it. Memorable songs belted out by four voices that would make ‘The Red Rocker’ Sammy Hagar green with envy makes this production the must see event of the fall in St. Louis. Get your tickets now because I predict that the entire run of Lizzie will sell out as the buzz makes its way through St. Louis’ ever-expanding theatre scene.” – Jeff Ritter, Critical Blast

“Take one lurid unsolved mystery – the notorious Lizzie Borden case. Smash conventions. Add four fearless females with punk rock energy, raging hormones and righteous anger, and the result is the bold, bewitching headbangers’ ball Lizzie. These rebels with a cause are a fierce force, and grab hold with gusto from the start. They feel these roles in every molecule of their being, unleashing fury and outrage as oppressed women who discover their own voices. . . Don’t think for a second that Lizzie is one note. It has surprising depth, and that’s a credit to the well-rounded skills of its cast. Four of my favorite actresses in town seize the night, and own that stage. New Line Theatre resists any attempt to go for gimmicks, instead presenting passionate performances that ring true.” – Lynn Venhaus, Belleville News-Democrat

“There are lots of musicals that deal with disturbing subject matter, and New Line Theatre makes it its business to track them down. But Lizzie is in a class by itself – a hard-rocking, riot-grrrl explosion of rage, nerve and the best goth/steampunk/rollerchic costumes ever flaunted on a St. Louis stage.” – Judith Newmark, St. Louis Post-Dispatch

“The story still captivates more than a century later, and New Line Theatre seems a fitting company to stage this defiant, mostly sung-through musical inspired by her, told in the language of unchecked rebellion – straight-up rock. . . No one will ever know precisely what went down in the House of Borden back in 1892, but this heady retelling will force any condemnation to the back seat. Basking in the glow of Lizzie’s liberation is much more gratifying. Don’t walk, run to see it.” – Andrea Torrence, St. Louis Theatre Snob

“Lizzie Slashes Its Way Across The New Line Stage With Powerful Performances. . .Now, four wonderful performances by four stunning ladies brings that story to life. . . Lizzie is more than a musical; it’s an event of epic proportions. These four women simply hew their way through a rock-perfect score and strike fear, terror and a bit of humor through the audience. This one is a no-brainer – you must see it and savor it.” – Steve Allen, St. Louis Stage Door 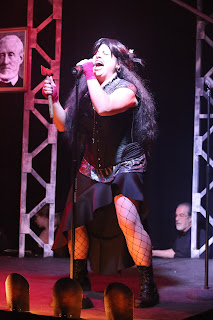 “A narrative of gory murder, burlesque costuming, and musings on gender and class are not all that Lizzie provides its audience, however. Despite or (depending on how much you love the horror genre) perhaps because of, its thematic and narrative darkness, it is, above all, fun. Backed by a hard-rocking, talented band, the cast seem to have enjoyed themselves as much as the audience did. . . A punk musical that draws as much on horror movie tropes of family dynamics gone horribly wrong as it does on the Victorian news story that helped usher in our contemporary fascination with media accounts of domestic murder and the trials that follow, Lizzie may not appeal to everyone. It is unapologetically feminist in an all-but-academic way, and those who think feminism is still a dirty word might want to go elsewhere. But for the rest of us, Lizzie gives us 90 minutes of heart (and Heart), style, and high-energy, darkly funny (and sad and angry) entertainment just in time for Halloween.” – Rachel Lewis, The Scene Shop

“It works. It actually does. . . There actually is something rather Gothic, in the earlier sense of the word, about all this. Nevertheless, seeing it in visual contemporary Goth, is invigorating. Is the play historically accurate? Well, since we had no forensics teams then, there are few absolute answers. Authors Steven Cheslik-deMeyer, Tim Maner and Alan Stevens Hewitt do utilize several intriguing, yea, even titillating theories that have been floated over the years. . . Director Mike Dowdy-Windsor has done a superb job of casting.” – Ann Pollack, St. Louis Eats & Drinks

“That is a hard-rocking, badass dark comedy. . . I love rock operas. I love rock music. And clearly I am a fan of musicals. This show has everything that I could ever ask for. The cast, comprised of only four extremely talented actors, are so strong in their roles. Not only can they sing and act, obvious prerequisites for starring in a musical, but they can rock! At times I wasn’t sure if I was in a play, or a rock concert. And I loved every minute of it. Not rocking out to the show, and shaking the row of chairs I was seated in, was honestly one of the hardest things I’ve had to do at a theatrical performance.” – Kevin Brackett, ReviewSTL

“What’s given here is a concert of relationships, finely crafted, shockingly portrayed, and effectively humanized, played with energy, grit, and magnetism by the first-rate New Line cast. . .You think you know what you’re getting – the Lizzie Borden story with rock music – and that is what New Line presents, but there is a lot more to it than that simple premise describes. The format here is a particular strength in that it takes subject matter that’s been talked about and presented in many different ways before, and brings it to the audience in a way that at once sets it apart and makes it more accessible. This Lizzie is loud, but it’s also incisive. The story is old, but it’s also new. It’s a story that’s been told, but not in this way. It’s New Line at its bold, brash, thought-provoking best.” – Michelle Kenyon, Snoop’s Theatre Thoughts