Book and Lyrics by W.S. Gilbert and Scott Miller
Music by Arthur Sullivan and John Gerdes
Orchestrations by John Gerdes 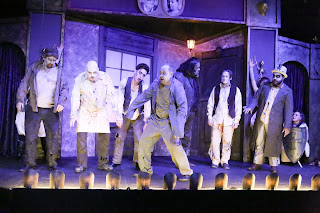 “The Zombies of Penzance may be the funniest show that New Line Theatre has ever mounted – and, among its original offerings, the one with the brightest future. . . Truly, you have never seen anything like this. That’s not hyperbole. It’s a fact.” – Judy Newmark, All The World’s a Stage

“New Line Theatre’s The Zombies of Penzance adds a dark tinge of horror to Gilbert and Sullivan’s classic operetta of jolly pirates raiding the upper class, and the result is both a nightmare and a delight – let’s call it a ‘delightmare.’ The songs are ripping, the performances are outstanding and the philosophical questions raised by the undead’s increasing dominance are chilling.” – Paul Friswold, The Riverfront Times

“It’s amazing just how effective the changes are, while still paying tribute to the classic text. And Arthur Sullivan’s fantastic music is left unharmed, while meshing perfectly with the updated lyrics. . . The Zombies of Penzance is absolutely hilarious right from the start. It’s the juxtaposition of zombies singing opera (and quite beautifully, I might add), and the subtle changes in dialogue which make it impossible not to crack a smile. The reworked plot is so absurd, but in the best way possible. Because of how the adaptation is handled with such care, the show is able to tell a just as entertaining and compelling story as the original. And I can honestly say I enjoyed it even more. . . New Line Theatre has chosen the perfect musical for the Halloween season, after carefully incubating it with love for several years until it was ready to make its debut. The Zombies of Penzance will change the way you think about the music and characters forever, as its updated message of female empowerment and inclusivity is undeniably relevant today. The show is so much fun, and there is much to be appreciated by both fans of Gilbert and Sullivan’s original work and newcomers to this fresh new story.” – Kevin Brackett, ReviewSTL

“We are swept away in a wonderful whirlwind of apocalyptic delight that is both fresh and familiar. . . With smart dialogue, clever lyrics, and rapid-fire jabs at conservative Christianity, I dare you to keep up with the pace here. This show is wholly entertaining starting with the first overture notes from the New Line Band and continuing until the very last hysterical twist as the lights go dim at the end. This wild, wonderful adaptation closely mimics the original, only this version is darker, edgier, weirder, and paradoxically funnier. Plus, there are dancing zombies! . . . It’s charming. It’s cheeky. It’s a super fun pre-Halloween show for those looking to laugh, or for anyone who enjoys The Pirates of Penzance. Trust me on this one. Gilbert and Sullivan would be amused.” – Tanya Seale, BroadwayWorld

“This new version of The Pirates of Penzance, titled The Zombies of Penzance, comes beautifully alive. . . All of a sudden it’s a modern show, but with an incredibly lush musical sound we scarcely deserve, here in this modern, profane age. . . So thank God (and George Romero) for The Zombies of Penzance. . . I really feared it was going to be a one-joke show. But it’s deliciously rich, and a great tribute to the original—skewering the zombie genre and subtly reviving the bygone art of light operatic romance in the bargain. . . it’s undeniably the perfect marriage of creative minds, across more than a century. And with all those brilliant choristers on stage, you just can’t kill it.” – Richard Green, TalkinBroadway 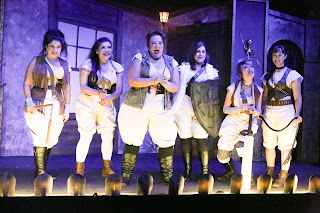 “If you’re in the mood for theater that will make you laugh while still delivering the pleasure of a high quality score, you won’t want to miss New Line Theatre’s latest production. Reverently irreverent and witty, Gilbert & Sullivan’s The Zombies of Penzance, or At Night Come the Flesh-Eaters is a rollicking good time of a zombie musical. . .New Line hits all the right notes with an abundance of sharp, insidious comedy and a touch of political commentary. The world premiere combines the efforts of W.S. Gilbert and Scott Miller on book and lyrics and Arthur Sullivan and John Gerdes on music, with orchestrations by Gerdes. The clever show is a fast-paced satire that’s at times adroitly bookish and at times total fanboy – of Gilbert and Sullivan… and Romero. George A. Romero that is, the acknowledged patriarch of the modern zombie canon. . . a delightfully fun, pointedly funny musical.” – Tina Farmer, KDHX

“It’s a rollicking musical filled with mirthful mayhem, just in time for Halloween. . . Miller and Dowdy-Windsor keep the show moving at a sprightly pace under their careful direction, pretty much guaranteeing a jolly good time for all. A pinch of Gilbert & Sullivan humor along with a sprinkling of Romero shivers blend well for a Halloween holiday treat.” – Mark Bretz, Ladue News

“Another triumph for New Line, a theater company with a disarming sense of fun. . . it’s a hilariously inspired joke, and just what theatergoers need in these often troubling times.” – Calvin Wilson, St. Louis Post-Dispatch

“If you’re looking for an uproarious way to spend a couple of hours, Gilbert & Sullivan’s The Zombies of Penzance or At Night Come the Flesh Eaters is a no-brainer!” – Jeff Ritter, Critical Blast

“Another example of the excellent casting and top-notch singing that’s come to be expected from New Line. It’s also a whole lot of fun to watch, but especially so if you like zombie stories, Gilbert and Sullivan, or both. . . In terms of humor and sheer musicality, it’s remarkable. Ultimately, though, this show is a witty, hilarious show that has a lot of fun with its concept and features a first-rate, enthusiastic cast. It’s not ‘traditional’ Gilbert and Sullivan, but that’s really the point. It’s another excellent, thought-provoking show from New Line.” – Michelle Kenyon, Snoop’s Theatre Thoughts

“Let the wackiness ensue with Miller’s smart book and quick-witted lyrics, using Gilbert’s template. Listen carefully for laugh-out-loud humor, utilizing contemporary snarkiness. . . These zombies might not terrify, after all, but they certainly provide a fun, frothy look in a lighter vein – at both vintage opera and the horror archetypes who proliferate this time of year. Barbara, they are coming, only armed with songs, dances and feelings. One can’t resist the pull of brainy and talented people who set out for a road not taken before.” – Lynn Venhaus, St. Louis Limelight 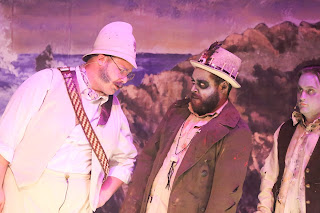 New Line Theatre has shocked the music and theatre worlds by discovering a controversial, long-lost first draft by the legendary British team of librettist W.S. Gilbert and composer Arthur Sullivan, who together wrote 14 comic operas from 1871 to 1896.

One of the team's best known works, The Pirates of Penzance, originally debuted in New York in 1879, and was revived to great success in the early 1980s with Kevin Kline, Linda Ronstadt, and Rex Smith. What we now know is that there was an earlier, stranger draft of the show, with most of the same characters but a somewhat different plot.

In Gilbert & Sullivan's never-before seen original draft, dated December 1878 and titled The Zombies of Penzance (with the unwieldy subtitle, At Night Come the Flesh Eaters), Major-General Stanley is a retired zombie hunter, who doesn't want his daughters marrying the dreaded Zombies of Penzance, for obvious reasons. According to documents found with the manuscripts, Gilbert and Sullivan finished work on The Zombies of Penzance in early 1879, but their producer Richard D’Oyly-Carte refused to produce it, calling it vulgar, impolitic, and unchristian, and in one particularly pointed letter, “an operatic abomination, an obscene foray into the darkest of the occult arts.” In a letter to his cousin, Gilbert expressed his deep disappointment, writing “I fear the living dead shall be the end of me yet.”

Until now, music scholars had been baffled by that reference.

After a battle that almost ended the partnership, the team reluctantly agreed to rewrite their show, and in December 1879, D'Oyly-Carte debuted the more conventional, revised show, The Pirates of Penzance. As he had agreed, Gilbert eliminated all references to zombism.

In 2013, New Line artistic director Scott Miller discovered the original manuscripts for The Zombies of Penzance in the second sub-basement of the Judson Memorial Church in New York, hidden beneath some moldy band parts from Rockabye Hamlet and Shogun the Musical, and Miller set about reconstructing the bizarre original show as its creators intended. Gilbert's living dead and their Zombie King now make their long-delayed world premiere. Miller has painstakingly reassembled these rediscovered materials into their original form, filling in the gaps with educated guesses based on other G&S shows and drafts. St. Louis composer and orchestrator John Gerdes has reconstructed Sullivan's music. Now, for the first time, audiences will be able to see and hear the comic, flesh-eating insanity Gilbert & Sullivan originally wrought.