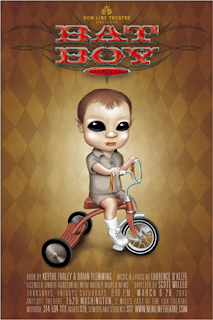 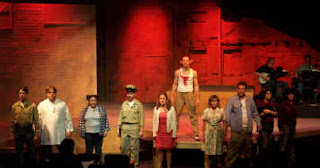 “So weird. So smart. So shocking. So entertaining. Bat Boy, a hit off-Broadway, has found a worthy roost at New Line Theatre, where artistic director Scott Miller has spent 12 years honing a taste for musicals with just those characteristics. . . this show is in a class by itself – and New Line’s confident production lets it stand on its own webbed feet.” – Judith Newmark, St. Louis Post-Dispatch

“Splendid fun. Todd Schaefer is dazzling in the title role, acting and singing and well, and dominating the stage. April Lindsey, Jason Cannon and Deborah Sharn stand out as his “family,” and the rest of the cast, in a wild variety of roles, costumes and genders, bring West Virginia to madcap life.” – Joe Pollack, KWMU-FM

“This production works on many levels thanks to the exuberant cast. Todd Schaefer is spectacular in the title role.” – Sheila Schultz, KDHX-FM

“One of the best musical theatre scores I’ve heard recently. Miller and New Line never do shows that waste either their time or ours.” – Bob Wilcox, West End Word 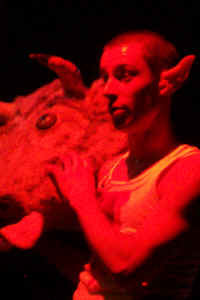 We knew we had something special when, one day in rehearsal a few weeks ago, we finished the finale and a couple of us had tears in our eyes. We had just run through this genuinely wacky show about a half-boy/half-bat and his quest for love and acceptance among the coal-miners-turned-inept-cattle-farmers of Hope Falls, West Virginia, a musical based on a Weekly World News story, of all things, and we were somehow deeply moved by it all.

But when I saw Bat Boy the first time in New York, I had the same experience. I walked out of the theatre wondering how, amidst all that craziness and bizarre comedy, the authors had gotten me to care about the bat boy. It was one of the funniest shows I had ever seen, and it was also deeply emotional. It was outrageous, sweet, satiric, gentle, smart, innocent, touching, hilarious, a little sad, adjectives that didn’t seem to go together, and yet somehow it formed a perfect evening of theatre. The rowdy satire of “Another Dead Cow” and the gentle kindness of “A Home for You” somehow co-existed beautifully in this strange world the creators had wrought.

I knew that night as I walked home that I had to get the rights to produce this show. It was everything New Line is about. It was about important social issues, it was smart, and it had one of the strongest scores I’d heard in years (which gets the credit for a lot of the emotional impact of the show), but more important than that was its brand of storytelling.

Bat Boy is all about imagination. It demands a great deal of its audience. It asks them to forego the high tech trivialities of most current Broadway shows. It asks them to directly participate in the experience of live theatre by believing in the characters and story without realistic sets and costumes, without special effects, without helicopters or chandeliers, without a budget equal to that of a small town.

In Act II, the King of the Forest sings, “Children, welcome home, to where we all began,” words that not only invite the young lovers back to the roots of humanity, but they also invite the audience back to the roots of theatre, back to Grotwoski’s “poor theatre,” where it’s all about the storytelling, about the one-of-a-kind experience of live actors and a live audience sharing a story. Nothing else is necessary.

Maybe Bat Boy's greatest strength is that though it’s about important issues, it never bludgeons the audience with them (though, as you may know from Anyone Can Whistle, we’re not entirely opposed to bludgeoning now and then). I’ve often said I believe theatre to be potentially one of the most powerful forces for change in America, because it can address issues without an audience noticing. It can get people thinking without them realizing what’s happening. It’s sneaky that way. Kinda like a hopped-up kid creeping up on a defenseless little bat boy in a cave. But I digress…

We hope you enjoy getting to know the bat boy tonight as much as we have enjoyed it. He might have fangs, big pointy ears, and an unfortunate taste for fresh blood, but the world could use a few more like him.
0 comments