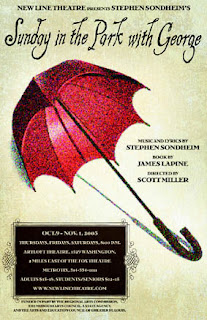 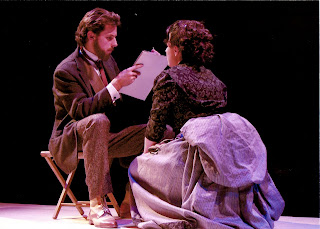 “New Line Theatre’s invigorating and richly rewarding production... is a strong, stirring, delicately textured work of art on its own in this first-rate production.” – Mark Bretz, KDHX-FM

“The ArtLoft has the potential to change with every show. For New Line Theatre’s current production there, Sunday in the Park with George, director Scott Miller and set designer Justin Barisonek exploit that potential with elegance and wit. . . Rarely staged, Sunday is an odd work. Its proportions are unfamiliar; it’s slower and more cerebral than most musicals, and its century-long story arc demands a little patience. But with their apt design and distinctive staging, Miller and Barisonek set a welcoming pace, one that’s a pleasure to keep.” – Judy Newmark, St. Louis Post-Dispatch

“Stephen Sondheim composed his gorgeous score from a palette containing colors of astonishing beauty and texture... New Line’s four-piece band does a Herculean job of conveying the inherent artfulness in this lush score.... Todd Schaefer emanates assurance and authority. In Act II, as Seurat’s great-grandson, he even finds the evening’s underlying conscience.” – The Riverfront Times 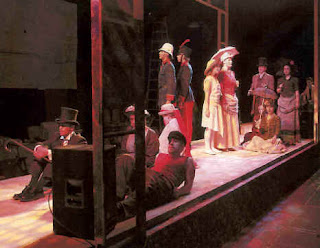 In 1994, New Line produced Pippin, a show which had a cast of about twenty on Broadway, but we did it with a cast of nine. In 1996, we did Sweeney Todd, a show which had a cast of thirty on Broadway, but we only used fifteen. We did Camelot in 1999, a show which originally had a cast of about sixty, and we did it with a cast of thirteen. We stripped all three shows of their original spectacle, their fancy sets and costumes, all the distractions that took the focus away from the actors, their characters, and the emotional content of the story. After all, Camelot isn’t about costume parades; it’s about a tragic romantic triangle, overflowing with profound emotion. Pippin isn’t about flashy sets and choreography; it’s about a generation of young people growing up without direction, role models, or hope for the future. It’s about a young man contemplating suicide. Sweeney isn’t about giant sets; Sondheim always said he intended it to be a small chamber musical, with actors popping up from behind audience members. So that’s how we did it.

Why re-imagine these shows? Why stray so far from the original concepts? Because the original productions aren’t always the best way to do a show. In each case, I have believed that the show we were working on was underestimated, that people saw flaws in the works that were more a product of how they were produced, not how they were written. And now, why take such a different approach to Sunday in the Park with George? Not just for the sake of being contrary, I promise. As with the others, Sunday is not about stage effects or about how much the actors can look like a famous painting. It’s about the nature of genius, about the hard work that human relationships require, about the way artists see the world and how they take little, ordinary moments in life and turn them into art.

In this show, the painter George Seurat takes small moments of real life and real people and he arranges them and focuses them, finds the beauty and nobility and order in them, and he molds them into a great painting. These lives may seem like they don’t matter, but they do; they are the stuff from which transcendent art is made. Likewise, Stephen Sondheim and James Lapine have taken those same small, ordinary moments and molded them into a work of musical theatre that approaches genius, that won a Pulitzer Prize for drama, that touches audiences in unexpectedly profound ways. Seurat and Sondheim both celebrate the small moments. We are all works of art, they seem to be saying. Our lives are worth preserving forever. But it takes a genius to see the radiance and grandeur in our little lives.

We hope that by stripping away the baggage of Sunday in the Park, you’ll be able to focus more on these characters and their relationships, their emotions and hang-ups, their love and pain, and on this glorious music and these amazing lyrics, to really get inside this world and inside the mind of a genius.