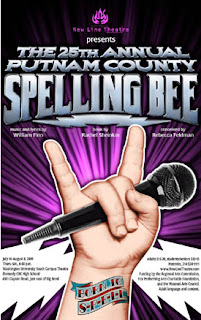 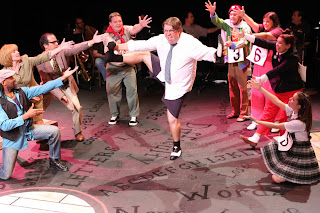 “An over the top delight. New Line Theatre’s current production is a perfectly cast show filled with moments of high hilarity. . . I can’t remember when I’ve laughed so hard and so long at a show. New Line’s presentation of The 25th Annual Putnam County Spelling Bee is priceless entertainment.” – Chris Gibson, BroadwayWorld.com

“All of the stress and self-doubt of puberty are relived in delightfully meticulous and humorous detail in director Scott Miller’s uproariously magnificent production of this surprise Broadway hit from 2005. Miller has assembled a smart and energetic cast who throw themselves hilariously into their squirming roles, while also managing some poignant moments as well. Indeed, this version plays even better than did the touring show at The Fox a year ago, as Spelling Bee is a small musical that is most effective in a cozier venue. . . New Line’s Spelling Bee is what e-n-t-e-r-t-a-i-n-m-e-n-t is all about and a positive life lesson to boot.” – Mark Bretz, Ladue News

“Life may be pandemonium, as the lyrics goes, but Miller’s direction is quite disciplined, and his cast is top-notch.” – Peter Filichia, TheatreMania.com

“This Spelling Bee radiates the goofy, familiar charm of a sketch comedy show that you try not to miss. You know the players; the fun lies in seeing what they’ll do this time. . . It’s just a sweet, imaginative look at pressure and how we badly we sometimes handle it. The adults laughing in the audience may have more finesse than the kids portrayed on stage – but we wouldn’t laugh if we didn’t know exactly how they feel.” – Judith Newmark, St. Louis Post-Dispatch

“[Bookwriter] Rachel Sheinkin and [composer] William Finn celebrate the pariah in devastatingly funny songs. Scott Miller’s production is exceptionally fine, exploiting the large laughs of the precociously confident William Barfée (Nicholas Kelly), a mucously enhanced young man who lauds his magic spelling foot in a Busby Berkeley-esque fantasia (courtesy of choreographer Robin Michelle Berger). Miller just as deftly develops the quieter moments, such as parolee-cum-rules enforcer Mitch Mahoney (John Rhine), who sings of wanting to beat the children to teach them real pain, but instead hugs and comforts them. Because that’s all anyone can do: Say ‘good job,’ and hope the vulnerable are resilient enough to take the punches when they come.” – Paul Friswold, The Riverfront Times

“A charming evening of song, wit and wisdom by New Line Theatre . . . The delightful production is more effective on the smaller stage, with its more intimate atmosphere, than it was when a touring company played the Fox a few years ago. Scott Miller’s direction is crisp and on the mark . . . Spelling Bee is a great deal of fun.” – Joe Pollack, St. Louis Eats and Drinks

“Sabotage, the casting off of perfection, and the tender beginnings of love stir the emotional pot of act two. In the end, only one speller emerges victorious, but everyone who came to see the play also wins, in terms of money and time well spent for a night’s entertainment.” – Nancy Larson, St. Louis Woman 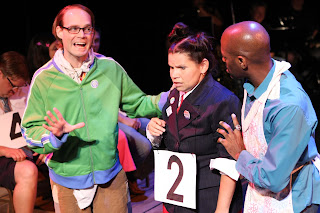 Spelling Bee is an unusual show. Even for us. It’s a musical unlike anything you’ve seen before. And it wasn’t created the way most musicals are created.

It all started in 2002 with director Rebecca Feldman and her New York-based improvisational group, The Farm, who created a comedy called C-R-E-P-U-S-C-U-L-E at the Present Company Theatorium in New York. Playwright Wendy Wasserstein made the trek to the Lower East Side theatre, in a rat-infested former chop shop, to see her weekend nanny perform in this sketch comedy show about a spelling bee. C-R-E-P-U-S-C-U-L-E was the brainchild of Feldman, who had never lived down misspelling bruise as bruze in a childhood bee.

Wasserstein loved the show and saw something in it for her friend, composer William Finn (Falsettos, A New Brain, Romance in Hard Times, Muscle), who did not bother to actually go see the show but watched a tape of it on his bed, falling asleep in the middle. But he still loved it. He was drawn to the concept of a spelling bee as a metaphor for human experience. “Sometimes you get the easy word, and sometimes you don't,” says the composer. He puts it best in one of his lyrics for the show: “Life is random and unfair.” With Finn now contributing the soul of the show, the central theme emerged: America’s obsession with Winning – one of the main drivers of the current Wall Street meltdown.

In 2004, now with a revised script by Finn’s former student Rachel Sheinkin, the show was workshopped and then produced by the Barrington Stage Company in Sheffield, Massachusetts. In February 2005, it opened off Broadway, and in May transferred uptown to Broadway, where it ran 1,186 performances, closing in 2008. Spelling Bee was honored with six Tony nominations and won two of them. The show also won three Drama Desk Awards, two Lucille Lortel Awards, and two Theatre World Awards.

Finn says about these characters, “These kids who feel like freaks when they arrive at the bee find others who are just like them, and they realize they’re not going to be alone for the rest of their lives.” He says that whenever he speaks to teenagers, he tells them they will be appreciated as adults for the very qualities that render them nerds in high school. He goes on, “Inevitably the cutest girl or the handsomest guy raises their hand and says, ‘But I’m happy here.’ And I say, ‘Well, I’m not really talking to you. I’m addressing everyone else’.”

Tonight we salute all the wounds, past, present, and future, that make us the neurotic, needy, crazy, beautiful people we all are.