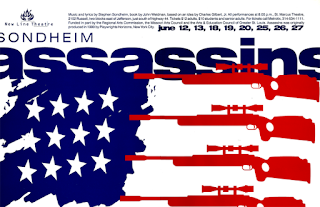 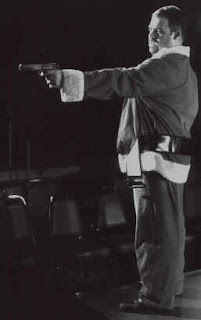 “For the most part, 1998 was full of supreme performances in solid productions. Looking back, only New Line Theatre’s production of the Stephen Sondheim musical Assassins was, as a whole, a wild and gratifying surprise. Here, a talented group of locals inhabited Sondheim’s creepy vision of what lives under America’s political rocks. It was intense, entertaining, and terrifically ‘out there.’” – Mike Isaacson, “1998: The Year in Theater,” The Riverfront Times

“There is a rare, exhilarating thrill to be had for the next two weeks in St. Louis. New Line Theatre’s frequently thrilling Assassins sets a new standard for the St. Marcus Theatre, and it easily ranks as one of the finest works ever produced there. The evening is funny, disciplined, scary, intimate and strangely credible. . . The astounding intensity of the cast, and the admirable fact that they never once step ‘outside’ the material or comment on it, but fully dwell in this strange, murky netherworld, must be credited to the co-direction of Scott Miller and Alison Helmer.” – Mike Isaacson, The Riverfront Times

DIRECTOR’S NOTES
Many Americans think the men who declare war are strong.

We applauded George Bush for sending troops to the Persian Gulf. And we hailed the men who actually carried out the killing as heroes and patriots. Many Americans also not only accept but actually defend the act of killing criminals.

But we call John Wilkes Booth a traitor and a madman.

We now know that Abraham Lincoln desecrated the very foundation of our American government in many ways. It is historical fact that he took powers that were not his to take. He ignored – some would say overthrew – the careful construction of the three branches of government designed to hold each other in check, the structure our Founding Fathers so carefully created to avoid tyranny and corruption. He declared war without the approval of Congress. He threw innocent people into jail in both the North and the South without charges and without trials. Many people hated him, in both the North and the South. They believed he was destroying our country.

And yet we think Booth was crazy for thinking he’d be called a hero for killing Lincoln.
Richard Nixon was not unlike Lincoln in some ways. Nixon also trampled on the Constitution. He also took on powers that were not his. He broke the law. He betrayed America. Some would argue that America has never been the same since.

And we think Sam Byck was crazy because he wanted to kill him.

If Lincoln or Nixon had committed these atrocities, these crimes against their nation in any other country on earth, we would call them dictators, despots, tyrants. Many Americans would call for their destruction, their overthrow, maybe even their assassination.

But because Lincoln was murdered, he is remembered as a hero, and more ironically, as a great president. And we make movies about Nixon.

We’re not making any statements here about slavery, the Civil War, or Watergate. We’re just suggesting that the issues you’ll encounter tonight are not as black and white as you might think. The world is a more complicated place than our stories, textbooks, newspapers, movies, and CNN Headline News would have us believe. (Check out a book called American Assassins: The Darker Side of Politics by James W. Clarke for more on that topic.)

These assassins are not insane. (Okay, except for Guiteau.) The accusations leveled by Booth, Byck, Czolgosz and others are true. We must listen to them, if for no other reason than the simple fact that if we do not learn from history, we are doomed to repeat it.

I played Sam Byck and one of the scenes calls for Byck to be driving a car and eating a hamburger. Because of his anger, he throws the burger out the car window. When we did the performance, it was done in the round, so when I threw out the burger, I threw it out into the audience. I had to make sure that I cleared the heads of the audience. Well, let’s just say, this was not always easy. The first night I did it in rehearsal, I hit one of the cast members in the head! As time went on, I got more proficient and things went off without a hitch until the second week of performances. Because we had sold out shows, Scott decided to add some extra seats at the last minute and added them along the wall at which I usually threw the burger. I didn't know until the show started that he had added the seats. The whole time before the scene, I was thinking about where I was going to throw the burger without hitting anyone. I thought I had found a place; however, people decided to move their seats during the performance. I did the scene and threw the burger and didn't think anymore about it. As we came out after the show, a person came up to me and said, “Hey, here is your hamburger. You threw it right in my lap!”
-- Patrick Kerwin, “Sam Byck”

This is such an awesome show. I was lucky enough to be a part of it both times New Line performed this extraordinary work of Sondheim’s, as Zangara the first time and as the Balladeer the second time. I thought doing it in the round really added to the intimacy and in-your-face nature of the show and helped us achieve something that I believe Sondheim would have been proud of. These were some highlights for me: the duet between Kirsten Kennedy and Colin DeVaughan on “Unworthy of Your Love.” It was beautiful each and every night. Kevin Collier's Czolgosz. Kevin's performance really coooooooked and he has since secured his place in my mind as the epitome of a scary, angry Russian man. (Ivan Drago eat your heart out!) Gary Cox as Zangara. Gary makes more faces on stage than anyone I know. He is so much fun to watch if only to see what his face is going to do!
– Dan Sattel, “Balladeer”

I played Sara Jane Moore, the part that will live in infamy. I loved doing that role, though there is one particular scene that is an actor's nightmare. It includes eating, drinking, smoking, guns and voluminous props – all while talking of course – and one night the seat split open on my real 1970s pants when I sat down. Luckily I had on a long 70s vest which covered the split – which was lucky because the theatre was so hot that none of us wore underwear. Also, the show’s publicity picture of me eating Kentucky Fried Chicken and drinking the Tab soda was literally splattered in every newspaper in town for weeks until everyone was sick of looking at it! However, every place I go, even now, someone will come up and say, “Wow, you were so good in Assassins!” – sometimes people I don't even know. Occasionally, our esteemed director, Scott Miller , is present when this happens, and he says, “Gee, that's great, but there were other people in the show too!”
– Cindy Duggan, “Sara Jane Moore”

My character, Sam Byck, has two monologues during the show, one of them while sitting on a park bench, having lunch and making tape recordings to send to important people so they can hear his message. While I know that many people tell stories of people talking in the audience, I got my first real taste of it during the first week of performances. There was an older gentleman who I think was a bit hard of hearing who thought that my character was really funny. However, he also had a hard time hearing some of what I was saying, since we were doing the show in the round and at times I was not looking at him while doing my lines. During the whole monologue, I could hear the guy making very loud statements like “That guy is really funny,” “He is right about that,” and “Oh, my, that is good.” However, when he couldn't hear me, he kept asking his wife “What did he say?” Eventually, because he was talking so loud, people started to laugh at him and were whispering about The Loud Guy. I kept going and didn't forget too many of my lines, but I will never forget trying to compete with the audience member for attention.
-- Patrick Kerwin, “Sam Byck”

My favorite moment in the show was one I created. It may be the moment I’m most proud of in any show I’ve done. The second to last scene finds all the assassins from all times coming together in the Texas Book Depository to convince Oswald to shoot Kennedy – truly chilling stuff. Then when Oswald pulls the trigger, there’s an instrumental segue in the style of Aaron Copland’s music, and it segues directly into the finale, “Everybody’s Got the Right to Be Happy.” My addition was that during the instrumental segue, I sent each assassin out into the audience. I told them each to pick two or three people and tell those people – quietly, privately, intimately – why they had to kill the president. I told the actors they could use lines from the show or make things up, but to really try to convince the audience. I wanted everyone in the audience to be experiencing something different at this moment, hearing only one or two actors, wondering what the others were saying. Every night, the audience was mesmerized, their eyes glued to the assassin nearest them, hanging on every word. And every night, the last one to finish was Tim Schall as Guiteau, one of the truly insane assassins. And the last words that rang in the air before the finale were Guiteau quietly hissing “I did it for you! I did it for you!” It was the most disturbing moment I’ve ever created in the theatre.
-- Scott Miller, director