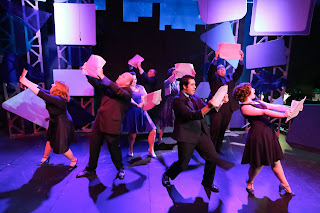 “New Line Theatre sizzles with Sweet Smell of Success. . . The show casts unflattering shadows on the underside of fame, but the musical is spectacular theater and visually gorgeous. The story is compelling and captivating, the performances are uniformly strong and harmonically on point, and attention to detail adds the finishing touch on New Line Theatre's entertaining production.” – Tina Farmer, KDHX

“There are so many things to love about New Line Theatre's latest production, Sweet Smell of Success, that this review is certain to be filled with superlatives. . . Superior performances, a great band, and sharp direction make this show a must-see. . . a joy to behold. It's smartly conceived and executed, and completely engrossing. What's more, it's totally relevant to events we see transpire in the world of journalism today. ” – Chris Gibson, BroadwayWorld

“Sweet Smell of Success is a string of firecrackers that detonates at dangerously close range. It's dark, it's dirty and it somehow tricks you into believing in the petty dreams of an ambitious scumbag, at least for a little while. And the best part? While those little explosions are still ringing in your ears, you realize exactly how you were duped — and your own complicity in the game Sidney and J.J. play with other people's lives.” – Paul Friswold, Riverfront Times

“In a sense, the stage has never been so empty. It's fully peopled, but it's a late night world of smirking nightclub owners and press agents and would-be ingénues, all starved for success, leaving humanity in short supply. It's the opposite of Our Town, where only the set pieces are meant to look fake. But don't worry, there's also a beautiful love story growing up between the cracks, like some defiant orchid. Romance, in fact, gains synergy under the direction of Scott Miller and Mike Dowdy-Windsor: the dominant, grueling cynicism of Sweet Smell of Success only makes the romantic subplot more compelling. . . It's a show that's full of kind-hearted people showing their tough edge, and tough-hearted people striving to show a kindly façade. The trick, as in real life, is in telling the difference between the two.” – Richard Green, TalkinBroadway

“New Line Theatre's Sweet Smell of Success Is disturbingly brilliant . . I’ve covered New Line’s show for a long time, and co-directors Scott Miller and Mike Dowdy-Windsor do two things exceptionally well: find great material that may be better suited for their black box theatre at The Marcelle than the glitzy, over-produced attempts on Broadway, and cast some the best and brightest up and coming actors in the St. Louis area to perform it. . . When the acting in any show is so good you forget you’re merely observing the show and aren’t actually in it, they’ve got you. The entire cast of Sweet Smell of Success got me big time. . . tremendously entertaining. The plot is intricate without being difficult to follow, the songs are memorable, and the acting is top notch.” – Jeff Ritter, Critical Blast

“A smart, intriguing, and endlessly entertaining story . . . Once again, New Line has produced a show full of incredible songs that I’ve never heard of – yet instantly fell in love with. Hats off to the New Line Band, directed by Jeffrey Carter, who beautifully transports the audience to ’50s New York with their endless talent. . . Directors Scott Miller and Mike Dowdy-Windsor bring home another winner with this twisted tale of success, and the rise and fall that inevitably comes with it. The music is fantastic, as the intriguing story pulls you in and doesn’t let go until the very end. The entire cast – from the principals to everyone in the ensemble – is extremely talented, and does a terrific job in bringing this tale to life.” – Kevin Brackett, Review STL 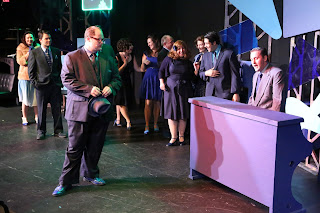 “It’s a blue world at New Line Theatre: kind of sad, kind of dirty, kind of blue in Marvin Hamlisch’s jazzy score for Sweet Smell of Success. . . That mood is established from the get-go by music director Jeffrey Richard Carter and the New Line Band. They sound as if they’re appearing at the Marcelle via time travel, on loan from a midcentury hot spot in Greenwich Village.. . .its smoky atmosphere thrives at New Line.” – Judith Newmark, St. Louis Post-Dispatch

“The musical version of Sweet Smell of Success opened big on Broadway. . . Scott Miller, the founder of New Line Theatre, saw it, loved it – and realized it didn’t belong in a big Broadway house. He was right. Much of it takes place in smoky nightclubs of the 1950’s and in the equally smoky offices of press agents. Intimacy is good for the music, it’s good for the actors and it’s good for its effect. The only thing New Line’s current production lacks in reproducing that intimacy is actual cigarette smoke. . . Jeffrey Carter and the New Line band take good care of the score and the sound from Elli Castonguary is nearly perfectly balanced. Taylor Pietz’ choreography – and this is a dance-heavy version of the show – is fun, especially with the chorus, which has some folks who would have been right at home in Guys and Dolls. They’re a delight. Much credit to Miller and co-director Mike Dowdy-Windsor for this show, which manages to be a romp despite its very serious story.” – Ann Pollack, St. Louis Eats and Drinks

“This is the kind of show that New Line does especially well–a show that might have been too ‘small’ in a sense for Broadway. It’s the kind of show where an intimate presentation in a venue like New Line’s Marcelle Theatre can be ideal, to scale this story down to its most important elements–the characters, the raw emotions, and the key concepts at play in this seedy, sultry, and sometimes downright scary morality tale that focuses on the down side of the quest for fame. . . This is a challenging, incisive story with an incisive message, richly drawn characters, and even more richly drawn settings. It’s an homage to Film Noir, tied to its time in one way, but surprisingly timeless in another, since the modes of communication and the names may change over the years, but human nature hasn’t changed, and neither have the temptations that come with the thirst for knowledge, influence, and especially power and control. Sweet Smell of Success isn’t always sweet, but at New Line and with this cast and creative team, it’s certainly a success.” – Michelle Kenyon, Snoop’s Theatre Thoughts

“New Line Theatre captures the rhythm of Marvin Hamlisch’s jazz/rock musical score as well as the biting social satire about the dark side of the 1950s in John Guare’s book in its current production of Sweet Smell of Success. . . a well-wrought execution of a fascinating look at what some people remember as the ‘good old days’.” – Mark Bretz, Ladue News

“It's a must-see this summer!” – Lynn Venhaus, OnStL 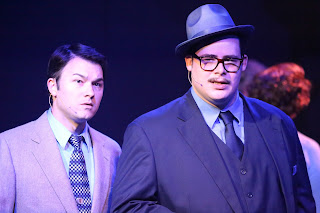 I saw Sweet Smell of Success on Broadway in 2002, and I immediately realized this show doesn’t play by the same rules as most other musicals.

First, it's a very intimate story about four people with incredibly volatile, complicated relationships, and I think that doing the show in our small blackbox will be so much more intimate and more intense than in a huge Broadway theatre. Here, there’s no distance from these ugly, ferocious, fragile emotions, no safety.

Second, this is almost a jazz opera. Like Sweeney Todd, the music only stops periodically, to underline certain moments, to punctuate the action. But this kind of 1950s club jazz shouldn’t be a big, heavy, orchestral thing; it's an up-close, sweaty, sexy, subtle thing. A full Broadway orchestra, a big stage, and a big chorus, took the urban and the desperate out of the story. Our band will offer up the kind of sound you'd really hear in a jazz club in the 50s.

The reviews of the Broadway production weren't great, but I think they really missed the point. This isn't a conventional musical, if there even is such a thing anymore, and that's how they judged it. Like almost every show we produce at New Line, Sweet Smell is one of a kind. But like a few other shows we've done in recent seasons, it’s also a moral thriller. It will leave you breathless, and the Act I finale is a killer cliffhanger! More than any other show I've ever worked on, this is a virtuosic translation to the musical stage of the devices, tone, and atmosphere of film noir.

I'm reading some great books about that time and place, and about Walter Winchell, the real life Broadway columnist that J.J. Hunsecker is based on. What surprised me the most – and it made me understand better the high stakes in our story – was that sixty million Americans across the country read Winchell's nasty, petty gossip column every morning over their coffee. Sixty Million People. That's close to half of all the men, women, and children in America at the time.

J.J. has power only because sixty million people want their morning dirt. Like Chicago, Sweet Smell lays the responsibility for this nightmare world right at our feet. We are to blame for our own mess.

In the age of Fox News, Breitbart, social media, and fake news, this show may be even more timely now than it was in 2002. We can never forget that information is power – and power corrupts.