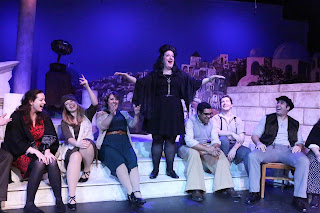 “Filled with passion and genuine exuberance, Zorba is the most beautifully hopeful tragedy I've seen in quite some time. The score and dancing are evocative, drenched with the sounds of Greek folk music. The lyrics are filled with exposition and storytelling reminiscent of the classics. The musical tackles the story of humanity as told through the eyes of an aging man determined to squeeze every last ounce from his own life. . . Thankfully, New Line Theatre has produced a deeply satisfying and effective show that resonates with hope. Zorba is a compelling story. The performances are sharply executed and endearing, and, though the ending is sad, it is filled with joy and gratitude.” – Tina Farmer, KDHX

“New Line Theatre's production is a real revelation, because even though this show received its fair share of award nominations, it's really not revived that often. Perhaps it's the darker shades that pervade the show that turn some people off, but then life isn't always sunshine and roses, so I like that that those elements are present. This kind of presentation is something that New Line does better than anyone else, and that's to revive a neglected or forgotten show for a new audience to appreciate, and their track record is impeccable in this regard. This show is a genuine must see. . . Directors Scott Miller and Mike Dowdy-Windsor find the heart and humor that define this piece, and they have their cast deftly bring it to life for another generation to enjoy. . . Don't miss New Line Theatre's Zorba! It's not only tuneful, but it provides food for thought. A nice combination.” – Chris Gibson, BroadwayWorld

“For nearly all of New Line Theatre's existence, Scott Miller has brought a piercing, keen intellectual meaning to his shows; and now in the last couple of years there have been added layers of warmth and kindness and heart, thanks to this extremely knowledgeable director/producer/author, now working in tandem with co-director Mike Dowdy-Windsor. Plus, here, some pretty over-qualified actors on stage, and the songs of Kander & Ebb, from 1968, right after their blockbuster Cabaret.” – Richard Green, TalkinBroadway

“A lesser known musical by lyricist Fred Ebb and composer John Kander, Zorba demonstrates the duo’s remarkable talent for creating intriguing and intoxicating musical stories. Directors Scott Miller and Mike Dowdy-Windsor take this rarely performed work and mine its rich potential in a highly entertaining presentation by their energized cast in the current New Line Theatre production. . . The production’s success is due in no small part to the exhilarating musical accompaniment of conductor/pianist Sarah Nelson and her band. . . Zorba the musical will lift your spirits with its wisdom and its zest and make you appreciate what you have all the more.” – Mark Bretz, Ladue News

“The show is directed by Scott Miller and Mike Dowdy-Windsor, a winning combination that started a couple of seasons ago. . . Their work on this production is another home run for New Line, packed full of great choreography and stage direction. . . Zorba is a musical that you may not yet know, but one that you will never forget. The songs are brilliantly crafted, telling a story of an unlikely friendship and the ups and downs that come with life. There is a significant lesson behind the catchy songs and wonderful performances that should not be ignored. Life is both good and bad, and you have to embrace everything that it entails to fully appreciate it. The show does an incredible job of teaching this lesson, and is non-stop fun at the same time.” – Kevin Brackett, ReviewSTL

“New Line Theatre’s newest production, Zorba, is a perfect example of the unpredictability of the one commodity that everyone holds most precious. . . Kent Coffel showed once again why he’s one of the best local actors in the St. Louis area. . . he can grab the attention of an audience in so many ways: booming voice, fantastic facial expressions, and deep characterization. . . His Zorba feels completely realized, more than just an actor’s notion of who the character is. To what extent he’s traversed the globe, how many unique adventures he’s had throughout his life, I couldn’t say. Kent’s gift as an actor is making you forget the actor completely and only see, in this case, Zorba. Every actor strives for that but not everyone achieves it. I tip my hat to Mr. Coffel on a job most beautifully done. . . I also tip my hat to the always sensational New Line Band....” – Jeff Ritter, Critical Blast 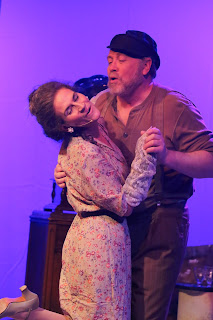 “Thankfully, New Line Theatre's current production of this rarely produced classic is a lived-in marvel of beauty and honesty. And it has a lot of bouzouki, which is always nice (the stringed Greek instrument is criminally underused in musicals). Much of the credit should be heaped upon the shoulders of Kent Coffel, who plays Zorba as an aged rake who loves sharing an instructive story almost as much as he enjoys pursuing women and breaking into dance. . . Zorba is a show that leads you into deep waters.” – Paul Friswold, The Riverfront Times

“New Line Theatre has given us a solid production with Kent Coffel in the title role and a solid supporting cast. Mr. Coffel has the zest and charisma needed for such an overpowering personality. He unabashedly swaggers into every situation, woos the women as if he knows they can’t resist him and handles the delightful music with a singing voice that matches the confidence of the character. . . A wonderful supporting cast who double up some pivotal roles are remarkable as well. Scott Miller and Mike Dowdy-Windsor co-directed and they bring out the unusual story line and odd mix of characters full of life -- and even a few deaths -- with satisfying results...” – Steve Allen, Stage Door St. Louis

“While John Kander and Fred Ebb’s celebrated masterpiece Cabaret plays the Fox Theatre, New Line Theatre offers up a gemlike production of one of the team’s later, lesser-known musicals, Zorba. New Line has previously staged Cabaret, as well as Kander and Ebb’s Chicago and Kiss of the Spider Woman — all three with flair and intelligence. But with this zesty new production, New Line asserts a particular advantage that a small, idiosyncratic theater can bring to its community. It can mount the shows it chooses, shows we don’t see anyplace else. In this case, the gamble really pays off.” – Judith Newmark, St. Louis Post-Dispatch

“It’s a good show for the intimate confines of the Marcelle Theater, full of storytelling and vivid characters. . . New Line always seems to cast first on the basis of musical talent and other considerations after that, and here’s another place where it’s rewarded, the chorus sounding really great. Directors Scott Miller and Mike Dowdy-Windsor have carried this off well, and Rob Lippert’s set and lighting work well. . . Despite the funny lines, this is ultimately a serious, thoughtful show and it’s given a good showcase here.” – Ann Pollack, St. Louis Eats and Drinks

“After seeing Zorba at New Line Theatre last week, I decided to quit my job. Instead of work, I would go wherever my feet would take me, making my living with odd jobs, beholden to no one. By the time I got home, I had sobered up (or chickened out). But that’s the kind of impact Zorba can have. From the early assertion that 'life is what you do while you’re waiting to die,' through the penultimate song 'I Am Free,' Zorba sells a vision of life that’s not necessarily new (live every moment to the fullest and like it’s your last), but is extremely seductive. . . ” – Rosalind Early, St. Louis Magazine

“Sarah Nelson’s music direction is impressive, as is the band’s impeccable work. . .Co-directors Scott Miller and Mike Dowdy-Windsor emphasize the show’s ‘live in the moment’ philosophy, which is always good to be reminded of, and this production is all about living out loud. . . Zorba has the kind of message that makes us appreciate life as it is.” – Lynn Venhaus, Belleville News-Democrat

“A celebration of the beauty and messiness of life itself. At New Line, this show is brought to the stage with energy, intelligence, and an especially strong cast in the leading roles. It’s definitely a show worth seeing.” – Michelle Kenyon, Snoop’s Theatre Thoughts 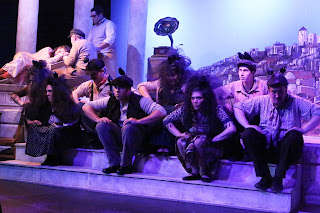 Have you ever pondered the Meaning of Life? If not, you need to smoke some pot. If you have, we've got a musical just for you.

Zorba opens in a bouzouki parlor in Greece where a group has gathered to drink and tell stories. They tell us the story of Zorba and his philosophy of living life to the fullest.

So what is this brilliant, rarely produced show really all about?

On the surface, Zorba is a wild mashup of sex comedy, romantic tragedy, social commentary, and philosophical debate. All in one. Along with some wonderful Kander & Ebb songs. Zorba is very much like the other Kander & Ebb shows Cabaret and Chicago, except Zorba really isn't cynical, while the other two are almost entirely cynical.

Years ago, I was listening to the Zorba cast album and had a huge revelation. I recognized suddenly the subtle, stunning brilliance of calling the opening song “Life Is.”

It's not an unfinished phrase, which is what it seems on the surface. After all, the title is not “Life Is...” No, the point of the title – and the song and the entire show – is that Life just is. Or in my own lingo, “It is what it is.” No use trying to change it or rage against it. Life is good and bad and beautiful and ugly and tender and rough and everything else; and the only way to fully love life is to embrace all of it. The only way to be truly happy is to love all of life. Even when people leave us, even when they die.

That's the secret to happiness that Zorba knows and Nikos must learn.

Lots of people have told me they think Zorba is depressing, but they're missing the point of the show, and they're not listening to the opening number. It’s not depressing; it's just aware. When Anthony Quinn revived and rewrote the show in the 1980s, they changed the Leader's first line to, “Life is what you do till the moment you die.” A kinder, gentler Zorba. But Zorba isn't about the fear of making the audience sad: it's about the embrace of the adventure of living. Tonight you’ll hear the real lyric.

I had another revelation about this same song recently in rehearsal. What I realized is that “Life Is” is a debate, an argument; and so is the rest of the show. Our story, though so funny and emotional on the surface, is as much a philosophical debate as it is a romantic comedy-drama. Throughout the entire story, Zorba is teaching Nikos just as Socrates once taught Plato, through argument, through story, through parable.

Don't get me wrong, Zorba tells a straight-forward, linear story, but as with most Kander & Ebb shows, there's a whole lot more going on. Zorba achieves what Bob Fosse once called “Poetry, Popcorn, and Politics,” or in other words, artistic beauty, pure fun, and important issues, all in one.

It's an extraordinary show, as emotional and cerebral as it is rowdy and vulgar, and populated by a bunch of wonderful characters that you're really not going to want to leave at the end of the story. We’re very glad we get to share it all with you tonight.