Conceived by and Original Book by Jeffy Whitty
Adapted by James Magruder
Music and Lyrics by The Go-Go's
Based on the 16th-century novel The Countess of Pembroke's Arcadia by Sir Philip Sidneys
March 5-14, 2020 (closed early)
Marcelle Theater
Show Webpage
Production Photos 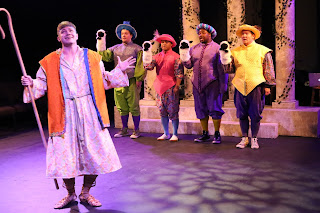 “Could this be the greatest show New Line Theatre has ever put on stage? It is, in its brash, tight dance numbers, along with a dozen shimmering vocal solos. Highly professional dance and beautifully sung '80s pop music drive Head Over Heels like a fury. It's a stagey whirlwind, with an ultra-thin layer of Elizabethan style, in which a riot of candy-colored doublet and hose is wedded to the equally colorful modern music of The Go-Go's. . . Maybe it's just the smoothest, most relentlessly ‘Broadway’ musical they've ever done. Scott Miller and Mike Dowdy-Windsor co-direct with genuine humor and sensitivity. But they're steamrollered by their own hard-charging chorus: a virtually flawless army of energetic singers and dancers, perfectly choreographed by Michelle Sauer and Sara Rae Womack.” – Richard Green, TalkinBroadway

“A triumphant romp of musical theater. . . Guiding things from the serious to the surreal, directors Scott Miller and Mike Dowdy-Windsor have created a totally rad mashup that explores the themes of gender, compassion, political diplomacy that delights in not taking itself too seriously. Groovy to the max.” – Rob Levy, BroadwayWorld

“It’s hard to imagine a more joyful swirl of activity than theatergoers are treated to in Head Over Heels – a show improbably set to the music of the Go-Go’s. . . . Co-directors Scott Miller and Mike Dowdy-Windsor bring a freewheeling spirit to the proceedings, spinning a fantastical tale of romance that plays like A Midsummer Night’s Dream fueled by controlled substances. . . Choreographers Michelle Sauer and Sara Rae Womack apply inspired movement to Tom Kitt’s arrangements of Go-Go’s songs, and the New Line Band – led by music director and keyboardist Nicolas Valdez — lends the show an in-the-moment electricity. . . Head Over Heels occasionally succumbs to silliness, but the show is engagingly and relentlessly upbeat. It’s a party you won’t want to leave.” – Calvin Wilson, St. Louis Post-Dispatch

“A wild and mind bending mix of cultures delights at New Line Theatre as the recent Broadway smash musical Head Over Heels keeps the audience rocking and laughing. . . Special props to the mind boggling choreography by Michelle Sauer and Sara Rae Womack who also are part of the eight person chorus. Not only is the dancing complicated and dazzling, but is executed so well by this talented cast that it really makes you take special notice. . . Co-directors Scott Miller and Mike Dowdy-Windsor have brought this trippy mix of the 16th and 20th century together in fine fashion with action, comedy and a group of actors who can pull off both with one of the strongest sung shows you’ll ever see or hear. And, of course, a nod to the powerful New Line Band under the direction of Nicolas Valdez who manage to keep up with the incredible nonsense swirling around on stage. Not to be missed, Head Over Heels is one of the best shows you’re likely to see all year (and it’s only March!). Get thee to New Line Theatre.” – Steve Allen, StageDoorSTL 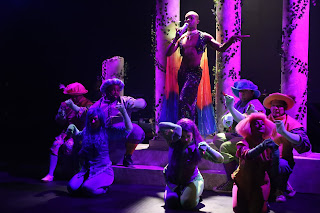 “Who better to pick up a wildly fun show like this than New Line? . . . Head Over Heels is a plethora of riches for the senses. There is so much to take in at all times, and it’s an absolute blast. The bright and colorful costumes are beautifully designed by the talented Courtney Gibson and Sarah Porter – some of their best work yet. The music, as mentioned previously, is sensational – thanks to the New Line Band, lead by Nicolas Valdez and Cullen Curth. And Rob Lippert’s scenic design is terrific as always – complete with great pillars and a cave of skeletons who were once unlucky explorers. And the choreography by Michelle Sauer and Sara Rae Womack is probably the best I have ever seen from the company” – Kevin Brackett, ReviewSTL

“As is to be expected at New Line, the casting is strong, and the singing is especially impressive. Everyone from the leads to the ensemble puts in a winning, energetic performance, . . Overall, the look and feel of this production is in keeping with the catchy, bright pop score and the general comic tone that blends the classical and the modern in a cleverly inventive way. Head Over Heels is another example of one of those shows that seems to fit better in a smaller setting like New Line than on Broadway. Staged at New Line’s home base, the Marcelle Theater, this show makes the most of the space and the closeness to the audience, who are seated on either side of the performance area here. It’s a fun, colorful, energetic and thoroughly winning production that marks another success for New Line Theatre.” – Michelle Kenyon, Snoop’s Theatre Thoughts

“New Line Theatre's current production Head Over Heels, directed by Scott Miller and Mike Dowdy-Windsor, is a winning show about love, forgiveness and finding one's true self in a non-binary world. It also shows just how good the Go-Go's were as songwriters, as the New Line Band delivers absolutely crackling versions of the score's seventeen songs.” – Paul Friswold, The Riverfront Times

“New Line Theatre's hilarious Head Over Heels should not be missed! . . It’s flat out great – Reese’s Peanut Butter Cup great – the highest form of flattery one can give a mash-up product like this . . . Head Over Heels features a tremendous cast from top to bottom. . . this might be the best choreographed production New Line has done yet.” – Jeff Ritter, Critical Blast

“The music of the ‘80s all-girl rock group The Go-Go’s is joyfully incorporated into this offbeat jukebox musical given an endearing interpretation in its current incarnation at New Line Theatre. . . it’s definitely a good time, indeed.” – Mark Bretz, Ladue News 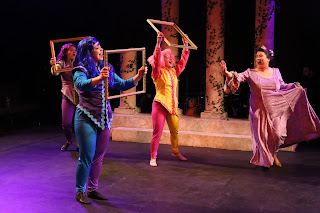 We live in an age of mashup, the art of combining forms and content that shouldn't go together, to form something new that reveals interesting truths. Head Over Heels is one of the most interesting mashups I've yet encountered, slamming 16th-century Elizabethan language up against 1980s punk-pop, and slamming them both up against the sexual and gender politics of today. It's a heady brew.

The result is breathtaking – funny, shocking, ironic, surprising, ridiculous, revealing, smart, insightful, and deliciously goofy. This show follows Sondheim's Cardinal Rule, that Content Dictates Form. In this world, love doesn't follow any normal rules, so neither does the show. Gender is nearly irrelevant here, and along with the royal family, we in the audience find many of our preconceptions and assumptions turned gleefully upside-down.

But though sexuality permeates the plot, this isn't a story about sex; it's a story about connection and self-awareness – and how one requires the other.

Every assumption we have is up for grabs in this world. Our usual ideas about gay and straight, male and female, love and lust, beauty and attraction, are all enthusiastically upended. And that often delicious dissonance between the real world and the world of Head Over Heels is the source of lots of rich, insightful, human comedy. We never know what's coming next in this show because this world operates so differently from ours. And that's the crazy fun of this adventure. It's never safe to assume anything in this world. Anything. 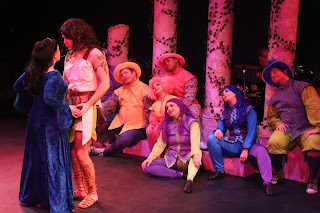 It wasn't all that long ago that catalog musicals (or jukebox musicals, as some folks call them) were just a punch line. At their best, those shows were guilty pleasures. But Jersey Boys showed us a catalog musical can be well-structured, well-written, and ultimately, really great musical theatre. Then Michael Mayer sort of became the Hal Prince of the catalog musical, as he expanded and enlivened the form with the brilliant American Idiot, Head Over Heels, and Jagged Little Pill. Since we already produced American Idiot in 2016, it's been huge fun working on this show now, seeing how this rich sub-sub-genre is evolving...