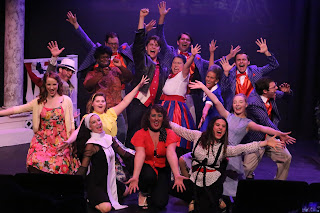 “I think it's important to mention upfront that New Line Theatre's current production of Cry-Baby is one of the most flat-out entertaining musicals you're ever likely to see. In fact, it's such a rambunctious good time that it's easy to overlook its sharper points about the dangers of blindly following the rules, the perils of failing to question why things are the way they are and the absolute mortal peril of settling for a stable sort of unhappiness when you could have true joy. That's a great deal of very serious subtext for a show that is essentially about a greaser and a good boy fighting over the same girl. New Line Theatre has been doing this exact sort of musical for 29 years, and if you think co-directors Scott Miller and Mike Dowdy-Windsor can't hide any number of satirical razor blades inside a delicious caramel apple, you haven't been paying attention. New Line's Cry-Baby is as intelligent as it is beautiful.” – Paul Friswold, The Riverfront Times

“It is a smart and ridiculous comedy, well-executed by its talented cast and crew, under the expert direction of Scott Miller and Mike Dowdy-Windsor. . . It is ludicrous, supremely entertaining, and leaves the entire audience laughing. But in case you didn't get your fill of humor, the New Line Band throws in a little extra cleverness as the audience exits. . . What Miller and Dowdy-Windsor are doing at New Line Theatre is something special to be sure. They are known for breaking the rules of musical theatre, for being the bad boys, and the result is a fresh, progressive theatre experience. If you like art that is in-your-face, not shy, and politically provocative, you'll want to invest your time and resources supporting their work.” – Tanya Seale, BroadwayWorld

“Now and then, the sequel (or the remake) is better than the original: in the case of Cry-Baby the Musical, much better. Drop everything and go see New Line Theatre's return to Cry-Baby, the unmistakably John Waters musical, for a prime example of something that's vastly improved with age. . . This new production is a pitch-perfect comedy from start to finish. It ripples with laughter and pulses with exciting songs. . . Somehow, all the subtle cues of a John Waters film are lovingly reincarnated into this grand stage production.” – Richard Green, TalkinBroadway

“Despite its slyly simplistic conflict and Happy Days vibe you may find yourself pondering the surprising depth of this show long after you’ve left the Marcelle Theatre in Grand Center. That squeaky clean veneer hides a relevant allegory of modern America, where the truth is obscured at all cost, where people who are a little different from the accepted norm are marginalized or shunned, and where the worst offenders are the ones who have claimed responsibility for upholding and protecting the moral fabric or our neighborhoods, our cities, our states and our nation, for protecting the truths we hold self-evident while doing everything they can to deny some slice of the great American pie chart their rights to life, liberty and the pursuit of happiness. Look at those people through the Cry-Baby lens and you’ll realize just how many Baldwin Blandishes there are in positions of power, and how exceedingly rare a Wade Walker-style rebel truly is. I bet most folks think John Waters is just a dapper fellow with a pencil-thin mustache who writes funny little films, but don’t let him fool you. He knows. He deftly painted the fundamental truth of his tale over with broad strokes of comedy, knowing that most people will be satisfied with a few good laughs and a happy ending. I think he also invites you to look deeper, if you dare. Look no further to see for yourself why New Line Theatre’s presentation of Cry-Baby should not be missed, whether you’re a contented theatre fan or a dedicate truth-seeker.” – Jeff Ritter, Critical Blast

“High-spirited and hilariously engaging . . . Cry-Baby rocks. Directors Scott Miller and Mike Dowdy-Windsor apply the trademark, lightheartedly irreverent New Line touch to the show, which the company first produced in 2012. And they elicit spot-on performances — particularly from Caleb Miofsky and Grace Langford, who play off each other wonderfully. Also contributing significantly to the show’s success are the choreography by Michelle Sauer and the music direction by Nicolas Valdez and Marc Vincent. Some musicals enter the theatrical canon — a shortlist might include Cabaret, Oklahoma! and West Side Story. Others merely aspire to leave audiences smiling, and on that level Cry-Baby the Musical delivers.” – Calvin Wilson, St. Louis Post-Dispatch 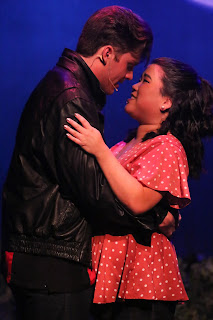 “New Line Theatre brings John Waters’ quirkily appealing movie from screen to stage in an energetic production that features a clash between cultures – social and musical – that points out, in not so subtle ways, that the more things change, the more things stay the same. The production bristles with energy and hormonal frenzy that’s played for laughs, but delivers plenty of commentary on everything from classism to our definition of beauty.” – Tina Farmer, KDHX

“New Line Theatre gets its 29th season of adult, alternative musical theatre off to a smart, high-stepping start with the return of its delightful 2012 regional premiere of the rockabilly musical, Cry-Baby. . . Fast times in Baltimore and the clashing of cultures rule the day in this high-spirited, joyful romp of a musical. You’ll shed nary a tear for Cry-Baby but likely instead laugh and tap along in unison with its appealing music.” – Mark Bretz, Ladue News

“Once again, directors Scott Miller and Mike Dowdy-Windsor have put together a youthful cast that sparkles with energy as they sing and dance their way through one hilarious song after another. The last time that New Line staged Cry-Baby in 2012, I wrote that you’ll laugh too hard to catch all the clever lyrics. That’s still true. . . . If you go for smart fun with a contemporary edge, this is the musical for you.” – Judy Newmark, All the World’s a Stage

“A rousing, fun new production. It’s one of those shows that seems made for this company, and the excellent cast of veteran New Liners and talented newcomers makes the most of every moment. . . .Overall, this is a great looking and sounding show with a satirically upbeat 50s flavor and broadly comic tone. With some truly great performances and a memorable score, Cry-Baby is a hit. It’s another example of a show that works better at New Line than it probably would (and did) on Broadway. It’s also (if I haven’t mentioned this before) a whole lot of fun!” – Michelle Kenyon, Snoop’s Theatre Thoughts

“Cry-Baby offers a fresh take on the cult classic film that translates wonderfully to the musical stage. Directors Scott Miller and Mike Dowdy-Windsor do what they do best, and breathe fresh life into a show that was taken from Broadway far too soon. The show will have you laughing non-stop, with terrific performances and great songs that are sure to stick in your head.” – Kevin Brackett, ReviewSTL

"Boy, is it fun. . . This all sounds relatively wholesome except for the sideburns and leather jacket. But it’s John Waters, so be assured that it’s not. The songs range from the opening number “The Anti-Polio Picnic” to “Girl, Can I Kiss You with Tongue?”. (And this is before the MeToo era, very responsible of him to ask.) Scott Miller and Mike Dowdy-Windsor’s direction gives quite a bit more than a generous amount of very wet osculation, making this pretty much a not-for-little kids show, no surprise at New Line. . . A delightful piece of work, escapism in a very fine form.” – Ann Pollock, St. Louis Eats and Drinks 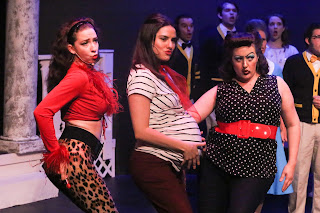 Cry-Baby opened on Broadway in 2007 and closed less than two months later. New Line snagged the rights in 2012, and we mounted the first regional production after New York, to rave reviews and sold-out houses. So why bring back a show we've already produced?

With its themes of class and injustice, Cry-Baby is even more relevant now than it was when John Waters' original film was released in 1990 or when the musical debuted. Today in 2019, issues of class and injustice are more in the news and on our minds than they have been in a long time. Sometimes it even feels like we're moving backwards...

Cry-Baby is worth bringing back because this show seems more relevant than ever, socially, politically, and artistically, as we sit here, now well into this new Golden Age of musical theatre, and as our society stumbles awkwardly into the Information Age.

Under the surface of the narrative, this show charts a battle between Show Tunes vs. Rock and Roll. The Drapes sing rock and roll, and the Squares sing show tunes. And by the end, after an evening-long and surprisingly subtle sing-off, rock and roll wins.

This is interesting artistically because the musical theatre as an art form is having that same battle, which has been going on since the mid-1990s; and in the real world too, rock and roll is winning. Rock is becoming the default language of the American musical theatre. And now (at least, most of the time), the use of old-school show tunes is ironic, a device that tells us something about the character or story.

I’ve realized that every second of Cry-Baby is ironic. Even the music is ironic. The choreography is ironic. Literally everything about the show is ironic. The show opens with what seems on the surface to be a traditional, musical comedy “Happy Villagers” song, where the community introduces itself and sets up the environment for the story. (That kind of song is going extinct, though, since so few musicals today have a big chorus representing the community.) But in Cry-Baby’s world, the Happy Villagers are suburban snobs celebrating conformity.

The whole show is full of that kind of rich, deceptively meaningful comedy. On one level, this story is about seeing beyond the surface of people and things, but unfortunately, Broadway wasn't able to see past the surface of this script and score. We are. It's been such fun returning to this incredibly funny, incredibly rich material. Enjoy the crazy ride!