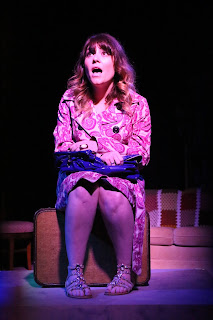 “New Line's Tell Me on a Sunday is surprisingly moving. . . as intimate as a handwritten letter, and as welcome, too. It's a surprising change of pace for the man who ambushed the world with the monstrous Starlight Express. Of course it's no surprise that New Line Theatre's season-closing production of the show wrings so much joy from Tell Me on a Sunday; the company has a way with musicals . . . a lovely little show that celebrates our human need for love. It's an undeniable winner...” – Paul Friswold, The Riverfront Times

“This newest production's director, Mike Dowdy-Windsor (who's made this show deeply personal and witty and strangely enlightening), says this batch of songs, united by a single, complex character, is what Sir Andrew calls 'the definitive version.' The well-known composer is probably right: Sarah Porter has four or five necessary costume changes, and about as many (unseen) lovers through the roughly 70 minute musical. But what makes it definitive is that it's all so psychologically clear and enthralling, full of twists and turns and self-deceptions that we laugh at how deep it all goes, into Emma's dreams, and (often) into her scorn as well. It's like Sex and The City, without the sex; or Bridget Jones' Diary, with more than twice as many lovers. And in lieu of sex (and in lieu of Hugh Grant or Colin Firth), we get a boatload of great songs that take us on one stirring emotional journey after another, thanks to Ms. Porter's searching soul. It's a very fair trade.” – Richard Green, TalkinBroadway

“I was thoroughly enthralled and impressed by the production. The performance, transitions, and direction ensure the show is an absolute delight while establishing Sarah Porter as a rising star in St. Louis theater. . . Porter expertly handles the vocals and, under the direction of Mike Dowdy-Windsor, deftly navigates the emotional context of the story. . . What captivated and mesmerized me was Porter's remarkable performance, and for that I could watch the show again and again.” – Tina Farmer, KDHX

“This production by New Line Theatre is probably the closest you'll find to its original vision. . . it radiates perfection under Mike Dowdy-Windsor's direction, and in the process, provides actress Sarah Porter with an excellent vehicle to showcase her exceptional talents. . . a one person show would seem to be a rather daunting task for any performer to undertake. But Porter has the chops and the seasoning to completely personify Emma, making her character fully realized, and giving incredible voice to the beautiful score that flows constantly through the show. There are some truly special tunes among Webber and Black's compositions, and Porter completely inhabits each and every one of them, making us laugh at times, but more often, touching our hearts in a deeply personal way. . . I recommend that you see it as soon as possible. It's a real treat!” – Chris Gibson, BroadwayWorld

"Heartaches and hope are the recurrent themes of the Andrew Lloyd Webber one-act musical, Tell Me On a Sunday, which has been ferociously tackled by New Line Theatre. . . A feisty Sarah Porter, who has brought a number of independent, willful and lively women characters to vivid life for New Line, fearlessly seizes the intimate stage at The Marcelle Theatre, grabbing our hearts as she commands our attention for a 23-song cycle without an intermission. . . Porter gives a virtuoso performance, a marathon of mettle — a testament to her talent but also her ability to courageously show us every facet of this ordinary woman. . . This show is a stripped down, change of pace for New Line, and appealing summer fare to close their vibrant 25th anniversary season.” – Lynn Venhaus, Belleville News-Democrat

“New Line Theatre’s local premiere of this one-act is an enjoyable and entertaining evening thanks to the sweet, clear voice and animated expressions of Sarah Porter as Emma. Furthermore, she’s given substantial support by the muscular musical accompaniment of the New Line Band under Nate Jackson’s disciplined musical direction. . . The tunes range from thoughtful ballads to spirited, body-swaying numbers which demonstrate Webber’s considerable musical range, while Black’s easy-going lyrics prove a wise match for the infectious melodies. . . a touching presentation of one young woman’s search for fulfillment in an often indifferent and complicated world...” – Mark Bretz, Ladue News

“Sarah Porter is pure magic . . . Gifted with beautiful eyes that capture your attention and a smoky voice that can crack wise one moment and make your lower lip quiver with deep emotion the next, Sarah is the perfect choice to play Emma as she owns the stage and the audience’s attention for a little over an hour with no intermission. . . a brisk but brilliant experience that cements Sarah Porter as a hometown star . . . I’m telling you right now to plan to see New Line Theatre’s production of Andrew Lloyd Webber’s Tell Me on a Sunday as soon as possible.” – Jeff Ritter, Critical Blast

“The show is not about incidents. It’s about feelings. Which Sarah Porter embodies with total conviction. She and her director Mike Dowdy-Windsor have thoroughly explored Emma’s psyche, and they bring an abundance of drama and variety to the piece, along with vivid characterization and lively movement. Porter pleases eyes with her costumes and ears with her singing.” – Gerry Kowarsky, Two on the Aisle

“Sarah Porter shines in Tell Me on a Sunday . . . As a member of the New Line Theatre ensemble, Porter has shown plenty of range in role after role, season after season. . . But she takes on her biggest challenge in New Line’s latest production. . . She meets that challenge with aplomb — and charm to spare.” – Judith Newmark, St. Louis Post-Dispatch

“Sarah Porter nails it, kills it and every other theatrical cliche you can think of with a stellar breakout performance. . . Sarah Porter not only sings the role with perfection, her acting is superb and she maintains that British accent throughout in a show that’s completely sung. Facial expressions, body language and the range of disappointment, hope and joy in her voice make for a character and a show that you can’t help but fall in love with. What a stunning performance.” – Steve Allen, Stage Door St. Louis

“Porter certainly does shine. It’s a remarkable performance, played out with an impressively believable English accent, as well. . . This is a show that could easily come across as more of a concert than a play, but thanks to the clever, dynamic staging of director Mike Dowdy-Windsor and Porter’s superb performance, that doesn’t happen here. This is a fully staged, fascinating story, centered around a complex character who is learning about herself as she learns about her world and her relationships. There’s a lot to talk and think about, as well as some real humor and drama.” – Michelle Kenyon, Snoop’s Theatre Thoughts