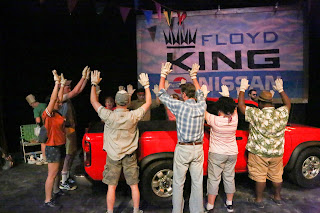 “The songs in this musical are so damn good. It’s hard to find the words that will truly do them justice. . . With great music, a talented cast and a tremendous group of creatives, Hands on a Hardbody is the surprise hit of the year. There’s something in it for everyone, and surely some aspect to relate with. Whether it’s a truck, or something else your chasing, you’ve got to ‘just keep holding on.’” – Kevin Brackett, ReviewSTL

“In the case of the musical Hands on a Hardbody, story, music and production all come together seamlessly in New Line Theatre’s brilliant and captivating presentation. . . considering that most of the performers spend most of their time literally standing around that cynosure vehicle, Hands on a Hardbody is deceptively exhilarating. . . If you like many musical styles all done impeccably, take this production for a test run.” – Mark Bretz, Ladue News

“Looking over a list of New Line Theatre’s shows for the past 23 years is a very telling experience. This is a group dedicated to restoring the old and embracing the new. That’s why their current production of Hands on a Hardbody shouldn’t shock you that it’s so damn good (it really is), because this is exactly what they do so well. They take something tuneful and different, perform it enthusiastically in an intimate environment, and the audience is rewarded with a fresh and invigorating experience. Go see Hands on a Hardbody now!” – Chris Gibson, BroadwayWorld

“Because of its big heart and real story, the theatrical experience is refreshing, an antithesis of spectacle. It’s warm, funny and touching – clever showcasing, compassionate writing by Pulitzer Prize-winning Doug Wright and pleasing songs by Tony nominees Trey Anastasio and Amanda Green. . . This production features a vitality and nobility that makes it a must-see. You might not have heard of this show, but you definitely won’t forget it.” – Lynn Venhaus, Belleville News-Democrat

“The tender and often funny show comes off as the little show that could. There is nothing huge about it, except it’s packed with emotion and originality, and is a true treat for seasoned or new theater goers alike. Even the cynical will enjoy it. . . Perhaps this clever and heartfelt show—that treats its characters with the utmost respect—never belonged on the Great White Way. It definitely belongs at New Line.” – Christopher Reilly, Alive Magazine 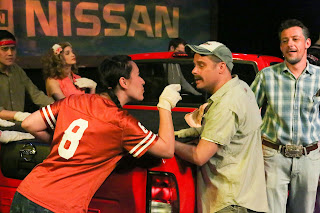 “This bittersweet musical considers the fragile state of the American Dream in the 21st century, with heartfelt songs and familiar characters. . . The result is a solid production, resonating with simple truths and honest, realistic characters who manage to find silver linings in their struggles. . . Scott Miller’s sharp eye and sure direction keep the show visually interesting; with a surprising amount of action considering most of the cast keeps one hand firmly planted on the large truck center stage. The result is an emotionally compelling show that pays tribute to the resilient spirit of the American people without relying on the potentially false promise of the American Dream.” – Tina Farmer, KDHX

“Director Scott Miller has a knack for bringing renewed life to musicals, old and new, and Hardbody is no exception. Sucking you in from the first extended number, ‘It’s a Human Drama Thing,’ . . Your heart breaks a little each time someone takes their hand off of that truck. Go see it.” – Andrea Torrence, St. Louis Theatre Snob

“It’s a pretty sure bet that in the next five years or so, we’ll all have some gizmo called Google Maps of the Soul. And with that app, whenever you’re heading for abstract locations like the intersection of Hope and Despair, you can know about it well before you ever hit the off-ramp. The same advance notice would apply to the cerebral cross-streets of Laughter and Tears, and Faith and Skepticism, as well. But till then, you can just bookmark all those cataclysmic mental latitudes (with a lot of delicious jokes and songs, too) by making one stop at the regional premiere of Hands on a Hardbody, under the surprisingly lithe and dynamic direction of New Line Theatre’s artistic chief Scott Miller. . . And at precisely that moment, you realize you have reached your psychological destination: a crossroads of where we were, and where thought we had been going.” – Richard Green, TalkinBroadway

“With some catchy songs, a strong cast and excellent staging, New Line brings this show to life in vibrant, life-affirming style. . . It’s a stirring story of friendship, love, faith, disillusionment, fear, economic hardship, and the ever-enduring sense of hope that there’s something better down the road. . . It’s a vibrant, energetic, and deeply compelling production with characters just as full of vibrant color as the truck they are all vying for. Although that truck can ultimately only go to one person, everyone is a winner in the long run, and that includes the audience of this big, shiny, colorful prize of a show.” – Michelle Kenyon, Snoop’s Theatre Thoughts

“Last year, Hands on a Hardbody had just a short run on Broadway. New Line – which took similar chances on High Fidelity and Cry-Baby – gives the show its first production since then. Prediction: It won’t be the last.” – Judith Newmark, St. Louis Post-Dispatch

“It’s been my experience that any musical in which lyricist and composer Amanda Green is involved is always a ton of fun. . . That seems to be Scott Miller’s specialty, finding discarded musicals in the Broadway junkyard, like High Fidelity, and turning them into regional theatre gold. Amanda Green was present for the opening performance and she appeared to enjoy herself immensely. Of course it’s easy to enjoy a production featuring so many of the top voices in the St. Louis theatre scene today.” – Jeff Ritter, The Trades

“There are plenty of bright spots to this quirky show, which, judging from the standing ovation it received Friday night, succeeds on the passion of its cast and singularity of its execution.” – Malcolm Gay, The Riverfront Times 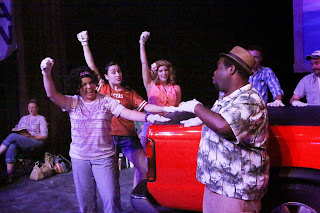 Hands on a Hardbody is about a real-life contest that went on for years in East Texas, in which the last person standing with their hand on a pickup truck, often after three or four days, wins it. The contest ended after 2005, when one of the contestants lost, went across the street, broke into a Kmart and shot himself in the head.

But our story isn’t really about the truck. It’s about the American middle class struggling to climb out of the massive, seemingly inescapable hole that our government threw us into in the 1980s and again in the early 2000s. And it’s also about what makes us Americans – attitude, grit, bravado, stubbornness, contradiction, self-delusion, toughness, aggressiveness, appetite, commitment, authenticity. These people are America.

This is a character study of our country.

But it’s not just about economic salvation; it’s also about the salvation of dignity. Many of these people have had their dignity taken away from them, by Reaganomics (in the original 1997 documentary) or the 2008 recession (in the musical). This contest is a chance to reclaim that lost dignity.

At first, I thought this was a story about holding on, hanging tough. But now I see that, even more, it’s about what we value, a very timely topic in these tough times. Every one of these contestants thinks this truck is incredibly important, their salvation, their only hope. In the first two songs in the show, they each tell us how high the stakes are for them, how desperately they need to win, how it will change or even save their lives. But then all but one of them lose, and we find out in the last song that they were wrong about the truck.

The truck wasn’t the point after all, they discover. It’s the journey, not the destination; the ordeal, the striving, that teaches them what they need to learn. On the other hand, many of them wouldn’t take this journey (ironically enough, by standing around a truck that never goes anywhere), if not for this contest and this truck. In a way, none of them really needs to win the truck, but they all need the truck to find what they are missing.

The contest shows them that they were on the wrong path. They were valuing things and ultimately, they all learn that people – simple human connections – matter more.

Benny is right, after all; it is a human drama thing.