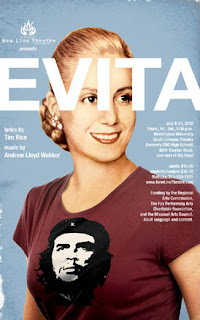 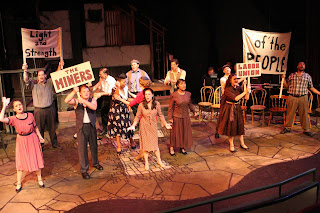 “Simply put, New Line Theatre’s current production of Evita absolutely rocks! Employing a more intimate staging and utilizing stripped down orchestrations acts to reinvigorate the work, personalizing the story and adding a real edge to the music. This is one of the chief reasons I'm always drawn to New Line’s productions; they don't conform to the norm, offering regular theatre goers the opportunity to witness creative and imaginative takes on new works as well as more familiar ones. If you're already a fan of Evita (or musical theatre in general), or if you've only seen the misguided movie version with Madonna in the lead role, and you've been turned off to the subject as a result, then you owe it to yourself to check out New Line's darkly engaging presentation. . . Scott Miller’s direction is impeccable. The story moves along at a whirlwind clip, with seamless transitions allowing the action to flow unabated. The cast is sharp and focused throughout, and the ensemble singing is gorgeous.” – Chris Gibson, BroadwayWorld.com

“Tim Rice and Andrew Lloyd Webber come in for their fair share of criticism, but future historians may judge them a little more kindly than we now suspect, if this new Evita is any guide. True, we already know that Lloyd Webber can give us lovely musical passages. And here, director Scott Miller's excellent New Line chorus and band, featuring a fiery leading lady, sets our hearts marching into battle. . . . It's a perfect show for this moment in (North) America.” – Richard Green, TalkinBroadway.com

“I was intrigued because Scott Miller is the one director I can think of who would find the politics in Evita more interesting than the style. What New Line gives us is an Evita where the incrusted style has been stripped away and the politics have been beefed up. . . I really admire what Scott Miller and New Line found in Evita, and I’m afraid the standard version is going to disappoint me even more when I see it next.” – Gerry Kowarsky, Two on the Aisle

“A 4.5 on a scale of 1-to-5. Having neither the space nor the quantity of musicians to present the full orchestration of Lloyd Webber's music, New Line Theatre artistic director Scott Miller wisely focuses instead on a sextet of players who provide passionate, intense support for the performers on stage. Aided by the delicious support of choreographer Robin Michelle Berger, who accentuates the array of musical motifs with an eclectic mix of terpsichorean moves, the result is an engaging and absorbing account of not only one man’s (lyricist Rice) interpretation of a time and place but a riveting theatrical experience. . . Miller’s Evita is visceral, raucous and always entertaining, bringing out the best in Lloyd Webber’s complex and diverse score and underscoring Rice’s sophisticated and compelling lyrics in clever fashion.” – Mark Bretz, Ladue News

“New Line Theatre, a company that regularly turns its shoestring budget into vivid ribbons of musical theater art, is probably best known for offbeat, counter-cultural work. Shows like Bat Boy, Love Kills and Return to the Forbidden Planet seem to define the distinctive New Line brand, partly because they suit artistic director Scott Miller’s sensibilities and partly because New Line is the only place in town you’re apt to see them. But there's another important thread that runs through New Line's history: stripped-down performances of big-name musicals. In seasons past, New Line has produced shows like Camelot, Man of La Mancha, and Cabaret – shows that we associate with lush productions at the Muny, the Fox or Stages St. Louis. Evita, the latest New Line production, belongs to this adventurous tradition.” – Judith Newmark, St. Louis Post-Dispatch

“Only two nights remain to see the New Line production of Evita, and it's worth trying to get there. Every performance for the last week has been sold out, so it may not be easy, but I highly recommend it. With John Sparger a wonderful, sardonic, sarcastic Che and Taylor Pietz a more-than-tyrannical Evita, this is a splendid production, and director Scott Miller’s direction is spot-on. His ideas work well, and his casting eye and ear have put together an exciting chorus that never falters. . . Robin Michelle Berger's choreography is splendid. . . The chorus is rich and powerful. Pietz, in a half-dozen different gowns along the way, works hard, but I thought Sparger's lounge-lizard approach to the role of Che, a counterweight to Pietz' Evita and as a realistic response to her pie-in-the-sky political platitudes, dominated. . . Todd Schaefer's set, Thom Crain's costumes and Kenneth Zinkl’s gave Evita a smooth and polished look, a strong contrast with the edgy score. The story of power, and its corruptive qualities, is as strong as it ever was.” – Joe Pollack

“Evita, the celebrated 1978 musical by lyricist Tim Rice and composer Andrew Lloyd Webber, is what might be considered a big undertaking for any theatre company, so, not a lot of small groups in the St. Louis area have attempted to mount a production. But one such has taken on the challenge: New Line Theatre. What results is a impressive and entertaining.” – Laura Kyro, KDHX-FM

“Taylor Pietz is a riveting Evita. . . . The ensemble is just as impressive as the principals. Each member’s many expressions manage to create a real human being with a back-story. We see a spectrum’s worth of feelings for Eva, from affection to unabashed adoration. How hopeful they look in ‘A New Argentina,’ too.” – Peter Filichia, TheatreMania.com 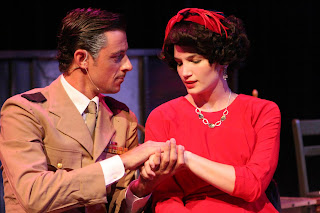 Why do we tell stories anyway? It’s how we work out who we are as individuals and as a society. As Stephen Sondheim has said, art makes order out of the chaos of our world. It boils down and focuses, editing out the extraneous, allowing us to see more clearly the world around us and our place in it. We use storytelling to work through our problems, our fears, our dreams, our ambitions.

Because even though it’s set in Argentina in the 1930s and 40s, and written in the 70s, it is so much about this time and place it’s almost hard to believe. In this election year, we can so easily see Barack Obama, Sarah Palin, and Glenn Beck (among many others) in the story of Eva Perón. A people divided, passionate opposition versus devout – dare I say, mindless? – adoration. Just listen to Che’s first song, “Oh, What a Circus,” and you may well hear echoes of the current political wars in Washington. Listen closely to “Perón’s Latest Flame” and you’ll hear the sexist flames that were thrown at Hillary Clinton in 2008.

Eva Perón was a genius at public speaking. But she was not interested in appealing to the intellect; she wanted to stir emotion. That’s also true of current politicians like Sarah Palin and Michele Bachmann, and it’s more true than ever of political media celebrities like Rush Limbaugh, Glenn Beck, Sean Hannity, and the rest.

In exploring Eva’s obvious sex appeal, we can see that same strange combination of sex object, political figure, and savior (“a fantasy of the bedroom and a saint”) that has made Sarah Palin such a popular figure today. One news commentator wrote during Eva’s famous Rainbow Tour, “She was better at being brilliant with short, evasive phrases, and circling the question without actually answering it.” That’s exactly the charge leveled against Palin today. Likewise, in the extreme rhetoric, the demonization of opponents, and dubious claims about what The People want, it’s hard not to hear Glenn Beck warning us breathlessly about phantom communists, socialists, and Marxists in the White House.

So just as we live in a divided country at present, we offer you a “divided” story. The brilliance of Tim Rice’s narrative structure lies in the dichotomy between the cold, political, Brechtian world of Che’s narrative and the passionate, romantic, melodramatic world of Eva. With few exceptions, these two central figures exist in opposing styles and theatrical philosophies, as different as their political and social philosophies. This show requires something of you – to listen to both sides and form your own opinion. Was Eva a saint or a villain? The truth probably lies somewhere in the middle.

If we try, maybe we can find that truth in the real world too.