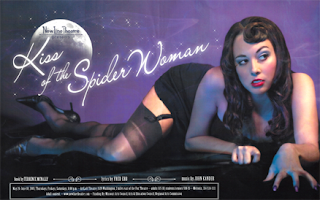 Music by John Kander
Lyrics by Fred Ebb
Book by Terrence McNally
based on the novel by Manuel Puig
May 26-June 18, 2005
ArtLoft Theatre, St. Louis
http://www.newlinetheatre.com/spiderwomanpage.html 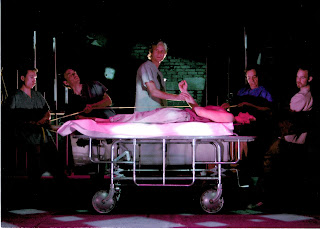 “Director Scott Miller has cleared the bases with a rousing grand slam of an interpretation of this fabulously rich musical. It’s a gritty and glorious salute to the combined genius of Kander, Ebb and McNally, with appropriate respect to Puig, and his cast is clearly equal to the task.” – Mark Bretz, Ladue News

“Over the years, New Line has done well with other shows by John Kander and Fred Ebb (Cabaret, Chicago). But this production demonstrates that New Line’s artistic director, Scott Miller, has an affinity for their viewpoint that transcends the ‘greatest hits’ approach. The story of Molina and his revolutionary cellmate, Valentin (Nicholas Kelly), combines left-wing politics, imaginative musical numbers and a seedy, ripped-stocking glamour. That’s the New Line aesthetic in a nutshell. It’s a great fit.... It adds up to a fascinating evening of unusual theater... the New Line production never relinquishes the play’s central point. That deals with questions of personal loyalty and overriding social good. It won’t make theater-goers feel comfortable. But Miller and his company can feel proud to address a play so hard to take and make it pay off on its own terms.” – Judith Newmark, St. Louis Post-Dispatch

“Director Scott Miller knocked the casting ball out of the park by bringing together a top-notch and very talented group of actors... Miller should be doubly proud: first, for what he has accomplished this season with New Line Theatre, but also for being able to bring all of these fine actors together for a truly extraordinary performance.” – Jim Campbell, Playback St. Louis

“Kiss of the Spider Woman is one of New Line’s best productions.” – Bob Wilcox, KDHX-FM 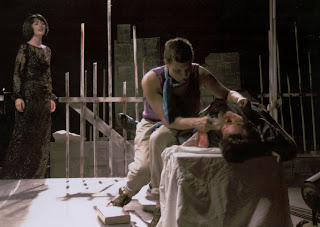 We’re in Buenos Aires. It’s 1976. President Juan Peron returned to Argentina a few years ago after eighteen years in exile, but he died soon after. His second wife Isabel took over the presidency, but she was removed from power in March of this year by a military junta under General Videla. Now, no one is safe. You keep hearing about people disappearing – liberals, leftists, union leaders, journalists, artists, students, even priests – and sometimes just ordinary people who are in the wrong place at the wrong time.

You know one of those.

This is no time for heroism or idealism in Argentina; this is a time for keeping your mouth shut. Anyone suspected of favoring these groups or their ideas is in danger of arrest. All cultural life is now subjected to strict censorship. The government has taken control of the labor unions. People are being kidnapped on the streets and never heard from again. The prisons are overflowing with political prisoners and you hear stories of the most horrific torture. There are no trials or even any pretense of legal process. You’ve even heard rumors that there are concentration camps like the Nazis had.

Lately, the mothers and grandmothers of those who’ve been “disappeared” – los desaparecidos – are standing up to the government. Every Thursday, they assemble in the Plaza de Mayo in front of the Presidential Palace, demanding information on their missing children. So far, nothing has happened to these women, but you wouldn’t dare join them.

You’ve heard so many stories on the streets about the prisons, coming from the few Argentines who’ve actually been released. They say some prisoners aren’t allowed to lie down on their cots during the day, and the strain of this can cause paralysis or atrophy of the legs. They’re not allowed any contact with family or friends, and most prisoners are afraid to write to loved ones, for fear they too will be targeted. They say the prison guards stage fake escapes and executions with mannequins to scare the prisoners. Newspapers and radios are banned insider the prison, and only books written before the French Revolution are in prison libraries – so prisoners “don’t get any ideas.”

You’ve heard stories about prisoners being experimented on with tranquilizer darts, tortured with cattle prods, having the soles of their feet beaten with batons, having metal buckets placed on their heads and then the buckets hammered with clubs, having electrical wires applied to breasts, vaginas, anuses, penises, tongues, and other body parts. There are even rumors that in some cases, prisoners’ bellies are slit open and then they’re dropped in the river as “fish food.” Some are thrown out of airplanes fully conscious. And at the end of a prisoner’s term, he or his family has to pay the state back for the cost of his imprisonment or he won’t be released.

The people of Argentina keep hoping the international community will step in and stop the horrors, but it appears that the United States actually supports Argentina’s military government. Amnesty International has sent representatives but they have no real power.

It’s like a bad dream and everyone in the country is just waiting to wake up. But the dream just goes on and on…