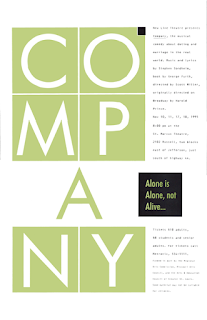 DIRECTOR’S NOTESIt has been said that you can do anything you want in a musical as long as you do it within the first ten minutes. In other words, audiences will accept any style of music, any unusual structural devices, as long as the show's particular ground rules are established in the first ten minutes of the show. And that's exactly what the first song in Company does. The opening bars of the song “Company” instantly establish the frenetic, pulsing rhythm of the city and of modern life. When the voices enter, the couples are established as the focus of the show, along with their smothering affection for Robert. We realize that everything we see will be through Robert's eyes; and the show's surreal style suggests that it's all happening in Robert's mind, in his memory, as he tries to sort out his questions about commitment.

The couples begin the opening song with their various nicknames for Robert, which will return as a leitmotif (a musical theme representing a particular idea) throughout the score. This quickly segues into short phrases that illustrate how hard it is to communicate with Robert. We hear the voices through Robert's ears, overlapping, overwhelming, smothering. In the last sentence of the song, the title of the show is equated with love, and by implication, both are equated with marriage. Before the song is over, Sondheim has established the style, structure, and pace of the show, the brittle cleverness of the lyrics, important relationships, and the major themes of the show.

Like many of Sondheim's scores, Company is filled with commentary songs. In more traditional musicals, songs grow naturally out of dialogue, and characters aren't aware of the fact that they're singing. But in many of the songs in Company (and in Follies, Into the Woods, Assassins, etc.), the characters step out of the scene and address the audience directly. This makes the audience step back and think about what's happening rather than just feeling. Company’s score is also unusual in its extensive use of musical motifs to connect characters and events. The “Bobby Buby' motif used throughout the show focuses our attention on the married couples in opposition to Robert, their attitudes toward him, etc. Both “Tick Tock” (the instrumental piece while Robert and April have sex) and “Being Alive” make interesting use of motifs from many other songs in the show. “Tick Tock” even quotes The Twilight Zone theme.

Company is a fascinating musical that uses music as an integral part of the narrative process, while it completely discards the traditional look of chronological storytelling. But very few other musicals have followed its lead. Most later “concept” musicals copied Company's construction but were afraid to totally ignore the conventions of narrative theatre. Company stands as one of the greatest innovations in the history of musical theatre, and we can only ask twenty-five years later, isn't it time for someone to take us the next step?

Everything I needed to know about musicals I learned doing Company. Well, while that may not be entirely accurate, I will say that the experience was invaluable in many ways. After dropping out of college, I moved home – completely lost about what to do with my life. I saw the audition notice for Company, and must have talked myself in and out of auditioning nearly a hundred times. I was dying to do a Sondheim show (I didn't know people actually produced anything of his besides Into the Woods), so I finally resolved myself to going. When I first rehearsed with the cast, I knew I was a part of something incredible. I learned how truly great musicals are constructed. I learned to take chances. I learned what the bond of theatre lovers is like. I took these things, and in time gained the direction and focus I had been seeking.