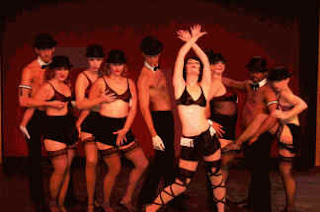 “Smart, steamy and a heck of a lot of fun, marking one of New Line’s strongest efforts” -- St. Louis Post-Dispatch

“Extremely entertaining . . . Because the New Line production is stripped down to its essence, it reveals something that neither of the flashier, more expensive New York productions embodied: likeability. Here, a winning cast captivates (rather than razzle-dazzles) us throughout the evening. . . All in all, this is the most fully realized New Line production I’ve yet seen. . . This is the sort of opportunity that musical theater lovers pray for, and then travel great distances to indulge in.” – Dennis Brown, Riverfront Times
“Chicago is highly enjoyable, with fine musicians and enough talent on the stage to keep things rolling from start to finish.” – Joe Pollack, KWMU-FM

“A rousing production . . . a capable cast is given license to gleefully cavort to the infectious, jazzy tone of the show, and New Line’s performers are up to the challenge.. . From the rollicking opening number of “All That Jazz,” featuring Brown strutting stylishly before the ensemble, to the closing “Hot Honey Rag” of Brown and Kinsella, Chicago is a high-camp treat of the first order.” – Mark Bretz, Ladue News

“A showy, brightly produced musical filled with extremely talented actors, singers and dancers, who give it their all.” – Cathy Cohn, The Vital Voice 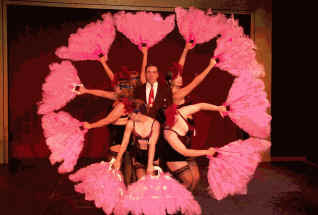 Chicago is set in 1924.And in 2002. It’s about real life murderers Beulah May Annan and Belva Gaertner, and also about O.J. Simpson, Robert Blake, Lorena Bobbitt, Jeffrey Dahmer, the Menendez brothers, Susan Smith, and Andrea Yates.

Chicago the musical wouldn’t exist without an audience. Vaudeville wouldn’t have either. And neither would the gavel-to-gavel coverage of the O.J. trial, or the endless cable news stories about Chandra Levy, or the gruesome details of Andrea Yates drowning her five children, told over and over again on TV in excruciating detail. We ask for it, Chicago suggests. We are to blame. How else can we explain why we sat transfixed watching those planes crash into the World Trade Center over and over and over, or repeatedly watched screaming kids running out of Columbine High School?

Is it a primordial bloodlust that just hasn’t been civilized out of us yet? Is it a violent streak burned into our species millions of years ago that we should just accept as innately human? Or is it something to fight, to overcome, to rise above?

As Arab Americans are now being routinely beaten up and threatened on American streets, we have to ask if September 11th unleashed a new patriotism in America or if it unleashed our only barely contained bloodlust, always simmering just under the surface, ready to boil over. Is Bush’s “War on Terror” really about making America safe again, or is it about finding the bastards who did that to us and tearing them limb from bloody limb? Maybe it’s about both.

Because Chicago is very much about our world in 2002 but takes place in 1924 – and is told entirely in the language of vaudeville acts – one of New Line’s greatest challenges has been in finding a contemporary physical and visual language that is equivalent to 1920s vaudeville. In other words, to make the point that this story lives both in 1924 and in 2002, we had to find a language that lives not just then, but in both times. We found ourselves asking what vaudeville would look like today if it had survived and had more successfully competed with movies and TV. Probably a lot like it did then, but morphed a bit – more sexual, more aggressive, more attention grabbing.

And thinking about all that raised another side issue. Vaudeville was one of America’s most popular cultural forms for almost sixty years (which is why it’s the perfect metaphor for Chicago's murder-as-entertainment), but then it suddenly died. And here we sit today, in the fifty-ninth year of the Rodgers & Hammerstein model, the basis for our modern American musicals. So we have to ask if the Rodgers & Hammerstein-style musical is going to survive. We’re already seeing rumblings of new musical theatre forms in many of the shows New Line has produced – Songs for a New World, Floyd Collins, A New Brain, Assassins, March of the Falsettos – and many of the shows on and off Broadway, like Urinetown, Bat Boy, The Last Five Years, and others. When we think about vaudeville, we sometimes forget it lasted that long and yet disappeared that fast. Could that happen to Carousel and Hello Dolly!, and Phantom of the Opera?