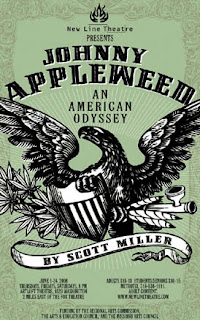 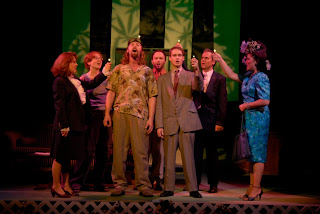 “This smart, engaging musical satire clearly intends to reclaim American mythology for folks whose political sentiments are proudly left of center. . . With book, music, lyrics and direction by Scott Miller, Johnny Appleweed has the energy and wit of the early Saturday Night Live. Indeed, there’s a gloriously irreverent sketch-comedy sensibility at work. . . Even if you don’t share its attitudes about marijuana, the state of American democracy or the current occupant of the Oval Office, Johnny Appleweed is likely to win you over. It’s a giddy delight.” – Calvin Wilson, St. Louis Post-Dispatch

“It may just be that producer/director Scott Miller has wasted his greatest talents on highly authentic revivals of other people’s shows these last sixteen years. It may be that all that time, he should have been writing musicals about other people just getting wasted. . . Johnny Appleweed is full of excellent melody and excellent humor carried through by highly proficient performers, in this latest entry in the St. Louis Political Theatre Festival. . . The physical direction sparkles, and the band led by Chris Petersen is agile and compelling. The songs are beautiful, and the jokes are nearly all sure-fire. . . It’s quite stupendous.” – Richard Green, TalkinBroadway.com

“It’s hard to believe that Johnny Appleweed is a musical – thankfully, it doesn’t resemble any of your typical Broadway fare. . . Without ruining the end, I’ll just say that it’s magical. In more ways than one. But the idea that was handed to me in the most obvious way during this musical was about popular culture. Too many people regard potheads as complete idiots, but this depiction of them was brilliantly intelligent. I really liked everything that they had to say. Maybe we should start listening to those potheads.” – Kaylen Hoffman, PlaybackSTL 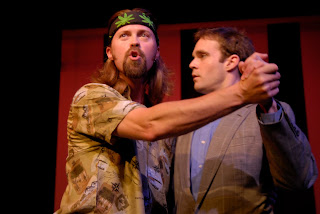 The early years of the new millennium were a fascinating time for our world, a time of lingering fear, of battling world views, of killing to answer killing, of lies “for the greater good.” In some ways, these years were a dark time for America, as truth quickly became subjective, as patriotism was questioned, as political agenda supplanted morality. It was the kind of time that King Arthur always feared, when Might defined what was Right instead of being used to defend what was Right.

But it was also a time of Light, when patriots across our country rose up decisively and reclaimed from our past the most sacred of all American traditions – political dissent. Much like John Adams and Thom Paine, these Americans fought fiercely for their country, this time in the pages of newspapers and magazines, on websites and in blogs, on television and radio, even in feature films. It was a time of genuine courage, when ordinary men and women were no longer afraid to Speak Truth to Power, to say that war is always wrong and that, though killing is sometimes necessary, it is never Right. It was a time when humans began finally to understand that the search for Truth is never over and that there is no single path. Minds opened, hands reached out, and bullies were finally and rightfully ridiculed in the most public of terms.

It was a time when Americans realized their government had been taken from them, had been slowly and subtly removed from the hands of the citizenry, by a dangerous few who believed we weren’t smart enough or tough enough to know the Whole Truth, that we couldn’t be trusted to make the right choices. So like their forefathers, Americans rose up in stark defiance, with public protest, impassioned debate in the halls of Congress, and perhaps most potent of all, political satire. After all, what robs a tyrant of his power more quickly than to be made the object of ridicule?

After golden eras in the 1770s, 1860s, 1930s, and 1960s, political satire returned home to our fruited plain, in theatre, film, television, and books, the sharpest knife in the arsenal of political discourse. And so the absurdity and danger of a government without oversight loomed over us for only a moment in history, until pens could be sharpened and presses could be fired up. As it was conceived and as it has always been, the people of these United States are still the best check and balance on tyranny ever conceived on earth. As long as we pay rapt attention and never divert our eyes, no one can ever dismantle the great experiment that is America.

We have the power. We are the government. We make the laws. And as long as we never forget that, then government of the people, by the people, for the people, shall not perish from the earth.