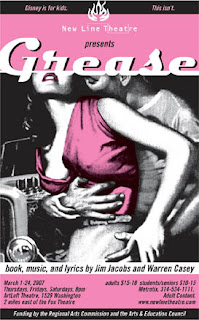 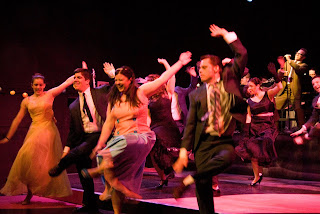 “Jim Jacobs and Warren Casey’s Grease is one of my favorite shows, and I’ve seen several different versions over the last few years. Having seen the movie when I was a teenager, I’d always preferred productions that included songs from the film. But, ever since I saw New Line Theatre’s raw, original take, I’ve become something of a purist.” – Chris Gibson, BroadwayWorld.com, reviewing the national tour in 2009

“The best thing about the current production of Grease by the New Line Theatre is the tight, driving band led by Chris Petersen. The night I was there, a good chunk of the audience stood around after the show to listen to Petersen channel Jerry Lee Lewis as the band wound things up. There is nothing dull on that bandstand.” – Bob Wilcox, West End Word 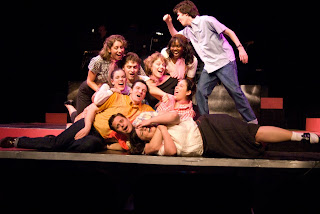 This was no cotton-candy musical comedy. It was smart, sly, insightful social commentary about one of America’s defining moments, a moment when our country moved from the repressed 1950s into the sexually adventurous 1960s, a moment when rock and roll – the first art form made exclusively for teenagers – was giving birth to the Sexual Revolution. Grease isn’t a story about young love, and its main characters are not really a teenage boy and girl. No, this is a show about sex in America. And the main character is rock and roll.

Critic Michael Feingold wrote in his introduction to the first published Grease script in 1972:


Grease does not discourse about our presence in Saigon. Nor does it contain in-depth study of such other 50s developments as the growth of mega-corporations and conglomerates, the suburban building boom that broke the backs of our cities, the separation of labor’s political power from the workers by union leaders and organization men. Grease is an escape, a musical designed to entertain, not to concern itself with serious political and social matters. But because it is truthful, because it spares neither the details nor the larger shapes of the narrow experience on which it focuses so tightly, Grease implies the topics I have raised, and many others. So I think it is a work of art, a firm image that projects, by means of what it does contain, everything it has chosen to leave out. And between the throbs of its ebullience, charm, and comedy, it conveys a feeling, about where we have been and how we got to where we are, that is quite near despair, if one wants to dwell on it.

Because they lived it, the creators of Grease understood that wild, thrilling, disorienting moment in our cultural history, that brief window in the mid-20th century when death and despair were not hanging over America's collective head, after the tumult of the Depression, two World Wars, and the Korean War – and before Vietnam, race riots, Watergate, and the energy crisis. This was a very special, very rich time in America that created some of the most influential culture in the history of the world.