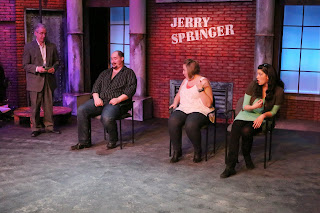 “Director Scott Miller's take on the lowbrow show lives up to the promise in both halves of its name. There are Springer's startling revelations, dirty secrets and white-trash fights, but in the play, this human misery is actually a battle for the soul of mankind played out across Earth and Hell (with a special guest appearance from God). Richard Wagner himself would high-five Springer after witnessing the audacity of this production, which is both hilarious and surprising in its gravity.” – Paul Friswold, The Riverfront Times

“With Jerry Springer: The Opera, New Line brings us the St. Louis premiere of a musical that has actually achieved a modicum of success, but it's not a choice that you're likely to find anywhere else in this region due to its adult nature and content. New Line is dedicated to taking those kind of risks. And, I'm so glad they are, because I love seeing presentations that push the envelope, especially when they're done so brilliantly. . . I really loved this show, and I think you should see it. It has a kind of artistic 'shock value' that you won't find anywhere else.” – Chris Gibson, BroadwayWorld

“A few weeks ago, I asked Scott Miller what was redemptive about Jerry Springer. Now, that I've seen it, I can say 'just about everything.' And yet this play about the human condition made me laugh more than I've ever laughed in a theater before. And I'll never again hear the F-word without imagining an operatic delivery!” – Nancy Fowler, KWMU

“Superficially, of course, this show belongs on a shelf in a 'place of honor' with John Waters' outrageous Pink Flamingos and its competition to be named 'the filthiest person in the world'. . . . But look a little deeper and you'll find something enduringly beautiful and simple also running through, in structure and style. Because there may be a river leading back to Thornton Wilder's Our Town underneath it all. . . John Waters would be proud. So would Thornton Wilder." – Richard Green, TalkinBroadway

“With a sure hand and acerbic wit, New Line Theatre's artistic director Scott Miller once again stages a thoroughly enjoyable evening of musical entertainment and humor. . . The guests and audience members handle the vocal gymnastics of opera well. . . Their interpretations were uninhibited and their songs and interactions delightfully energetic, with chaotically choreographed numbers and unexpected quiet moments that added brief introspection to the exhibitionistic spectacle on stage. . . a quality production with strong direction and spot-on performances, and I applaud the company for the bold and daring theater they produce.” – Tina Farmer, KDHX

“For those who aren't squeamish about such depravity -- especially set to music -- it’s a joy ride that keeps you laughing and gasping throughout the three acts. There’s even a moral or two of sorts.” – Steve Allen, Stagedoor St. Louis

“While this isn't a musical for the faint-hearted, honestly, there is something disarming and inherently funny about the pairing of operatic music with dirty lyrics, and with this ensemble, under Scott Miller's zestful direction, the emotion churning below the surface of these outrageous stories goes a long way in making the profane more palatable. . . these people aren't freaks. They're all yearning for their Jerry Springer Moment -- bigger than life characters that get bigger than life numbers.” – Andrea Torrence, St. Louis Theatre Snob 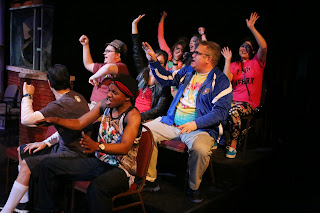 "In St. Louis, there’s only one theatre and one director that I can think of with the audacity to even attempt to do this nutty show: Scott Miller’s New Line Theatre. As usual, his troop of fine thespians is not shy about performing edgy material. If you blanch at Avenue Q’s full frontal puppet sex and masturbation songs or feel ill at ease with the irreverent humor of The Book of Mormon, then I’d encourage you to get your fix of operatic theatre at the Fox this weekend. If, however, you like your theatre bold, if you’re the type of person who stretches their neck to see the body when you pass a car wreck, or if you have a peculiar predilection for adult diapers, Jerry Springer: The Opera is for you. . . New Line Theatre’s production of Richard Thomas and Stewart Lee’s Jerry Springer: The Opera was filthy fun. It’s also completely uncensored. You have been warned." – Jeff Ritter, Critical Blast

“Jerry Springer: The Opera, which makes The Book of Mormon look like Kiss Me, Kate, is not for everybody. It is in fact the most vulgar musical I have ever seen. That’s not a knock, though, merely a description. Director Scott Miller and his cast roll in the gutter with unbridled zeal, singing about infidelity, the Ku Klux Klan and, oh, yeah, 'adult babies' who choose to wear diapers. . . The combination of outrageous staging, foul language, and stabs at religion shove Jerry Springer the Opera to the edge of musical theater.” – Judith Newmark, St. Louis Post-Dispatch

“There's mention of sex, of course, in multitudinous variations, and other bodily functions, addictions, strange personal, uh, preferences, and antiestablishmentarianism, both political and theological. It's a veritable encyclopedia of offensiveness. What fun! The opening is a choral work, beautiful music, exquisitely sung. Then one begins to pay attention to the lyrics, and there's the contrast. . . Another trait of Miller is his seeming habit of casting gifted singers even though they don't resemble television anchors. This reflection of real life is one of his most endearing qualities, and this show is a great example of how that benefits the audience.” – Ann Pollack, St. Louis Eats and Drinks

“What New Line’s rendition does have is a number of performers whose strong, crystalline clear voices adapt well to an operatic style on the many clever arias written by the composers. . . Jerry Springer: The Opera is juvenile, rude, crude and lewd, but also a lot of fun.” – Mark Bretz, Ladue News

“This modern work is as cheeky as John Waters’ film canon, and as tawdry as the sleaziest current reality shows. Copiously laced with profanity, the show gleefully shocks and offends. If you are a Judgy McJudgerson, stay away. If you are adventurous, can withstand swear words, and appreciate the fearlessness of the New Line regulars, it can be an interesting night of theater. . . Co-directors Scott Miller and Mike Dowdy swiftly move the piece, maintaining the high jinks spirit and allowing the characters to have their moments of infamy. In turn, the tight cast immerse themselves in this gaudy, bold show. They all have a blast, and want us to be entertained by the shenanigans. They follow Jerry’s advice: Take care of each other.” – Lynn Venhaus, Belleville News-Democrat 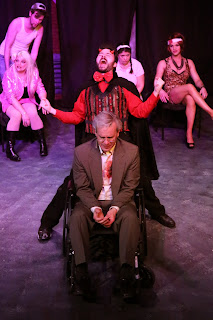 TV Guide once called The Jerry Springer Show the worst show in the history of television. Critic Janice Kaplan wrote in TV Guide that coming on television to tell one’s secret is like “defecating in public.” I'm sure lots of people (most of whom have never seen Springer) would agree. But then why has the show been on the air for more than two decades, to such consistently strong ratings?

It's easy to smile smugly and conclude America is just stupid. Talk show host Sally Jesse Raphael famously said, “Nobody wants to watch anything that’s smarmy or tabloid or silly or unseemly – except the audience.”

But America isn't stupid. A big part of the appeal is that humans crave narrative. It's how we learn, how we preserve our history and culture, how we share experiences, how we explain ideas, and how we entertain ourselves. Narrative is the primary form of human communication, and the most universal is the narrative of a human life. The Jerry Springer Show offers up two or three narratives every day, human hero myths in miniature. And in those stories, no matter how outrageous (and no matter whether we think the stories are 100% true or not), we see ourselves, because we recognize universal human themes – love, loss, betrayal, lust, revenge, humiliation, despair, triumph, joy. We've all felt these things, though maybe (hopefully) not to the extreme degree we see on Springer.

The Jerry Springer Show offers us what Bat Boy, Little Shop of Horrors, Cry-Baby, and Urinetown offer us, exaggerated but truthful human behavior under a magnifying glass. But the exaggeration doesn't obscure the truthful. And notice that, like Springer, all the shows I mentioned are about the Other, the outcasts, the misfits. As Elayne Rapping wrote in The Progressive, “The people on these shows are an emotional vanguard, blowing the lid off the idea that America is anything like the place Ronald Reagan pretended to live in.” 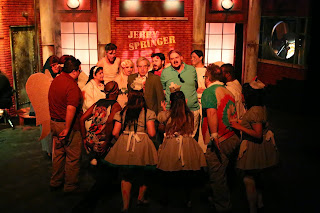 So what's the Big Picture point of Jerry Springer the Opera? Why did Richard Thomas and Stewart Lee write this wildly unique show? It's clearly more than just an elaborate goof. There's genuine weight tucked away amidst the obscene, high-energy lunacy.

At one point in Act II, Baby Jane tries to save Jerry by saying, “Jerry is not to blame. With or without Jerry's show, we'd all end up the same. Jerry did not make it so. He merely holds a mirror to it.”

It’s a legitimate argument, right? Does Jerry create that culture or just pander to it? Or is it some of both? The mistake is to think that Jerry controls his guests and his show; the real Jerry would be the first to admit he's just a ringmaster, not God.

As you can see, though Jerry Springer the Opera is insanely funny and outrageous, and incredibly vulgar, it's also a whole lot more than that. And that's really cool.