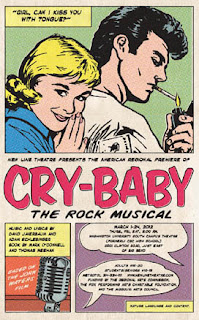 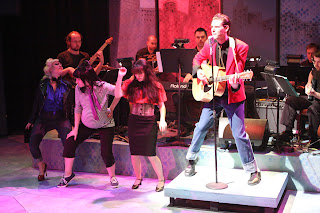 “If you liked New Line’s productions of Return to the Forbidden Planet and Bat Boy, or if you just want to have a great time, then pick up tickets for its latest giddy extravaganza, Cry-Baby. You'll laugh too hard to catch all the hilarious lyrics. . . In fact, the whole ensemble captures the go-for-broke spirit that Miller, band leader Justin Smolik and choreographer Robin Michelle Berger relish. . . Now in its 21st season, New Line also stages serious musicals: Evita, Love Kills, Kiss of the Spider Woman and many more. And it stages them beautifully, albeit with unexpected twists. But Miller's intimate musical comedies have a distinctive charm all their own, part sketch comedy, part witty spoofs of musical-theater tradition. They don't come up that often, but when they do, they last a long time in memory.” – Judith Newmark, St. Louis Post-Dispatch

“I couldn't stop smiling and laughing through this stage-musical version of John Waters’ film, though I have to admit I never really tried. From the opening chords, which (of course) sound like some 1950s movie about teen rebels, we know we're in for a counter-cultural extravaganza. Long and lanky Ryan Foizey is fantastic as a pacifist Elvis Presley in red-scare America, and director Scott Miller and crew surround him with a cast that bristles with talent and dance that crackles with excitement.” – Richard Green, TalkinBroadway.com

“Cry-Baby is a smash, a musical and cultural send up of drape and square mores, while at the same time, a parody of the typical ‘boy meets girl, boy loses girl, boy gets girl back’ scenarios that we've all been exposed to in more traditional shows. At times, it’s like watching a throwdown between Little Richard and Pat Boone over who really sings ‘Good Golly, Miss Molly’ the best and most authentic. . . Scott Miller and New Line Theatre have once again given us something outside the norm, and it's a joyous ride. This revision of Cry-Baby is a sheer delight, full of characters and situations from the movie by filmmaker John Waters, but also standing on its own with a clever and hilarious score (music and lyrics by David Javerbaum and Adam Schlesinger), having jettisoned the tunes from the film itself. Go see this play now. It’s wonderfully directed, smartly choreographed, and marvelously acted. . . This is a rave because this a rockin’ good show! Go see Cry-Baby and enjoy!” – Chris Gibson, BroadwayWorld

Four and half stars out of five. “A glorious and infectious American regional premiere by New Line Theatre. Under Miller’s devoted and painstaking direction, this Cry-Baby rocks the room with an effervescent energy, exploding across the stage through an array of dazzling moves choreographed by Robin Michelle Berger. . . Miller has a penchant for mining rare musical gems and, sometimes, resuscitating them from their moribund beginnings. Such is the case with this Cry-Baby, which will leave you shedding only tears of laughter.” – Mark Bretz, Ladue News

Three and a half stars our of four. “There’s an enthusiasm and energetic playfulness in New Line Theatre’s production of Cry-Baby that evokes some very clever laughs and lots of nostalgic friskiness. It’s a hallmark of the kind of amicably provocative show New Line likes to produce. . . Scott Miller has developed an enjoyable niche for his theater that is unique, important and always fun.” – Harry Hamm, KMOX

“Under Scott Miller's bull's-eye direction, Cry-Baby is bolstered by New Line's consistently energetic cast, including newcomer Ryan Foizey in the title role.  His charismatic Elvis Presley inspired Cry-Baby has just enough seeming volatility to make him seem dangerous, but all the heart to make him genuine.  Doesn't hurt that he has a great voice, too.” – St. Louis Theatre Snob

“Scott Miller directs stylishly. . . Miller’s direction and the cast’s talent make it a fine diversion, something to see if you need a break from preparing your taxes.” – Joe Pollack, St. Louis Eats and Drinks 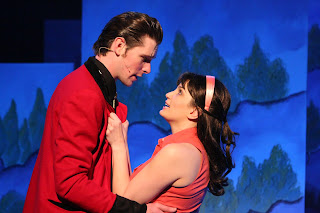 As we began work on Cry-Baby, we realized how misguided the original Broadway production was. This show is not old-school musical comedy, as the original creative staff seemed to think; and the fact that it isn’t is one of its central devices.

Cry-Baby starts off as a full-throttle 1950s musical comedy – the populist art form of the story’s period – but the opening number is not even allowed to end before the Drapes (the “bad” kids) invade not just the picnic, but the show itself. They assault this 1950s musical comedy world with rock and roll, transforming this musical comedy into a rock musical. And the two forms war with each other for the rest of the show, with Baldwin and his Whiffles living and singing musical comedy, but slowly losing their turf to the rock musical world of the Drapes. And Allison, having to choose between the Squares and the Drapes, has one foot in each musical world during much of the show. It’s not hard to guess that by the end of the show, everybody will be singing rock and roll. Just as it did in the real world, rock and roll must supplant the old-school show tune.

What’s wonderful about this score is that songwriters David Javerbaum and Adam Schlesinger absolutely nail both styles. The show’s opening number, “The Anti-Polio Picnic,” sounds like it came right out of the score for Kiss Me, Kate or Finian’s Rainbow. But when Javerbaum and Schlesinger interrupt that song to turn to the raw rockabilly of “Watch Your Ass,” it’s just as authentic.

I invented a new label recently that fits Cry-Baby perfectly: “neo-musical comedy.” It’s traditional, 1950s musical comedy, but with a self-aware irony on top that the older shows didn’t have. Other examples include some of my all-time favorite shows: Bat Boy (the masterpiece of this new form), Urinetown, Lysistrata Jones, Spelling Bee, Bloody Bloody Andrew Jackson; and there are even a few prototypical examples further back in history that pretty much fit the mold, like The Cradle Will Rock, Of Thee I Sing, How to Succeed, and Return to the Forbidden Planet. In shows like this, there are always two layers operating at once. These neo musical comedies use the style and devices of musical comedy and the socio-political content and Brechtian devices of the concept musical developed by Stephen Sondheim, Hal Prince, Bob Fosse, and Kander and Ebb. It makes for a heady mix, more complex than its precursors, more ambiguous, and therefore, more interesting and more adventurous.

Like most well-made theatre, Cry-Baby may be set firmly in 1954 but it’s really about our screwed up world today. The show implies far more than it ever says outright, and it asks from the audience active participation in teasing out the contradictions and implications of what we see. What’s actually on stage is only half the picture. And that’s a big part of the fun here.

Cry-Baby delivers a message parallel to the message of Hair, that we Americans have yet to solve so many big problems that have been with us for so long. Even though that message might seem a bit depressing, with Cry-Baby we’re laughing too hard to notice...