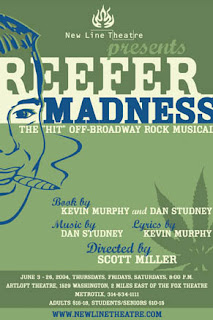 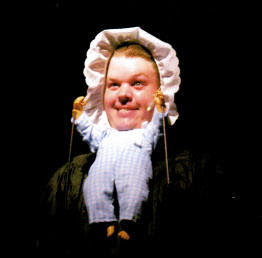 “The New Line cast is bursting with energy and talent. . . the excellent band and the bright performances will ensure that you’ll have a high old hoot of a time at New Line’s Reefer Madness.” – Steve Callahan, KDHX-FM

“New Line Artistic Director Scott Miller has a reputation in St. Louis for taking chances with unconventional shows. Witness New Line’s production of Batboy: The Musical last season. He comes up swinging again with Reefer Madness, the rock musical based on the 1936 government scare-film of the same name. . . As with most New Line Theatre shows, Scott Miller has a point to make, and Miller gets his point across wonderfully with this production.” – Tyson Blanquart, Playback St. Louis
“New Line Theatre’s production is an amusing, tongue-in-cheek treat under the clever, droll direction of Scott Miller. The music to Reefer Madness has an ingratiating and appealing quality, with clever lyrics by Kevin Murphy and plenty of upbeat music by Dan Studney, both of whom collaborated on the book.” – Mark Bretz, Ladue News

Of course, the title doesn’t just refer to the “madness” that the myths say comes from pot, but also the “madness” in mainstream America which swirls around the drug problem, making it impossible to solve or even discuss rationally. It’s true that many Americans are genuinely addicted to dangerous drugs, but America, as a society and as a government, continues to react to this problem so hysterically and so irrationally that real solutions are impossible.

And that’s what this show is laughing at.

People have been using marijuana and hashish, both products of the cannabis plant, all over the world for thousands of years. Some anthropologists believe cannabis was the first crop humans ever cultivated. Cannabis is a weed that grows everywhere on Earth except the Arctic Circle. Evidence of the cultivation of marijuana reaches back as far as 2737 B.C. China. In 2300 B.C., the Chinese emperor and physician Shen Nung first recorded the use of cannabis for medicinal purposes. It has been used recreationally as far back as 1000 B.C.

But in America, throughout the twentieth century and now into the twenty-first, drugs laws have been made and used to control minority populations more so than to solve any drug problem. Originally, the first anti-marijuana laws in America were quite openly designed to rid America of the “problem” of Mexican workers who had immigrated to the U.S. Later the target was black jazz musicians, then the Beats, then the hippies, then rock musicians and their fans, now the hip-hop community. America’s jails are clogged with non-violent drug offenders. America’s War on Drugs has failed, mainly because the people running that war don’t understand what or why they’re fighting.

Study after study – most commissioned by the government – has proven conclusively that marijuana is not addictive, that it is not dangerous (in fact, it’s far less dangerous than alcohol or tobacco), and that it is not a “gateway drug” leading to other drug use. In fact, to this day, no violent crime in America has ever been linked to marijuana. Ever. Some of these studies concluded that the laws against marijuana are more dangerous and more the cause of violence and crime than the drug itself. Of course, many of those studies were silenced or destroyed by the very people who commissioned them because of their conclusions.

As rational, responsible citizens, we have to ask some questions about America’s ubiquitous War on Drugs: Do we really know that marijuana is part of the “drug problem” in America? Who is telling us this and can we trust them? Have they lied to us before? Is this just like Prohibition, and weren’t lots of people needlessly killed when alcohol was criminalized and went underground? Did we not learn our lesson during Prohibition about criminalizing pleasure in the United States? Have we ever seen that work? And most importantly, should the American government really be waging “war” on its own citizens?

Reefer Madness exposes the hysteria and insanity that still swirls around America’s perception of recreational drugs. Who knows, you might even change your mind… or yours…. or YOURS!