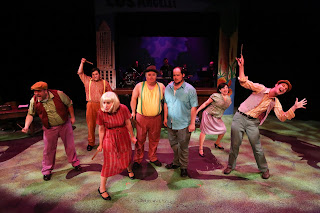 "Let's hear it for the risk takers, for those who embrace originality, for entertainers who want to give audiences something different. Want to raise your eyebrows, laugh out loud and marvel at the chutzpah of creative minds? Fit the bold, brazen – and bewitching – Bukowsical into your schedule at New Line Theater during the next two weekends. . . it's unlike anything you have ever seen." – Lynn Venhaus, Belleville News-Democrat

“I can't remember a show that ever creeped me out as much as it made me laugh. In fact, at the risk of sounding like a critic, I'll say that if you liked Book of Mormon, you'll love Bukowsical. In its own deeply personal style, it's just that great. It's that sensibility that says 'life is gross and people are mad, and any intelligent decision you may possibly dare to make will always be destroyed by corrupt authority figures so you might as well just jump on board the Hell-bound train and get it over with.' Plus, it's really funny and outrageous.” – Richard Green, TalkinBroadway

“For twenty-two years Scott Miller and his New Line company have been zapping the St. Louis musical theatre scene with bolts of energy. Off-beat, eccentric, sometimes dark, often hilarious, occasionally outrageous and always fresh, New Line productions are for folks who have accepted the fact that Rogers and Hammerstein are actually dead. . . Folks will either see it as one of the most outrageously funny things ever staged, or it will offend every sense. (Or possibly both.)” – Steve Callahan, KDHX

“Scott Miller and his New Line Theatre never back down. Has a musical been a quick flop on or off Broadway? He’ll make it a hit and suddenly regional theatres are salivating to produce it. Is a musical considered too 'out of the mainstream?' No problem, let’s give our audiences a choice and see what happens. Is this one too rude, crude and obnoxious? Let’s do it! And now, combining all three of the above theatrical no-no’s, New Line presents Bukowsical, the musical.” – Steve Allen, Stage Door St. Louis

“New Line Theatre's production captures this drunken genius in all his splendor. You may be shocked by what you see or hear, but I guarantee you won't forget it. This is cutting edge theatre at its finest. . . Bukowsical is a rude crude, raucous, offensive and delicious musical that treads the line between biography and satire. New Line Theatre's production is an absolute blast. Go see it immediately!” – Chris Gibson, BroadwayWorld

“Bukowsical is not for everyone. But if you are a fan of shows like The Book of Mormon, or Avenue Q, there shouldn’t be anything you can’t handle. New Line Theatre does what it does best, putting on a raw and uncensored show that never pulls any of its punches. With a fantastic cast, non-stop laughs, and many memorable songs – 'you can be Bukowsical too.' And you should.” – Kevin Brackett, ReviewSTL

“Bukowsical riffs on the life and work of Bukowski in the form of a wild musical bursting with simulated sex, four-letter words, and clever lyrics. It's the perfect piece of theater for a sophisticated urban crowd looking for pure ribaldry on a Saturday night. . . This is the sort of goofy, lead-with-your-pelvis, sharp late-night comedy that’s perfect for a city with a thriving, risk-taking alt-theatre scene, like Chicago or New York. We’d like more of this brand, please.” – Byron Kerman, St. Louis Magazine 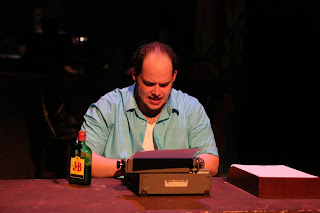 “Musical theater has changed a lot since Bukowski came on the scene. Now 'Love Is a Dog from Hell' is actually the title of a song – and its author is the subject of the smoky, clever, amazingly foul-mouthed show at New Line Theatre. Its often-cheery homage to traditional styles darkens this show's material. From the ironic title to the hot little combo headed by Justin Smolik to choreographer Robin Michelle Berger's stylish ensemble work, this production was plainly the work of people who know musical theater.” – Judith Newmark, St. Louis Post-Dispatch

“This musical not only sheds considerable light on what went into making Charles Bukowski the artist he was, it also satirizes the conventions of musical theatre. It defies tradition by packaging foul lyrics about slimy behavior in these irresistibly tuneful, upbeat little songs. Under Miller's clear-sighted direction, the entire cast passionately embrace all kick-lines, key changes, and every instance of 'jazz hands.' Seeing these supposedly contradictory elements combined with such enthusiasm is what makes it so funny. The profanity may offend your sensibilities, but with everything else this show has to offer, I bet you'll get over it after about 4 minutes.” – Andrea Torrence, St. Louis Theatre Snob

“It’s definitely not family material and absolutely full of mirth and mayhem in equal doses. New Line artistic director Scott Miller and his notably energetic and fun-loving troupe make Bukowsical an evening you won’t soon forget and may actually enjoy quite a bit. . . Miller’s pace is brisk and witty, the action is amusing, the banter is brittle and the music direction by Justin Smolik is perfectly in sync with the performers. . . New Line’s presentation of Bukowsical captures the musical’s surprisingly engaging blend of sass and sweetness.” – Mark Bretz, Ladue News

“New Line Theatre Director Scott Miller never shies away from challenging material, whether it be darkly tragic like Next To Normal or hilariously over-the-top like Bloody Bloody Andrew Jackson. Bukowsical definitely falls into the latter category. . . Even the shocked first-time attendees were tapping their toes, laughing and clapping with each tragically absurd scene.” – Jeff Ritter, The Trades 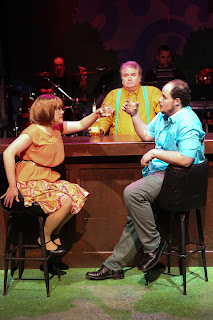 There are a lot of very funny musicals, even more of them lately, now that we've moved away from the bombast of the 1980s British Invasion (of the musical theatre), and back toward the original form of the American musical – the musical comedy. These “neo musical comedies” (Bukowsical, Cry-Baby, Spelling Bee, Shrek, Avenue Q, Lysistrata Jones) are more self-aware, more political, more ironic, and often more vulgar than their ancestors, but they still capture the joy, the chaos, and the muscle of those classic musical comedies. It's a perfect blend – a uniquely American blend – of innocence and irony, idealism and cynicism.

Maybe the funniest aspect of Bukowsical is its perversely good-natured, sunny tone. This is not Bat Boy or Urinetown. This is Anything Goes and No, No, Nanette, but with the irony turned up to eleven and a chronic case of Tourette’s Syndrome.

The musical comedy has always had this kinetic tension driving it, but it used to lean more toward the innocence and idealism, and today it leans more toward the irony and cynicism, to match the zeitgeist. The mega-musicals of the 80s began to wither away in the ironic 1990s and 2000s, under the weight of way too much earnestness. Miranda Lundskaer-Nielsen wrote in her book, Directors and the New Musical Drama, “Rather than finding order through chaos, or offering the sense of resolution that even the more political Broadway musicals often give their audiences, some newer shows imply that emotional confusion is a reasonable response to the contemporary world. Just as social playwrights have been doing for years, today's musical writers choose to raise more questions than they answer, and to reflect the world around them rather than trying to interpret it through a simplistic lens.”

In many ways, Bukowsical and the others are a 21st-century reboot of the American musical comedy. There is a self-awareness and a fierce defiance about these shows. They subscribe to no hard-and-fast rules. Broadway composer-lyricist William Finn (Spelling Bee, A New Brain, Falsettos) says, “Musicalizing something inherently nonmusical seems a very dramatic action – arrogant, humorous, whimsical, yet serious. It says, ‘We are in the business of making the world sing.’ It's almost revolutionary.”

We won’t make you comfortable tonight, but we will entertain you.
0 comments