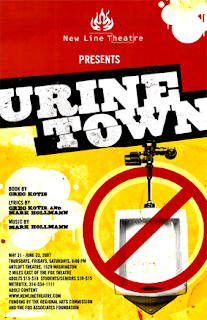 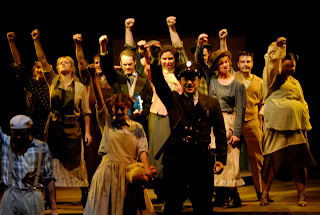 “An exhilarating, don’t-miss experience. . . Urinetown plays like a tale of class warfare as performed by the Marx Brothers, and [director Scott] Miller doesn’t let politics get in the way of the laughs. The cast is first-rate, and Robin Michelle Berger’s choreography is gloriously in step with the story. So put your pennies together for the funniest, most tuneful show in town.” – Calvin Wilson, St. Louis Post-Dispatch

“If you ever take a reviewer’s advice, let this be it: GO SEE THIS PLAY. Seriously. . . I have enjoyed quite a bit of theatre over the years and this is in the top 10.” – Kirsten Wylder, KDHX-FM 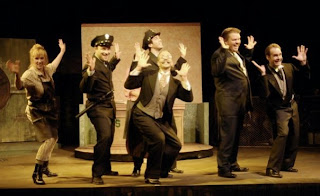 What is Urinetown? It’s an anti-musical, a musical that pretends to operate on the Rodgers and Hammerstein model but instead tears that model apart. Every rule of the classic “integrated book musical” (shows like My Fair Lady, Oklahoma!, Carousel, Beauty and the Beast, The Full Monty, Wicked) is not just rejected here but actively mocked. And after more than sixty years of that model, isn’t it about time?

In this world of MTV and YouTube, shouldn’t we move forward rather than stand stuck in the conventions of the 1940s? Sure, Rodgers and Hammerstein were groundbreakers in 1943, but this is 2007.

But Urinetown is not just a show that breaks rules; it’s a show about breaking those rules. If this is a show that means to tear down the R&H model and leave it in rubble, then that must be our charge as well. Since it’s our job as theatre artists to understand what the authors meant to say and then figure out the clearest way to say that, that means our production must break the rules of musical theatre as well. As Stephen Sondheim says, Content Dictates Form.

So we ask lots of the same questions we always ask, like “Must the playing space be limited to a stage?” (We think not.) And even beyond those questions, we’ve created staging for this show that purposefully yanks the audience out of the “reality” of the story (whatever that means in the case of Urinetown) and continually reminds them that this is just a show, a fake, that these are just actors. Tonight we do not ask our audience to “suspend disbelief” like other shows do. The constant (and often hilarious) acknowledgement of the artificiality of our performance is utterly forbidden under the old R&H rules, but if you really think about it, this approach is a much more honest one. A show is artificial, after all. The actors aren’t these characters. And by acknowledging all that, we eliminate the Big Lie of the Fourth Wall.

In Urinetown, we’re not trying to lure you into getting emotionally involved with these characters. No, our aim is to get you to sit up and think about what’s happening. You probably won’t get wrapped up in Hope and Bobby’s romance because this show doesn’t care about that; instead you’ll realize how silly the conventions of old-fashioned musicals are, how corrupt the relationship between government and business is, how foolish and selfish The People can be, and how overly seriously we all tend to take ourselves in the Grand Scheme of Things.

This show works on so many levels at once – as comedy, as love story, as political theatre, parody, deconstruction. But the real surprise and joy of Urinetown is that the authors aren’t just smartass comedians; they are also supremely talented theatre writers with something interesting to say about how we tell our stories, how we record our world.

Some people won’t like our approach. They’ll wish they were seeing The Pajama Game at the Muny. (Then again, you did buy a ticket to a show called Urinetown!) But our job isn’t to make the audience comfortable; it’s to give the audience an adventure. And whatever else it may be, we think our Urinetown will be an adventure.