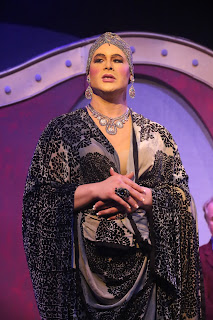 “La Cage aux Folles can be presented as simply a frothy, weightless farce, but here, directors Scott Miller and Mike Dowdy-Windsor opt to show how love deepens over time, which gives their La Cage both weight and depth. That depth burnishes the laughs and sweetens the froth immeasurably. . . It’s no mistake that the strongest family in the show remains the aging gay couple who get their groove back, even as the man who stands for ‘family, morality and tradition’ gets his comeuppance.” – Paul Friswold, The Riverfront Times

“Stylish, spirited and spectacular, La Cage aux Folles is the kind of show at which New Line Theatre excels. Co-directors Scott Miller and Mike Dowdy-Windsor elicit laughs and whip up an atmosphere of barely controlled hysteria without shortchanging the more poignant moments in the book by Harvey Fierstein (Kinky Boots) and music and lyrics by Jerry Herman (Hello, Dolly!). And music director Nicolas Valdez and choreographers Michelle Sauer and Sara Rae Womack are thoroughly in sync with the show’s madcap demands. . . La Cage aux Folles premiered on Broadway in 1983. Decades later, the show continues to thrill and delight – and hasn’t aged a bit.” – Calvin Wilson, St. Louis Post-Dispatch

“This was my first time seeing La Cage aux Folles, and I was blown away. There is so much packed into this show – singing, dancing, romance, humor, emphasis on family and being yourself. And La Cage never ceases to entertain while developing these complex characters and their compelling story. . . Directors Scott Miller and Mike Dowdy-Windsor do what they do best here, which is take an already brilliant show and somehow make it even better. The staging is perfect, with great casting and direction which makes these characters come to life in a lovable and believable fashion. I’ve seen several versions of this story now, but I have certainly found my favorite one at New Line.” – Kevin Brackett, Review STL

“When New Line Theatre sets aside its Sondheim and puts on a bright and florid Jerry Herman show like 1983’s La Cage aux Folles, director Scott Miller’s expertise tempers the entire project – underpinning a delirious drag fantasia with moments that can be heartbreakingly grim, and which are deeply authentic. And by making the lows so resonant, the high moments gain an almost crystalline clarity. Thanks to music director Nicolas Valdez, choreographers Michelle Sauer and Sara Rae Womack, and the back-up singers (Les Cagelles) on stage, La Cage still sings and dances and shrieks like mad.” – Richard Green, TalkinBroadway

“One the one hand, La Cage aux Folles is a celebration of being who you are and finding someone you love enough to want to grow old together, no matter gender or age difference or political background. On the other, it’s a night at a swanky music club, complete with a big band, led by Nicolas Valdez, and belted out show tunes all dressed up in sparkle and big hair. . . .Scott Miller and Mike Dowdy-Windsor keep the focus on delivering entertaining big numbers and touching scenes driven by deep love and affection – both for the show and its quirky, heartwarming characters.” – Tina Farmer, KDHX

“I’ve seen Zachary Farmer in many New Line productions and have always been impressed. His voice is simply sublime: rich and smooth as warm cream, with a power that never seems even to approach its limits. A rather portly, slightly balding gent of middle years, he was perfect six years ago in the role of Charles Bukowski, the drunken derelict ‘poet laureate of low-life’. How could such a man become an icon of real feminine glamour? How could Farmer be ‘Zaza’? Amazingly he triumphs in it! Sensationally gowned and wigged, with quite superb make-up and just a pinch of corsetry, he attains that strong-jawed Joan Crawford beauty – but instead of the hard cruelty of Crawford, Mr. Farmer fills Zaza with deep love and genuine emotion. He’s stunning. He makes La Cage aux Folles belong to Zaza as much as Gypsy belongs to Mama Rose – but unlike Mama Rose, Zaza is a character we can readily love.” – Steve Callahan, BroadwayWorld 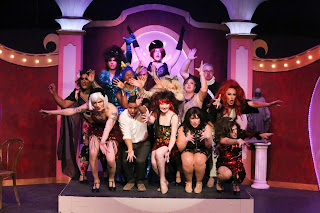 “Years ago, New Line founder and artistic director Scott Miller branded his troupe ‘the bad boy of musical theatre.’ Miller co-directed La Cage aux Folles with Mike Dowdy-Windsor, and in its way it’s just as surprising as some of the more subversive works the troupe has presented: It’s probably the least-queer show in the New Line canon. . . Why see it again? Because New Line’s production at the Marcelle gives La Cage an intimacy that seems just right for a little family story. And because it gives a performer with a lot of New Line fans a role they had never imagined for him. It’s a treat all around.” – Judith Newmark, All the World’s a Stage

“New Line Theatre has staged another remarkable production with their rendition of the modern classic musical La Cage aux Folles. As often happens at New Line, this production distills the essence of the show and brings out its human drama, emphasizing character and relationships, along with the excellent singing that I’ve come to expect from this company. In addition, it’s also sparkly and dazzling, with a strong ensemble and a truly stunning performance from one of New Line’s most recognizable players. . . I hadn’t seen it on stage until New Line brought it to the stage with its usual insightful, inventive style. This is a fun show with a lot of flash, but it’s also a very human show, with poignancy and wit and charm. It’s another winning production from New Line.” – Michelle Kenyon, Snoop’s Theatre Thoughts

“New Line Theatre offers its take on the venerable, Tony Award-winning musical by Harvey Fierstein and Jerry Herman, delivering a crowd-pleasing rendition led by Zachary Allen Farmer in a triumphant performance as the charming and resilient Albin/Zaza. . . La Cage aux Folles can be both naughty and nice. New Line’s presentation, under Miller’s and Mike Dowdy-Windsor’s studied direction, succeeds at both.” – Mark Bretz, Ladue News

“La Cage Aux Folles remains timely, and important, and most importantly, fun. As always, La Cage boldly stands up to hypocrisy, ignorance and self-righteous prigs with sharp social commentary wrapped in light-hearted comedy and hummable music. This delectable confection as a crowd-pleaser is a brilliant offense, and Fierstein’s smart script is redolent with both zingers and heartfelt moments. But this cast emphasizes it with their own perceptible feeling of family, that intangible quality that sells the show, and underlined by the confident directors. . . There is an obvious joy and compassion in this work, and because everyone involved is having such a good time, it carries over to the audience. After all, love is love is love is love. None of us need permission to be who we are, but La Cage Aux Folles reminds us that we are all free to be you and me. And that’s mighty fine any time.” – Lynn Venhaus, St. Louis Limelight 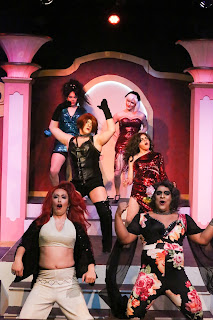 That’s the first lyric in La Cage aux Folles, and though on the surface, it’s talking about drag, it’s saying way more than that. Just like the show it introduces. Those few lines encapsulate the entire story and all its themes.

It’s a statement of purpose.

It introduces us to two ideas that will permeate every moment of the show. First, there’s “we are what we are” – in other words, we accept and embrace ourselves for who we are, without judgment or regret, without wanting to be someone or something else, and we’re not changing. It’s such a declarative statement. Particularly as sung by performers in drag, it’s a statement of defiance and dignity. And that dignity will be greatly challenged throughout this story.

But the second phrase tells something just as important – “and what we are is an illusion.” That’s literally true of the men singing these words (St. Louis male actors playing French male performers playing female characters), but it’s also universally true for all of us. We all wear masks of various kinds in our everyday lives; we all “perform” various roles in our lives. In other words, life’s a drag. This whole show is a deceptively serious story about identity and masks, reality and illusion. Albin is living as a man, performing onstage as a woman, husband to Georges, “mother” to Jean-Michel, tragic diva to Jacob. When Albin shows up at the dinner party, it’s funny to us because we know he’s about to cause all kinds of chaos, but we also register (maybe subconsciously) that this mask is “true.” So is it a deception?

As crazy as it is, Geroges and Albin’s world has an equilibrium as our story begins. It’s a world of crisis and chaos, but it’s also a world of family and ritual and commitment and a weird kind of stability.

People translate the title of La Cage aux Folles in various ways, but the one that seems most right to me is “The Cage of Madwomen.” The word folles is French for crazy or wild, but if you speak French, you’ll notice that it’s the feminine form of the word. And on top of that, folles is also French slang for effeminate gay men. When you know all that, the name of the show – and the name of the club above which the whole story takes place – becomes a slyly subversive, multi-layered joke.

Maybe they’re crazy, but you’ll pay to see them... so who’s really crazy? We all are.