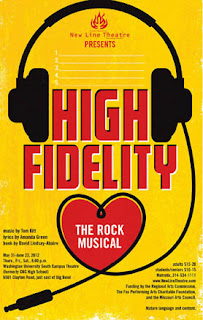 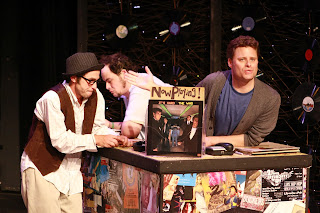 “Earlier this season, New Line Theatre staged two regional premiers: the wry, insightful Passing Strange and the raucous, insightful Cry-Baby. High Fidelity – by turns wry and raucous, and maybe the most insightful of all – makes an inspired conclusion. . . When New Line artistic director Scott Miller first staged High Fidelity on the heels of its Broadway failure, he rescued it from obscurity; it’s gone on to a number of successful productions at colleges and small theaters around the country. This production, also directed by Miller, is a kind of victory lap: a showcase for the musical’s clever songs, endearing characters and above all for the New Line gang. A talented bunch both onstage and behind the scenes, with High Fidelity they once again welcome theater-goers into their smart inner circle.” – Judith Newmark, St. Louis Post-Dispatch

“The Number One reason to see this revival production of High Fidelity: IT ABSOLUTELY ROCKS!” – Chris Gibson, BroadwayWorld

“After four years, and rave reviews from critics, High Fidelity has returned to St. Louis. . . What stands out most about this production of High Fidelity is the passion that went into it. You can tell that these actors are singing and dancing their hearts out; you can feel the raw energy and emotion that they radiate with their performances. I listened to the original cast recording of the show, and I can honestly say that some of the recorded numbers couldn’t hold a candle to the New Line versions. . . High Fidelity is a fantastic show, filled with pure rock energy and a myriad of memorable songs. It would truly have been a tragedy if it wasn’t revived after being left for dead on Broadway. Instead of just taking the movie and slapping some songs into it, the cast and creatives really make it their own. With great performances and powerful rock music that is fondly familiar, it is a must see show that you don’t want to miss.” – Kevin Brackett, ReviewSTL

“As always, Scott Miller’s direction is right on the money. He has found the secret of making this Broadway disappointment into a vehicle for fun and frenzy that you just wish wouldn’t end. . . If you’re ready for flat-out fun, don’t miss this terrific show. It bubbles with personality and just makes you feel good all over. Outstanding performances lead the way and the almost lost score with music by Tom Kitt and lyrics by Amanda Green along with the book by David Lindsay Abaire show that there’s life in any musical as long as it has heart, desire and a little help from Scott Miller.” – Steve Allen, Stage Door St. Louis

“New Line Theatre artistic director Scott Miller saw the beauty and buoyancy behind the weak Broadway effort that introduced High Fidelity as a rock musical in a disappointing effort that folded after just 14 performances on Broadway in late 2006. Miller’s New Line Theatre mounted the first regional presentation in 2008, a glorious triumph that Ladue News cited as the best production of the year. . . Now, New Line has brought High Fidelity back to its greatest success in a presentation that, if anything, is stronger and more engaging than its 2008 predecessor. . . If you love rock music and feel-good stories, High Fidelity should top your charts.” – Mark Bretz, Ladue News 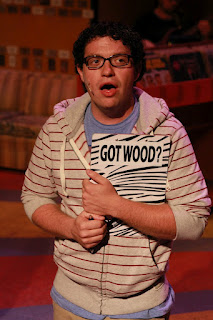 “In true New Line fashion, director Scott Miller pared the show down to what was necessary: the tale of a commitment-shy Gen-Xer struggling, buoyed by his love of music, to grow up and become a human – and by focusing on that, he made the show a hit of the 2008 season. Not resting on his laurels, though, in this production Miller opens up the space a little, allowing musical numbers to joyously jump out at you. . . The newly revived show has lost none of its original verve – in fact you could say this show is ‘re-mastered’ – in its new space, it takes the already clean master material and polishes it further, opening up the stage to let the ‘confessional booth’ tone of this charged rock musical spill out into the laps of the audience and make us question our own behaviors in our relationships, and explore how to forgive and be forgiven. . . So if rockin’ music with a good story is your idea of great entertainment, plan on seeing New Line’s High Fidelity.” – Robert Mitchell, KDHX-FM

“Right now, we can enjoy a second helping of Miller’s take on the show. Once again, the results are dazzling. . .The entire production is proof again that High Fidelity is a musical with a future.” – Gerry Kowarsky, Two on the Aisle

“I was glad to see it again. I think I enjoyed it more this time and got more out of it.” – Bob Wilcox, Two on the Aisle

“If you've ever found salvation in a used-record bin, poured your soul into a mixtape or sunk into deep neurosis over the state of your romantic affairs, there is plenty here to appreciate.” – Mike Appelstein, The Riverfront Times

“Don’t dismiss them as merely regional theater – when a production such as this nails it, Broadway takes notice. Director Scott Miller and his terrific cast have certainly made a believer out of me.” – Jeff Ritter, The Trades

“New Line Theatre has revived High Fidelity after giving this musical its first regional premiere in 2008. Based on the novel by Nick Hornby, High Fidelity suffered a short life on Broadway, but New Line's artistic director, Scott Miller, has a thing about reviving Broadway flops. Seeing the potential and the heart at the center of this rock musical, he and his trusty crew at New Line gave it a new life then, and it's even better this time around. . . .Under Miller's perceptive direction, just about every aspect of the show seems to have been brought up a notch, and Jeffrey M. Wright's portrayal of our hero Rob Gordon (one of many wonderfully reprised roles from 2008) has matured. . . Check it out for some great songs, great performances, and a very good time.” – St. Louis Theatre Snob 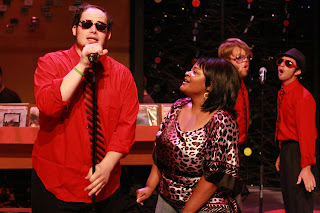 In 2008, New Line Theatre resurrected this amazing piece of rock theatre after a misguided New York production, bad New York reviews, and a very short Broadway run. Its creators thought it was dead. And none of the New York licensing agencies would represent the show, so regional theatres wouldn’t produce it.

But we New Liners saw what was special here, the intelligence and emotion and deep human insight, and so New Line produced the show in 2008 for the first time since its Broadway run, bringing to St. Louis audiences the American regional premiere of High Fidelity. The show got rave reviews here and sold out all but one performance. Soon we were getting requests from other theatres for production rights, so we passed them along to the writers. And now, theatre companies across the country are producing this show. (And we did the same thing with Cry-Baby this season!) Now, finally a licensing agent in New York is licensing High Fidelity.

What could we see that they couldn’t see in New York?

What the Broadway team failed to understand is that High Fidelity is not a musical comedy and it’s not a love story. It’s the story of one guy – a man-child, really – learning to grow up. It’s a classic Hero Myth, like Star Wars and The Wizard of Oz. But in those two stories, the hero takes a physical journey that represents an interior journey. In High Fidelity, we’re on the inside from the get-go. In fact, we spend the entire show inside Rob’s head. But all the same elements are here – the wise wizard (Liz and/or Bruce Springsteen), the magic amulet (rock and roll), the trusty companions (Barry and Dick), and an evil wizard, which in this case is Rob himself, his own worst enemy.

The point is that Rob has to grow up before he can have a satisfying, adult relationship. It’s a journey all of us have gone on or are in the midst of. In Rob’s journey – and in his music – we find the universal human process of continual self discovery and (if we’re lucky) increasing self-awareness. We can see that transformation in Rob’s music and in his relationship to his music.

This is a story about experiencing music autobiographically, about using music to connect to others, about the way it makes your personal pain somehow transcendent – but also about how we can hide from our lives in music (or any art). So what better form in which to tell this story than a rock musical? And what better way to construct the score than in the musical vocabulary and language of these guys’ lives?

This is an original score that delivers dramatically but is also peppered with musical references to some of the great rock and pop artists of our time, the muscular American sound of Bruce Springsteen, the raw rage of Guns N’ Roses, the intellectual playfulness of Talking Heads, the fierce defiance of Aretha Franklin, the smoky groove of Percy Sledge, the driving cynicism of Billy Joel, the naked emotion of Ben Folds. This is a show that uses music as carefully and artfully as it uses dialogue to tell its story, comically, emotionally, often ironically. We hope you enjoy it as much as we do.