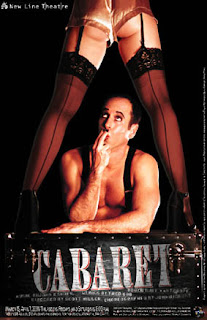 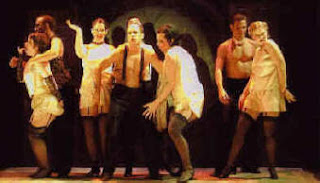 “A small spotlight falls on a door, slightly ajar. A hand reaches out, showing off black-polished nails. The index finger beckons seductively. Then the middle finger signals. With that opening moment, director Scott Miller condenses his entire approach of Cabaret – tempting, vulgar, shrewdly theatrical and admirably economical. It’s one of the most powerful productions that Miller’s company, New Line Theatre, has ever staged. . . [The band’s] raw sound suits the mood that Miller and choreographer JT Ricroft evoke in steamy Klub numbers like ‘Money’ and ‘Two Ladies,’ visually exciting and metaphorically explicit. We’re in a very sick world. . . Christopher Crivelli’s venomous performance as the Kit Kat emcee sets the standard for this show – leering, cold, totally in control. Robin Kelso plays the English star of the club, Sally Bowles, with a lot of flair both in her ‘onstage’ scenes (more pose than talent) and her ‘offstage’ scenes (more pose than heart). Yet her winning, tiny smile, coupled with occasional bursts of warmth, complicates the character. You can’t dismiss her, and you can’t trust her. It’s a provocative combination. . . But the cold heart of the play lies in the Kit Kat Klub ensemble, whose entertainments reveal a morally bereft world-view that still can frighten us. And should.” – Judith Newmark, St. Louis Post-Dispatch

“I’m sitting in the front row of the most remarkable production to hit St. Louis this season. . . We’re close enough that this once familiar musical is transformed into something quite unlike any production of it you may have seen. It’s Cabaret . . And it’s one of the best things I’ve seen the New Line Theatre do. . . Director Scott Miller has made his New Line Theatre a St. Louis institution, and I’m happy to see that it has so vibrantly survived the loss of the St. Marcus. It is very much at home in the Art Loft Theatre on Washington. Besides his deep understanding of musical theatre, Miller’s chief gift, I think, is for the gathering of outstanding talent.” – Steve Callahan, KDHX-FM

“A must-see for anyone who is interested in theatre in St. Louis.” –Gerry Kowarsky, St. Louis Post-Dispatch

“Cabaret, at the New Line Theatre, is a flawed but noteworthy production of the groundbreaking musical, which is as fresh and provocative as it was when it was created in 1966. The production is at its strongest in the musical numbers, all staged deftly on the tiny clublike stage by director Scott Miller and choreographer JT Ricroft. Vocally, the cast is first-rate [and] the band excellent (the accordion is a nice touch). . . In the opening number, ‘Wilkommen,’ the over-rouged, zombielike Kit Kat girls and boys, and their Emcee (Christopher Crivelli) perform enough pelvic thrusts and simulated oral sex for several productions. We’re supposed to be shocked, shocked, but the gestures are so mechanical and contrived that they become boring and meaningless. Perhaps that’s what director Miller intended: Sex has become common currency, as devalued as the German mark.” – Brian Hohlfeld, The Riverfront Times 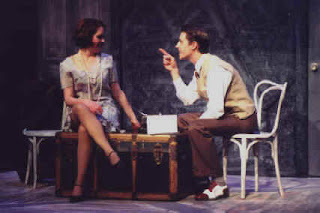 Why is New Line Theatre, a company known for presenting world premieres and St. Louis premieres of new works, producing a thirty-five-year-old musical?

That’s simple. Because it still matters. Because there are some lessons in life so important we must revisit them from time to time.

So what does Cabaret have to teach us in 2001? That it’s not okay to ignore what’s going on around us, that we cannot allow our world to be less than it should be, that we should never keep quiet, that it’s important to participate, that we have a responsibility to each other and to our community, that any discrimination, any indignity, any prejudice, no matter how slight must be brought out into the light of day and condemned.

Would things have been different? I really don’t know.

But there was some moment, some point of no return, when the Germans could have gone down a different road and saved the world from the horrors that should not have been inevitable.

Cabaret is about that moment, a time when it wasn’t yet too late, when Germany wasn’t yet locked into the path that would lead to the murder of millions of Jews. But the people of Germany couldn’t see what we see. They didn’t know how their choices, their fears, their apathy would lead to bigger things. People like Fraulein Schneider and Fraulein Kost were busy just trying to survive. People like Sally Bowles were busy having too good a time.

The extermination of the Jews started small, in tiny, daily indignities, in little, nearly unnoticeable acts of prejudice, in seemingly innocent jokes, in the words people chose. Could the same thing happen today? Of course it could. Right wing political leaders in America today say pretty much the same things the Nazis said about gays, women, family, religion, culture, education, and patriotism. It may not seem dangerous right now, but it didn’t seem dangerous in Germany in 1930 either. 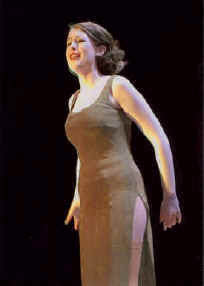 What an incredible experience this was for me. I had the distinct pleasure of being involved with one of the most talented group of people I have ever worked with – their creativity; their openness and responsiveness made Cabaret an event in my life that I will never forget.

I was given the role of the Emcee. It was a role of a lifetime. Now, I am keeping this all in its proper perspective. This is a professional company that uses this small space in downtown St. Louis. This is certainly not the big league. However, given the quality of the production, it very well could have been.

I auditioned for Scott Miller, and all the while I was thinking about Joel Grey in the movie. Mind you, I had not seen the stage revival. I was cast, and soon after, we had our first rehearsal. At that time, JT Ricroft, our choreographer extraordinaire, came to me and said, “In this number (Two Ladies), we would like for you to drop your pants and show your bare butt to the audience. Oh, and you need to grab each other’s crotches in one part of the song as well.” Okay, this was not the Joel Grey Emcee. I think I just entered a new dimension, and I am in for a wild ride. And I was right.

Scott’s vision of this production took all of us into the dark, deep, and seedy side of Berlin in the early 1930s. He opened doors for all of us, digging into our fantasies and stretching us all in body and mind. This was an amazing group of actors that just clicked. The result was an outstanding production which left a lasting impression on us all, one that we will rarely be able to duplicate in our lifetimes.

Scott knows how I feel about him as an artist and as a person. He gave me the ability to create and to stretch myself as an actor beyond what I thought I was able to accomplish. The fulfillment is one that I will keep with me forever. For the past twenty years I had dreamed of playing this role, and Scott allowed this small dream to be realized.

I personally have to thank Scott for his artistry in making this a special experience for me, and I know I can speak for the rest of the cast as well. New Line is a great venue for pushing the limits of theater. And with Scott at the helm, I know the St. Louis audience will experience the very edges of theater for years to come. I can’t wait to be part of the next New Line experience.
-- Christopher Crivelli, “Emcee”

Betsy, the costumer, was at rehearsal to take measurements for the costumes. She entered the room just as we were beginning to run the opening number, “Wilkommen.” I hadn’t seen Betsy in quite some time, so I went over to say hello and tell her how happy I was to see her. I knew she was there for costuming, but she had no idea why I was there. Actually, she thought I was in the show. As the number progressed, I noticed a look of horror on her face. At first I thought she wasn’t feeling well, until she leaned over and asked me a question, somewhat in confidence: “What sick mind created that number?” After showing a guilty grin and feeling satisfied that I had received my first confirmation that the number was going to work, I looked at her and simply smiled. No words were necessary. Ahhh, my work is complete.
– John Ricroft, choreographer

Life is a grope-fest, ol’ chum. That’s right. Grope-fest. I’ve never before been rubbed on, rubbed myself on, and groped so many so often. When J.T. began to teach us the choreography for the opening number, “Wilkommen,” everyone was a little hesitant at first. After a shy crotch grab here, and a nipple tweak there, the awkwardness dissolved. By the end of the run, grinding on someone was second nature. I’ve also never before or since had the pleasure to work with such a talented group of people, across the board. Every single actor with whom I shared the stage had something unique and amazing to bring to the production. The direction, choreography, the band – it was all pretty amazing. From on stage to behind the scenes. And speaking of backstage, one of my favorite backstage antics had to have been the “boy ballet” – Terry would partner Bruce during “Why Should I Wake Up?” It was really quite lovely.
– Stacey Guenther, “Texas”

I remember staging the opening number, “Wilkommen.” I knew I wanted to make a statement during the first few minutes. How can I capture the audience’s attention and accurately portray the decadence of that time and place that’s so important to the story? Simulated Sex on Stage! Yeah, that’s the ticket! So, I asked the chorus to break up into groups of twos and threes, so that we had three clusters around the stage. I then asked each group to come up with three “positions” that would present a graphic picture and I gave them fifteen minutes. During this time, I began to feel concerned about two cast members (Bruce and Steve) who were rather young, and were off on their own. They were talking to each other quietly and looking somewhat confused. I began thinking, would they be able to create something that fit the rest of the group? I went to each group and asked them to strike each position on count. Group 1, GO! Great job! Group 2, GO! Again, perfect. Okay, now it’s Bruce and Steve’s turn to show their stuff (no pun intended). I was fully prepared to witness something that would need some help and be adjusted. I just knew that they weren’t going to be able to come up with something. Group 3, GO! Much to my surprise, they did just fine. All I remember is during the two other groups’ turns at displaying their “acts,” there was tons of laughter and joking. Once Bruce and Steve began, I heard complete silence. The room was speechless and shocked. Mouths were open in amazement. It was perfectly clear that Bruce and Steve knew exactly what they were doing…
-- John Ricroft, choreographer