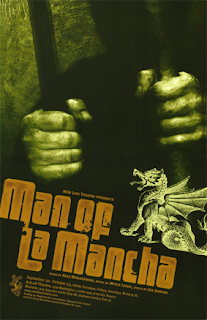 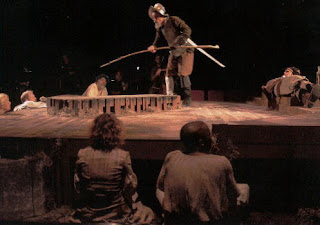 “Man of La Mancha is in the pantheon of stellar shows in the Broadway musical canon. The New Line Theatre production, directed with keen intuition and appropriate reverence by Scott Miller, beautifully underscores the inherent nobility and passion of the work with a masterful presentation.. . a stunning triumph.” – Mark Bretz, Ladue News

“Director Scott Miller and a talented ensemble meaningfully reinterpret for today this stirring hymn to individualism from the experimental theatre movement of nearly forty years ago. . . The entire company’s approach and embodiment of Wasserman’s and Cervantes’ quest for truth in illusion inspires admiration. With Miller’s moving yet focused direction, each performer contributes talent and conviction throughout. . . New Line proves Don Quixote, the Man of La Mancha is not dead, but lives ‘a life worth living’.” – Nancy Crouse, KDHX-FM

“The layers encasing this performance keep the audience at a shrewd distance, though the intimate staging does not. Todd Schaefer [as Quixote] fiddles with the relationship between actor and role and between actor and audience. . . [The] other performers take a similarly intellectual tack. They don’t sweeten the show, visually or vocally. But they keep it honest for two meaty, intermission-free hours.” – Judith Newmark, St. Louis Post-Dispatch

“The show is another hit from one of the most stylistic theater companies in St. Louis. For those out there that tend to shy away from musical theater, I highly recommend this production, as it will remove any ill-conceived notions you may have about the genre, and make you think twice about judging a book by its cover. “ – Tyson Blanquart, Playback St. Louis

“Once it begins to roll, it sweeps like an avalanche. . . a great show in every respect.” – Joe Pollack, KWMU-FM 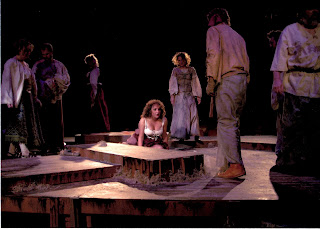 St. Louis theatre has rarely been more political than it is right now, with recent shows like the Repertory Theatre of St. Louis’ The Crucible, ECHO Theatre’s Marat/Sade, and now New Line’s Man of La Mancha. In this election year, it becomes clearer than ever that theatre is a place for our community to come together and discuss the issues of our times. When Man of La Mancha opened in 1965, Life magazine’s critic Tom Prideaux wrote:


It is easy to dismiss this play as sentimental. But in a time when men complain about losing their identity, of being mere cogs and numbers in a computerized world, the spectacle of a rampantly individual Don Quixote is welcome. His constant homage to spiritual ideals touches a chord, especially among the young today who are so earnestly and vociferously finding ideals among political realties. The audience’s tears testify to the achingly human ambivalence of Quixote, who is both a criticism and a defense of man’s idealism. In making us love him and recognize parts of him in ourselves, this absurd but magnificent dreamer has revealed deep truths. He has shown to what an important extent all men can, and must, create their own reality – and how inspiring and dangerous it can be.

You’d almost think Prideaux had written this in 2004, about the new influx of idealistic young people into the political process, and about the human disconnection of our increasingly digitized world. But it’s more than that.

In the last few years, our government has imprisoned American citizens without charge and refused them access to legal counsel or contact with loved ones. Our government now has the power to enter and search our homes without our knowledge or consent. Our government can check our library records to see if they think we’re a threat to national security. Our soldiers have tortured prisoners in foreign prisons.

Man of La Mancha speaks to these times.

This show is not the old-fashioned musical people think it is, and we’re here to prove it. It came from the experimental theatre movement of 1960s New York, and it’s about the disillusionment and forced conformity that so many young people were battling in the sixties, and still today. It’s about fighting for a better world, refusing to let others tell us how to see the world, about rising up against the over-reaching of our government and of religious extremists – both Christian and Muslim – and about changing the world simply by living a moral, engaged, courageous life.

Don Quixote the novel was written in 1615 and Man of La Mancha was written in 1965, but few pieces of theatre are more clearly about our world right now, right here. It is an election year and we must, each of us, stand up and make our voices heard. We hope this show will inspire you to do just that.

Maybe Don Quixote is crazy, but he may also be right.