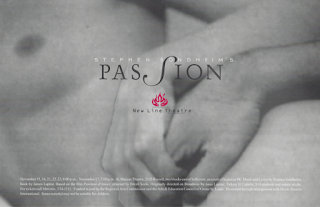 THE REVIEWS
“The New Line Theatre production of Passion is a triumph for director Scott Miller and his company. . . Miller’s cast and crew supply the fervor and understanding required to bring out the haunting melancholy of [James] Lapine’s book and [Stephen] Sondheim’s words and music.” – Gerry Kowarsky, St. Louis Post-Dispatch
“At once outrageous and courageous, Scott Miller’s production . . . has the audacity and insight to strip away the layers of pretension and seriousness that enveloped the original New York production. . . resulting in a wild, bold ride for the audience. Bring a friend, because you’ll have a lot to talk about. . . All involved deserve praise for attacking the difficult assignment with considerable intelligence, honesty, and of course, passion.” – Mike Isaacson, The Riverfront Time

DIRECTOR’S NOTESAt the beginning of Passion, Giorgio and Clara sing:

Just another love story,
That’s what they would claim.
Another simple love story –
Aren't all of them the same?
No, but this is more...

And they're not just referring to themselves. They're also describing the musical Passion itself. It is a love story after all, but it's definitely not like all the rest.

Passion is a tale of deeply felt unconditional love in a world obsessed with physical beauty. It's a profoundly emotional, disturbing story that makes us think about serious issues of love, beauty, passion, and gender roles, even as our hearts break along with Fosca, Giorgio, and Clara.

We were all anxious to work on this show because it's so unlike any other work of the musical theatre. Even for Stephen Sondheim, the greatest rule-breaker working in the art form today, this is still an experiment: his first non-ironic love story. This is not a show in which the authors step back and comment wryly on the follies of love. Instead Passion charges head first into the pain and disorienting passion of love. There is nothing separating us from Fosca and her extreme expressions of love, nor from the raw sexuality of Giorgio and Clara.

The greatest joy for an actor or director is to find material that is utterly real, that accurately represents the hopelessly confusing, conflicting human condition, and Passion is that kind of show. Even the most serious musicals condense characters into clearly defined essences for dramatic purposes. But this is a show whose story works only because the characters are not essences, but are instead fully formed, deeply complex people. None of the decisions and choices made by these people is black and white. None of the characters is wholly good or bad. Everyone populates the gray middle ground of morality, responsibility, loyalty, and self-preservation.

We're all curious to see how you will respond to this show. We think everyone will have a different reaction, that men and women will disagree, that older people and younger people, married and single people, parents and children will disagree. Everyone will bring their own experiences, past loves and losses, past and present obsessions to Fosca, Giorgio, and Clara's story.

We think it will unsettle you a little, but more importantly, move you greatly. Whatever your reaction, we hope you enjoy the show.

REMEMBERING PASSIONWhat an incredible, unique show. The mostly sold out audiences were absolutely spellbound every performance. I've never seen anything like that before or since. It was a very dark, sometimes disturbing yet beautiful two-hour show with no intermission. Then there were the boots. Most of the men had to wear these rented boots that squeaked with every step. When the men made a scene change, there was rhythmic squeaking. When they tried to cross backstage, there were the squeaks. There was no way to stop the boots from making noise. Watching the actors backstage trying to walk without making noise was like being at a contortionists’ convention. Some walked on their toes, others tried walking on their heels, but they all walked as if they were on a tight rope. Nothing worked. It's a good thing the show held the audiences' attention so well; otherwise they would have thought there were “military mice” in the theatre.

The role of Clara in New Line's production of Stephen Sondheim's musical Passion was by far the most erotic role I had experienced and I delighted in it. Believe me, I'd had my share of passionate, scantily clad roles in the past. But the sexual intimacy that Clara and Giorgio expressed onstage, a mere three feet from the first row of the audience, not to mention the attractiveness of my costar, Jim Merlo, was a stirring theatrical experience for me. I remember the night I first kissed Jim. We were doing a publicity photo shoot and Scott suggested that I sit on Jim's lap, in my very sheer nightgown. Jim, God love him, was not wearing a shirt, and he was certainly stirring everyone at the rehearsal – he's one of those guys with perfect chest hair placement and the physique to match. What began as an awkward moment of hesitation turned into scintillating, sensual kissing that seemed to last an eternity. Scott practically had to pull us apart. Many a rehearsal I would lose my way in the lyrics and surrender to the passion of the moment. Men and women alike found Jim appealing; many a man said he was living vicariously through me. Tough luck, guys. Needless to say during performances my professionalism always won out and I ended up thinking about breath (catching my breath, that is!) and vocal technique during our songs together. Little did I know that the following March, Jim would play Marvin to my Trina in March Of The Falsettos and he’d leave me for a man. Ah, the fickleness of men!

During the rehearsal process for Passion, I was having very serious thoughts about quitting acting altogether. This was my second show in six years. I played Doctor Tambourri, and Scott and I were having trouble trying to figure out the doctor’s motivation for doing the things he did in the show. I was also having a great deal of trouble concentrating and learning my lines. I figured I was rusty and that I was getting too old to do shows. It was very frustrating. Then about three weeks before the show opened I discovered the furnace leak in my home. I had no idea carbon monoxide was slowly killing me. I got the furnace fixed. My mind cleared, I learned my lines and Scott and I had some very good conversations about my character that made sense and helped. In the end I didn't quit theatre, although Scott and others keep begging me to.

I don’t know if I’ve ever worked on a more beautiful, more lush, more thrilling score than Passion's. To live in that music for two months was utterly overwhelming and exhilarating. It may well be the most beautiful music anyone has ever written for the stage. And the story of Passion, again so utterly overwhelming, so disturbing, so shattering, completely absorbed me. It was all I could think about, not only during the process, but for months after we closed. And then there’s our cast – a brilliant, dedicated cast that captured perfectly the pain and beauty and obsession and danger of this dark, scary, soulful tale. There was no greater thrill than watching Laura, Deborah, and Jim, and the others tackle this story night after night. From my admittedly biased position, I really believe we went deeper and took more risks than the original production did. And the other thing that made me so proud of this cast is that Passion was one of the most difficult scores we’d ever tackled, and they learned it thoroughly, every note, every rest, every entrance. It occurred to me as we worked on it that the Broadway cast had always had a conductor in front of them cuing every entrance, every difficult passage, but the New Line cast did not have that luxury. Because of the physical intimacy of our shows, there is never a conductor between the actors and the audience. Our actors never had any help in knowing when and where to sing. They had to know the score inside and out, every fascinating twist and turn (and there are a lot!). I asked of them something that had not been asked even of the original Broadway cast, and despite the difficulty, they actually sang it more accurately than the Broadway cast. They sang exactly what Sondheim wrote, and in many cases, with greater depth and meaning because they did not take liberties with Sondheim’s music. Lots of performers have said that every note of a Sondheim score counts, that there is a reason for every note and every rest. Never has that been truer than with Passion, and I will always be exceptionally proud of how true we were to this glorious score