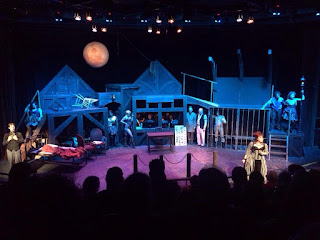 “New Line Theatre presents the show it was created to perform. . . The Threepenny Opera is the oldest show New Line Theatre has ever staged. It might also be the hottest, the sharpest and the best. The moment music director Jeffrey Carter and his sly ensemble begin the overture, a shudder of pleasure rips through the theater. Whether or not you know what’s coming, the music seems to announce, this is going to be an evening to remember. Director Scott Miller founded New Line 24 years ago precisely to do shows like this, shows that squeeze modernity in a ruthless musical vise. Though it’s set in Victorian London and debuted in Weimar Berlin, The Threepenny Opera feels as raw as your butcher’s best – or as an open wound. It’s also very funny.” – Judith Newmark, St. Louis Post-Dispatch

"For the next three weeks you have a choice in how you stay informed about current events: You can either suffer through another local newscast as the tone whiplashes between banal levity and grim images of oppression, crime and human misery -- or you can soak up the horrible truth at New Line Theatre's near-perfect production of The Threepenny Opera." – Paul Friswold, The Riverfront Times

“It very well could be some awful commentary on recent news events that led to riots in St. Louis and New York and Baltimore. But it's also a Threepenny that doesn't seem to give a pfennig or a fig what you think of it. And, you have to admit, that's pretty Brechtian right there. This latest New Line musical is faithful to the original, in that it's very much a haughty celebration of the lowly, who've been failed by life again and again. Then, by adding a snarky, playful vision, the production becomes more like a gleeful victory lap for cause of social liberalism – a modern American show in venerable trappings, that shouts, 'I told you so' to all those who refuse to acknowledge the shoddiness of 150 years of do-it-yourself Reconstruction in the U.S. It's not a hopeless modern black America, of course – but the stage is populated by the utterly bereft (the denizens of London dockyards) who live by their own rules, and avoid the law at all costs. From a director who usually looks backward in time for context, and also revels in the shocking, we now get the biggest shock of all: that this 1928 show, one of the highlights of the German Weimar period, seems to have snapped out of hopelessness and morphed into the first rebellious musical of the 'post-Ferguson' era.” – Richard Green, TalkinBroadway

“New Line Theatre gives us this stage noir classic with all its wickedness intact. It's a pitch-black masterpiece that sucks you in with its nightmarish charms. This is the Marc Bliztstein translation, and I only mention that because there have been numerous attempts at re-imagining the work over the years. New Line Theatre gives us the Brecht/Weill collaboration I've imagined in my mind after only hearing select musical pieces, and watching a fuzzy copy of G.W. Pabst's 1931 film. This is true art, and a show that you absolutely need to see! . . . New Line Theatre has put together a compelling and completely engaging production of The Threepenny Opera. So few have seen in all its dingy glory, and this is your chance to do so.” – Chris Gibson, BroadwayWorld 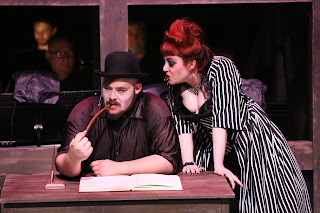 “The granddaddy of dark, decadent musicals, The Threepenny Opera still packs a punch with its biting social commentary that has remained relevant through the ages. The current production being staged by New Line Theatre is fresh, vital and deliciously subversive, underscoring author Bertolt Brecht’s sly observations that crime does indeed pay, whether for a rogue like Macheath or for the pillars of a society that diminishes the humanity of the less fortunate. . . Director Scott Miller’s two-act presentation has a spring in its seditious step that keeps this interpretation amusing and entertaining throughout. The look of the show, with wildly eccentric characters that populate the fringes of the stage, gives it a humorously decadent texture that permeates the performances and accentuates the wry commentary in Brecht’s script.” – Mark Bretz, Ladue News

“A wicked good time . . . Director Scott Miller clearly understands the social commentary, wickedly dry humor, and musical intricacies of the show. His guidance and insight clearly benefit the production, as does his ability to assemble a cast capable of handling the themes and complexity with the appropriate touch.” – Tina Farmer, KDHX

“The best actors in St. Louis, and a top notch band. . . The show was written nearly a century ago, and it may never be more relevant than it is right now. The world's in chaos and it's our fault. Maybe we're all Mack the Knife! The show was great, well acted and sung . . . So if you're looking for a fun yet challenging show, check out New Line's Threepenny Opera. It might just change how you look at life!” – Jeff Ritter, Critical Blast

“The appeal of the piece is its ability to offer a blistering commentary on the evils of unbridled capitalism while retaining a strong sense of humor about itself. While it’s never preachy, the message here is clear – when options are severely limited, the poor and powerless often turn to less than admirable methods to survive. It’s no coincidence that one of the few remotely sympathetic characters is a prostitute who betrays Macheath. The three-act show moves along fairly briskly, in large part due to its talented cast and tight direction. If you seek an evening of dark but entertaining musical theater, this is the show for you.” – Donald Miller, The Telegraph

“Standing on its own, the New Line production flavors The Threepenny Opera with broad comedy and wields its pointed barbs very sharply. . . New Line is challenging us to get up, go out, and do something about the sorry state we see.” – Lynn Venhaus, Belleville News Democrat

“A fine cast all around. . . a 7-piece house band handles the score with élan,. . . Scott Miller's done a good job directing it, and given his love for Stephen Sondheim, perhaps the Sweeney Todd inference isn't accidental. A worthwhile evening.” – Ann Pollack, St. Louis Eats and Drinks

“The Threepenny Opera is a contradiction in several ways. It’s simultaneously comedic and bleak, energetic and gloomy. It’s a story without any real heroes, but where some villains are more villainous than others. It’s a classic that I’d never seen before, and New Line’s latest production has proven to be a memorable introduction. . . New Line’s production brings the show to the St. Louis audience in a vivid and highly accessible way.” – Michelle Kenyon, Snoop’s Theatre Thoughts 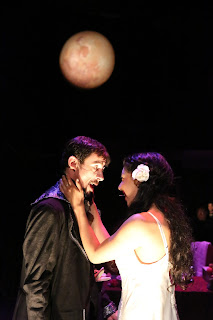 Despite what many people think, audiences do not want escape. More than anything, audiences want truth. They find human connection in that truth.

With most shows – and in particular, most musicals – the idea is to get the audience on the hero’s side, to get them to empathize with the protagonist(s), so that they are emotionally invested in the resolution of the central conflict. But Brecht very intentionally and aggressively steps away from that basic premise of storytelling.

He doesn’t just step away from it. He wrestles it to the ground, takes a shit on it, runs over it with his car, douses it in gasoline, and sets it on fire.

No, we’re putting on a horror show.

In Brecht’s theatre, the idea is to get the audience to recognize a great social truth or problem, and to understand its effects on their lives. Threepenny’s central argument is that it’s not possible to be a moral or decent person, and also survive, in modern capitalism. And let’s be honest, for many people in America today, that is true, or at least nearly true.

In other words, like its descendants, Bat Boy, Chicago, Cabaret, and Urinetown, Threepenny’s agenda is to present a sociological (comic) horror story. It’s Frankenstein, but we are the mad scientist. Instead of zombies robbed of their humanity, these monsters are just regular people, just like you and me, robbed of their humanity. They’re not transformed into monsters by a supervillain or a radioactive spider, but by us, by the society that we are part of.

We are to blame, Brecht is saying. 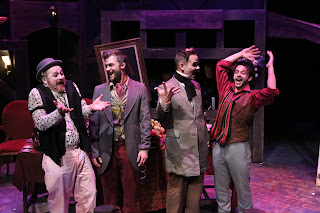 What makes the show most unsettling is that morality is not just subverted here; it is absent. But Brecht and composer Kurt Weill are not asking you to approve; they are asking you to understand. They’re not offering up an excuse; just an explanation. Brecht has created a reverse morality tale, a stark, cautionary fable, but he is serious about his comedy, and he’s arguably right. It’s not a crazy idea that a broken society creates broken people – that’s the central theme of our last two shows, Bonnie & Clyde and Jerry Springer the Opera.

Brecht died in the 1950s but he’s still talking to us. He’s telling us that there is a price to pay for amoral, unfettered capitalism, for wild income inequality, and for an apathetic electorate. Brecht and Elizabeth Warren. He’s telling us that if we don’t want our world to look like Threepenny, we have to act, we have to take power, we have to use our Democracy as it was intended, to work the will of all the people, not just the will of Tiger Brown, the Peachums, and their 2015 counterparts...

Which is why the revivals of Threepenny keep coming. When Mack sings, “So listen closely to Mack the Knife,” he means it.

And we’d better hear him.