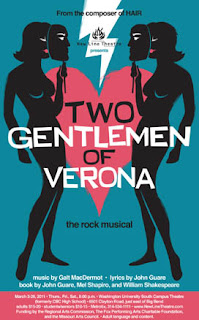 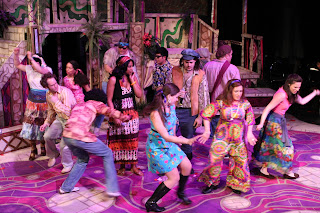 “New Line Theatre’s Two Gentlemen of Verona is an enthusiastic, gutsy, spirited, humorous and totally entertaining show. New Line’s cast is the ultimate in professional silliness. Shakespeare has never been this much fun!” – Harry Hamm, KMOX

“It's a happy romp! It's a silly, illogical, lovely tale! And it's a hit! It's New Line Theatre's immensely enjoyable new offering, the musical comedy version of Two Gentlemen of Verona. . . The New Line cast is uniformly fine. There simply isn't a weak spot. It's full of New Line veterans brimming with talent and with that special kind of family love that Scott Miller has magically fostered in his company over the years. They all perform with such joy and confidence and generosity of heart. . . as a whole package – the show, the cast, the band, the production values – it all makes New Line Theatre's Two Gentlemen of Verona the most purely enjoyable evening of theatre I've had in a long, long time.” – Steve Callahan, KDHX

“New Line Theatre and director Scott Miller's current production of Two Gentlemen of Verona not only rocks, but it's hilarious as well, aided greatly by the spectacular efforts of an enthusiastic cast and a crack band. I honestly can't recall when I've ever witnessed an audience laugh at and enjoy Shakespeare more; the resident Bad Boy of Musical Theatre has come through again. . . I really love the way director/music director Scott Miller makes the most of each comic moment, not milking it, but mining it for the richest results. . . New Line Theatre's production of Two Gentlemen of Verona is brilliantly executed and funny as hell. This terrific presentation continues through March 26.” – Chris Gibson, BroadwayWorld.com

“Director Scott Miller's production just goes to show what you already know: That Shakespeare is so strong, a smart production can take his work in almost any direction, and it will flourish. Just take a look. . . We can identify with unfamiliar times, places or situations when theater artists help us draw fresh, imaginative connections. Miller, who often stages shows that aren't obvious or easy, not only seems to know that's possible, he appreciates how those unsuspected links can pay off in enormous theatrical pleasure. And that's exactly what Two Gents delivers.” – Judith Newmark, St. Louis Post-Dispatch

“This winsome work by MacDermot, Guare and Shapiro is a delightful romp that is much more than the sum of its parts. Scott Miller’s inspired version directed for New Line Theatre features an exuberant and engaging cast that thoroughly enjoys itself and infectiously spreads that fervor throughout its audience. . . With Miller’s flamboyant and spirited approach, though, it’s easy to sit back and enjoy these musical Gentlemen. A 4.5 on a scale of 1-to-5.” – Mark Bretz, The Ladue News 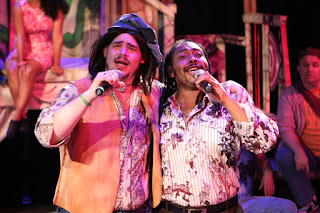 “New Line Theatre pushes the proverbial envelope to dimensions other theatres simply do not. If you want to see a show and feel like you're in New York or Chicago, go see a show at New Line. Go see Two Gentlemen of Verona. It'll be the most fun you have at the theater this year.” – Christopher Reilly, The Patch

“The familiar New Line crew never fails to disappoint, and the ensemble members are always completely engaged and energetic. . . I was struck with how familiar the songs sounded and then I remembered, oh yeah, Galt MacDermot did the music for this. He also composed the music for Hair, and the music for Two Gents is very reminiscent of that (with a little Spanish spice thrown in) – engaging, groovy, and the New Line Band was tight and handled it well. . . After a while, you forget that it's Shakespeare. And I mean that in a good way.” – Andrea Torrence, St. Louis Theatre Snob

“This is one you don’t want to miss. It’s really a piece of history and the infrequency of productions of Two Gentlemen of Verona makes it a true must-see.” – Steve Allen, Java Journal

“Mardi Gras in St. Louis turned cold and blustery, but spring is very much in the air, thanks to this bright, funny, beautiful show. And if you were expecting another New Line musical with a dark, cold edge to it, you'll be very pleasantly surprised by this thoroughly light-hearted adventure. Producer/director Scott Miller must be in love – or, at least, in love with this show.” – Richard Green, TalkinBroadway.com

“It’s like the counter-culture that invaded the musical a few years earlier in Hair has now been integrated into the fabric of society. . . The New Line production is so much fun that no one with the least curiosity about this show should pass up the rare opportunity to see it.” – Gerry Kowarsky, Two on the Aisle

“It's bright and breezy in its current production by New Line Theatre. It opened last night and will run delightfully through March 26. . . Scott Miller's direction is solid, and Robin Michelle Berger did some charming choreography, well-handled by the cast. The acting also is strong. . . a highly enjoyable evening.” – Joe Pollack, St. Louis Eats and Drinks 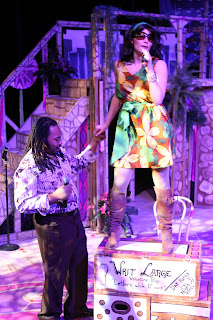 It’s easy to say in hindsight, but maybe Two Gents was the perfect Shakespeare play for the composer of Hair to tackle. After all, this play was Shakespeare’s Rent, youthful, raw, rowdy, messy, rude, and certainly flawed. And composer Jonathan Larson said that he intended Rent to be the new Hair. It’s the flaws that give Hair, Two Gents, and Rent -- and our June show, bare --their rawness and rough edges. They don’t feel manufactured or focus-grouped. They possess that same authenticity that the best, most lasting rock and roll has. The same is true of lots of recent musicals, like Bloody Bloody Andrew Jackson, American Idiot, Love Kills, Passing Strange, and others.

Like the brilliant filmmaker Tim Burton, Shakespeare wasn’t always the best storyteller in the world. He borrowed plots, he relied on improbable coincidences, mistaken identity, and other devices we’d find amateurish in anyone else’s hands. Just as Burton’s real artistry is in his visual language, Shakespeare’s real artistry is in the complex psychology of his characters, maybe even more so than in his amazing language. He was the first theatre writer to delve deep down into the complexities of human emotion and motivation, and he got it so right in most of his plays that we continue to perform them hundreds of years later.

Two Gentlemen of Verona was Shakespeare’s first play, and though he’s not at the top of his game here, he’s still Shakespeare, and that’s enough. The musical’s original director Mel Shapiro and playwright John Guare fixed some of the play’s problems, and together with composer Galt MacDermot, they fashioned a new work, one still very organic to Shakespeare’s play but with a contemporary sensibility that brings this rarely produced work to vivid, modern life. Its 1971 cultural vibe brings so much more complexity and high stakes to the story, adding to the original plot a pregnancy, a decision about abortion, and the Duke’s habit of sending Silvia’s boyfriends not just away, but literally off to “the Vietnam meat grinder,” as they used to call it.

It’s true that Two Gents as a play doesn’t have the artistry or polish of Hamlet or The Tempest, but there is much that’s wonderful here. Critic Paul Friswold wrote about our other Shakespearean rock musical, Return to the Forbidden Planet, “This is no parlor trick of a musical; there’s a rich vein of Shakespeare’s favorite ingredient – the wondrous depths of the human heart – that elevates the show from cunning stunt to artful meditation on the destructive nature of power and the redemptive power of love.” The same is true here.

Our hope with this production is to get back to the original spirit of Shakespeare’s plays – rowdy, sexy, dirty, funny, popular, irreverent, rule-busting, and most of all, deeply, crazily human.