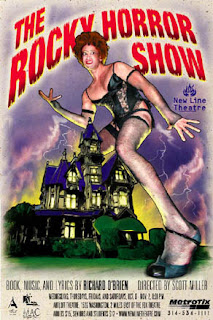 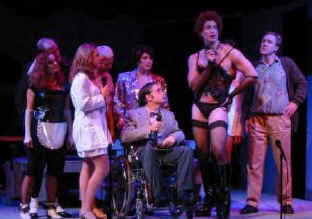 “Rocky reminds us vividly of the emotional power actors can exert when they’re in the same room as their audience, even if they’re kidding around.” – Judith Newmark, St. Louis Post-Dispatch

“When it comes to challenging St. Louis theater audiences, to stretching them, exposing them to new stimuli, hardly anyone is in a class with Scott Miller. . . Rocky Horror will bring much-needed light and laughter to downtown.” – Joe Pollack, KWMU-FM

“Scott Miller directs the New Line production with a grand sense of theater that showcases the campy wit of the musical while still maintaining a necessary discipline to the process.” – Mark Bretz, Laude News 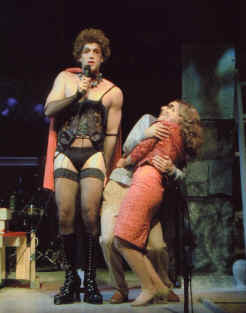 Oh God. Miller’s gonna deconstruct Rocky Horror. I could hear all the New Liners’ thoughts when we announced the show. I even wondered myself if I could write a chapter about Rocky, as I do about all our other shows. Did Rocky have anything in it to write about? And I asked myself – as I expected others would ask me – does it have to be more than just good old-fashioned sex, drugs, and rock and roll? It’s fun, campy, crazy; why ask it to be more than that?

The answer became clear as soon as we started work: Because it is.

To my great surprise, I found that Rocky Horror is a very smart, insightful piece of social satire about a very strange, very interesting time in America – the Sexual Revolution. And it holds lessons for us still today about how America over-reacts to nearly everything that comes down the road, and how much happier we’d all be if we’d just stop doing that.

Rocky uses as its vocabulary a collection of pop culture icons – Charles Atlas and muscle magazines, Frederick’s of Hollywood, old sci-fi movies with scantily clad women, horror movies with barely sublimated sexual fantasies, punk and glam rock with their blurring of gender lines – that represent the history of America hiding sex behind other things, of pretending to be pure and sexless while it’s just as sex obsessed as the rest of the world.

At its core, Rocky Horror is about how America over-reacted to the Sexual Revolution – the Pill, free love, communes, gay rights, wife swapping, sex clubs, and all the other surprises of the sixties and seventies.

Rocky's heroes Brad and Janet embody pre-Pill, pre-Sex Education, American innocence. Their journey dramatizes the fake purity and sex-only-through-metaphor of America in the 1950s, as it met the sexual openness of the 1960s and 70s, resulting partly in renewed repression and fear (Brad) and partly in new sexual freedom and experimentation (Janet). Brad reacts to Frank’s open sexuality the way half of America reacted to the Sexual Revolution, recoiling in fear, retreating into 1950s Puritanism; and Janet reacts as the other half of America reacted, diving head first into the excesses of free love, exploring fearlessly the limits of human sexuality.

Yes, Rocky Horror is more than sex, drugs, and rock and roll. The original stage version was named Best Musical of 1973 in London's Evening Standard annual poll of drama critics, and ran for 2,960 performances. Critic Irving Waddle wrote, “This is theatre made out of the rawest and crudest ingredients, and forming a charge strong enough to obliterate anything standing in its tracks.” Michael Billington wrote in The Guardian, “This show won me over entirely. It achieves the rare feat of being witty and erotic at the same time.” Naseem Khan wrote in The Evening Standard, “O’Brien has created a satirical and affectionate send-up that, unlike Rocky, remains well within control.” The New Statesman wrote, “The intention of course is to celebrate such freaks of pop culture as Hammer films, Alice Cooper, and the sci-fi of Michael Moorcook; and the result has tremendous invention, energy, and glee, right up to the final paean to bisexuality.” The show has since been translated into over a dozen languages and played in more than twenty countries. Maybe it’s not just about America…