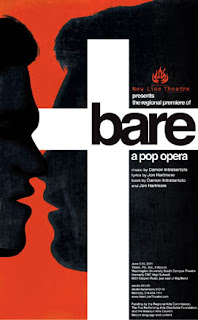 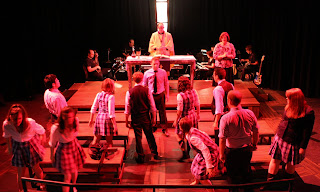 “This month, the truth serum seems to come to us in live theater, in the form of the very entertaining teen-angst musical Bare. . . director Scott Miller draws both actors, and the entire cast, to performances that are strikingly real and compelling, in spite of all the possible pitfalls of the high school drama at hand. It’s another remarkably solid cast for a New Line show. . . Bare is full of great story telling and fun music, rich characters and very fine performances.” – Richard Green, TalkinBroadway.com

“A 4.5 on a scale of 1-to-5. It’s smart, humorous and sophisticated, all elements readily observable in the regional premiere mounted by artistic director Scott Miller in New Line Theatre’s engaging and accessible presentation. . . Miller keeps the production moving briskly while also consistently bringing out the work’s sophistication, including guiding his players successfully through its complicated score. Really, there’s little bare about this rendition past its title. Quite the opposite, it’s an engaging evening of entertainment.” – Mark Bretz, Ladue News

“A Must-See. The 20-foot cross looming over the stage at New Line Theater was ominous, both in the minutes before the show began, and during the production. And it was hard to tell if it was intended to stretch wide, hugging the cast in an embrace, or to stand distant, arms akimbo in rebuke. Such thematic dualism reoccurs throughout Scott Miller’s production of bare.” – Darren Orf, St. Louis Magazine

“Go to New Line and plunge into this sad, dense, haunting pop opera. Yet for all its complexity, it’s emotionally bare. Created by composer Damon Intrabartolo and lyricist Jon Hartmere Jr., bare enjoys a cult following but not the kind of fame associated with, for example, Spring Awakening. But its similar story is equally powerful, conveyed not only by the director Scott Miller and the actors but through Intrabartolo’s romantic pop score, performed with passion by conductor Justin Smolik and the New Line Band. . . bare addresses a wealth of teen problems – substance abuse, pregnancy, questions of sexual identity, teen suicide – but it's no after-school special. It offers no answers, beyond an assertion that honesty is healthy and secrecy can be lethal.” – Judith Newmark, St. Louis Post-Dispatch

“The cast of New Line Theatre's production of bare is strong in terms of both acting and vocals. . . bare is an original show with complicated musical structure. The fine cast is able to produce some unique harmonies and chords that at first sound discordant. It is to their credit and director Scott Miller’s casting that they are able to pull it off. . . bare is a show that explores a myriad of problems facing young people and their struggle to learn from and overcome the obstacles they face. It's definitely a show worth seeing.” – Christopher Reilly, The Patch

“It’s a strong, intelligent, interesting show that has played here and there around the country for more than a decade. This is its St. Louis premiere. . . Given the story and the setting, a number of younger actors (many students at Webster University) got the chance, and there are some splendid performances.” – Joe Pollack, St. Louis Eats and Drinks

“The cast of New Line’s bare brings more power than is probably needed in the small space but the show’s powerful message comes through loud and clear. The cast is a good one and this cult musical makes an impressive local debut. . . It’s all tied together with the great touch of New Line’s artistic director Scott Miller. And the flawless work by the band led by Justin Smolik adds to the lovely evening. . . It’s an adult production with some very provocative scenes and music that may not be to everyone’s taste, but bare really makes for a delightful evening of musical theater.” – Steve Allen, Java Journal 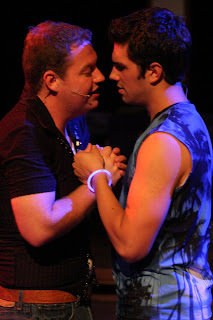 I have been continually blown away by the sophistication, craft, and complexity of the bare score. The harmonic language is so unique, living entirely in the musical vocabulary of pop music and alternative rock, but crafted with a confidence and fearlessness and freshness that is very exciting.

Unlike most conventional musicals, in the bare score phrases aren't always in multiples of four bars; many songs do not end on the tonic chord the way almost all Western music does; there are lots of ambiguous open-fifth chords, missing the note that makes a chord sound either major or minor, happy or sad; and this music often screws around with the rules of harmonic progressions, surprising our ears but never so much that our ears rebel. To the untrained ear, the score sounds like great pop music. To the trained ear, composer Damon Intrabartolo’s music is just as unique and surprising as the music of Bill Finn (Falsettos, Spelling Bee, A New Brain) or Tom Kitt (High Fidelity, Next to Normal).

Structurally, Intrabartolo and lyricist Jon Hartmere use the vocabulary of opera – arias, recitative, leitmotifs and themes, choral work, lots of complex counterpoint – but all within the harmonic and melodic world of American pop and rock. It's a neat trick they’ve pulled off, giving these young characters the right musical voices while giving their drama a powerful underlying musical structure.

But none of this is why bare is so special or why it resonates so powerfully with so many tens of thousands of young people across our country. Perhaps the reason for its power and its popularity is its honesty. Since the 1960s, the true test of rock and roll is authenticity. And bare has that in spades. It is truthful about being young in America at this moment in time like very few other musicals are – with the possible exception of the extraordinary American Idiot. Even at my age, I see myself in almost all these characters and their potent, painful emotions.

A few years ago I was noticing that we were producing fewer specifically gay-themed shows than we had in the past, and I wondered if maybe the gay community had come so far that gay Americans don’t need “gay theatre” the way they did in the 1990s. After all, gay marriage is slowly spreading across the country now, Don’t Ask Don’t Tell is ending, and there are many other positive signs.

But at the same time, every five hours an American gay teenager kills himself and twenty others try. And just last month, Tennessee passed a new law literally forbidding teachers to even acknowledge that gay people exist.

Things are better today than ever before, but there are still miles to go before we sleep. Maybe bare can help a little.