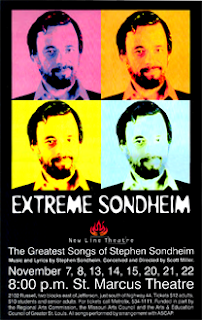 an exploration of the art of Stephen Sondheim
a world premiere revue
Conceived by Scott Miller
Music and Lyrics by Stephen Sondheim
featuring songs from Company, A Little Night Music, Merrily We Roll Along, Anyone Can Whistle, Follies, Assassins, Pacific Overtures, Into the Woods, Passion, and Sunday in the Park with George
November 7-22, 1997
St. Marcus Theatre, St. Louis

THE REVIEWS
“At New Line Theatre, where Extreme Sondheim is now playing, comedy carries the day. The show sparkles in an imaginative trio of comedy songs near the end of the first act. . . All these songs, with their dazzling lyrics and sophisticated musical style, capture Sondheim’s contemporary, New York attitude and are strong enough to work in a revue, stripped of their plot lines.” – Judith Newmark, St. Louis Post-Dispatch

“For those not familiar with his work, this production will provide a marvelous overview of the work of a talented composer and lyricist. If you are a Sondheim fan, you will relish in sitting back and enjoying an evening of wonderful music presented by a diverse and talented group of performers.” - Norma West, KDHX-FM

“What I did realize, hearing the songs out of context this way, was not only how clever and how lyrical Sondheim’s songs are, but how dramatic they are.” – Bob Wilcox, The Riverfront Times

DIRECTOR’S NOTES
Stephen Sondheim once said that to be a musician, to live in music, is a gift from God.

Sometimes working on this material became so difficult, so consuming, that we forgot what a gift we had been given – the opportunity to work on, to collaborate on, some of the most brilliant, most emotional, most transforming words and music ever written for the theatre.

Hard-core Sondheim fans often seem like snobs to other musical theatre fans (I've been accused of that myself). It's not intentional. It's a lot like being a wine connoisseur. Once you've experienced the really great stuff, the mediocre stuff is just not satisfying anymore. Once you've wrapped your tongue around the romantic, passionate lyrics in Passion, once you've mastered the patter lyrics to “Getting Married Today,” once you've sung the glorious dissonances in “The Hills of Tomorrow,” nothing else will ever be the same. I know that sounds a bit over-dramatic, but it's really true.

What's so addictive about Sondheim's work is that once you've started exploring its complexities, its subtexts, its great depth, you find that the journey never ends. The more you discover about Company or Passion, the more you also discover about life, about yourself, about your relationships with those around you. We laugh at “Getting Married Today” in Company because we know Amy's fear. Tears come to our eyes when we hear “Loving You” because we've all known the pain of obsessive love.

We hope you can throw yourself into this material the way we have; to hear the jokes, the comic literary references, and the amazing interior rhymes in “Now”; to really hear the fourteen characters who are all talking at the same time in the song “Company”; to laugh at the absurd egotism and heartlessness of Cora in “Me and My Town”; to catch all the subtle digs at organized religion in “The Miracle Song”; to savor the unparalleled beauty of Stephen Sondheim's music.

We hope Extreme Sondheim gives you an opportunity to listen to these songs more carefully than you could in their original context, without the distractions of sets and costumes, without having to follow the plot. Just the purity of the words and music.

Some critics have complained that Sondheim is too intellectual and too emotionally distant. I think tonight you'll see how wrong they are.

REMEMBERING EXTREME SONDHEIM
Scott called me one day and asked if I would be willing to be in a concert called Extreme Sondheim. I turned him down initially, because I was getting married six days before the opening of the show (which was also my birthday). I reconsidered and agreed to come sing. I was soon to find out what the phrase “art imitates life” really means. When another cast member quit the show, Scott asked me to sing “Getting Married Today” in which Amy spouts all of her fears about getting married and comes up with just about every excuse to get out of it. I must have been asked a million times how in the world I could do that song and be planning my own wedding. My wedding went off without a hitch, the show was well received, but we all know the star of that number was that neon pink veil.
– Angie Shultz

My first show with New Line was Extreme Sondheim. I was very excited to work with this company, but also extremely nervous to be working with all these great people who had done numerous shows with New Line already. The first night of rehearsal I remember being simply amazed at how wonderful the ensemble sounded already, and we hadn't even rehearsed at all. As time went along, I started to feel part of the group. I was one of the singers for the song “Someone in a Tree” and I was playing the part of the person under the floor that was listening to what was going on. I noticed that some of the other company members that were watching were starting to laugh during the song. It kept going on during the song and I was starting to wonder if I sounded that bad. After we were over, they said that when I came out on stage and crouched down for the song, it looked like I was a frog about ready to hop around on stage. Needless to say, the rest of the show, they kept calling me The Frog.
– Patrick Kerwin

Two food stories. Well, there was the “cake” incident. I ordered this wonderful cake from McArthur's bakery. The cake decoration was like the cover of the program. Well, to my horror, I did not notice till I brought the cake into the show closing night, that the R was missing. It said “Exteme Sondheim.” The joke of the night was, “So where R you?” Everybody started calling me Chis. Then, at the cast party, at my house, Bad Ass Judy (Judy Moebeck) and I made a lovely White Castle paté. People really did not care for it too much; I guess because I used pickle juice instead of white wine for flavoring. Like it would really make a difference. Extreme Sondheim was the first time I actually met some of the performers from past New Line shows. I was very intimidated; I thought, “My God, these people are so talented – what can I offer?” But everyone was so wonderful and nice and just fun to be with and so supportive of everyone.
– Chris Brenner, cast member

The Music of Sondheim – A Parody
(To the tune of “The Hills of Tomorrow”
from Sondheim’s Merrily We Roll Along,
with parody lyrics by Scott Miller.)

Bemoan the music of Sondheim,
His words too numerous, too.
You’ll start to seethe –
There’s no time to breathe,
As the lyrics race,
Behold your face turns blue.

Beyond this music, you long for
A simpler musical score…
Just once begin --
You will never win,
As you bust your guts
And wonder what’s it for…