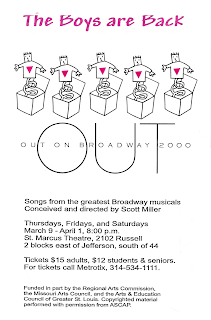 “At least the quirky little [St. Marcus] theater is going out in style. Scott Miller's revue, which presents musical theater songs in a gay context, has graceful, small-scale proportions, just right for this theater in terms of music, voice and staging. Furthermore, the show's message – a plea for tolerance, particularly in regard to sexual orientation – is a fair summation of the point that many St. Marcus shows have made. . . Miller even works in “Danny Boy.” But the ensemble rendition changes the terms so drastically that “Danny Boy” gains fresh meaning, tender and powerful. The song underscores the value of shows like this one: They reveal the familiar in a fresh light. Audiences need places that offer us that perspective.” – Judith Newmark, St. Louis Post-Dispatch

“Out on Broadway 2000, Scott Miller's beguiling assemblage of show tunes, looks like a lot of fun to do. . . This show makes you want to dish about the wise and witty performances of each singer.” – Sally Cragin, The Riverfront Times

“The gimmick sometimes works too, culling surprises from familiar lyrics when placed in a new context. I discovered I'd never really listened to the lyrics of ‘Far From the Home I Love,’ from Fiddler on the Roof, until I heard it in Out on Broadway 2000.” – Bob Wilcox, KDHX-FM

“New Line Theatre's Out on Broadway 2000 gender-reversed Broadway and cabaret standards and provided dreamy entertainment. All that was missing was the clink of ice cubes and a blue haze of cigarette smoke.” -- The Riverfront Times, “Best of 2000”

DIRECTOR'S NOTES
When we put together the first Out on Broadway in March 1996, we had no idea that there would be such enormous public demand for more performances that we’d have to bring it back in August of that same year. We never thought there’d be a cast album. And we certainly never thought we’d be doing a sequel four years later.

But here we are.

So much has changed since 1996. Will and Grace is on television every week, getting great ratings, and three more shows with gay lead characters are planned for next season. And for good or bad, gay Americans are every bit as visible as straight Americans on Jerry Springer and the other talk shows.

Gay marriage has become one of the top issues in the country, with the Vermont Supreme Court ordering the state legislature to give gay couples equal rights, with Californians voting on a referendum against equal marriage rights for gay couples on March 7, and with the Hawaii gay marriage case still rumbling despite setbacks. In contrast, a study just released says 2.5 million gay Americans are currently in heterosexual marriages.

The issue of adoption for gay couples is coming before courts around the country. Anti-gay discrimination in groups like the Boy Scouts is being actively challenged in the courts, and in some cases, is being condemned.

As the presidential races heat up, gay issues are on the agenda everywhere you look. Both Al Gore and Bill Bradley are actively courting gay voters. And even the most conservative Republicans are being forced to acknowledge us and address our issues.

And yet, Matthew Shepard was brutally murdered in Wyoming just for being gay. Billy Jack Gaither was murdered in Georgia for the same reason. And they’re not the only ones.

One of the purposes of the original Out on Broadway was to tell gay teens and closeted gay men and women that it’s okay to be gay, that they can be gay and still be proud of who they are, that being gay is not a sickness. With all the increased visibility for gay Americans, perhaps that’s not as necessary today as it was four years ago.

The other purpose of the original show was to demonstrate how alike gay and straight people are, and how alike gay and straight love is. That is still necessary because, even though we are all alike deep down, the world still does not treat us alike. It’s amazing how easy it was for most of these songs, originally written for straight characters, to work in a gay context – but they do, precisely because gay people think and feel most of the same things as their straight friends and families. And that message can’t be spread far enough or fast enough.