The Best Little Whorehouse in Texas (2003) 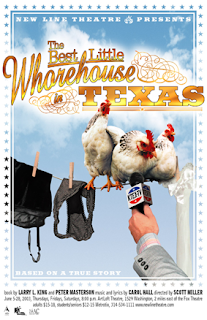 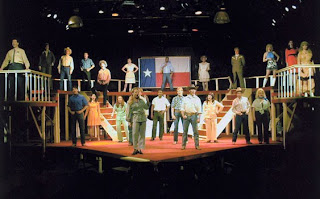 “New Line Theatre’s production of The Best Little Whorehouse in Texas ultimately provides not only marvelous music and dance but substantial food for thought.” – Deanna Jent, The Riverfront Times

“[Director Scott] Miller, who loves musical comedy, chooses to emphasize the musical over the comic in this production. . . But, having made his decision, he executes it with care and intelligence, delivering a production with charms of its own.” – Judith Newmark, St. Louis Post-Dispatch 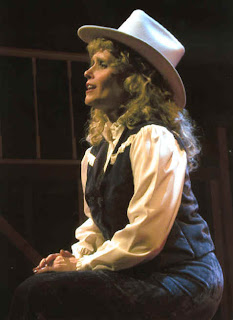 Remember when we found out Monica Lewinsky had been servicing Bill Clinton in the Oval Office? Remember how outraged people were? Remember the months of hearings about it? Remember when Kenneth Starr published the transcripts, which were put in book stores and became bestsellers? If it was all so distasteful, why were all the lurid details in our book stores? Why did every single newscast every night revisit the sorry affair?

At the same time, we’re obsessed with it. We’re constantly talking about it, thinking about it, writing about it. If we weren’t, no one would know who Monica Lewinsky is. Pornography is one of America’s biggest industries. Everyone claims it’s disgusting and immoral, that they would never ever buy or even look at porn. But somebody’s buying it. A lot of it. If it’s not you, it’s probably the person sitting next to you. It certainly wouldn’t be going out on too shaky a limb to suggest that Americans have a distinctly unhealthy and often genuinely comic relationship with sexuality, both their own and that of others.

And that’s what The Best Little Whorehouse in Texas is about. Not sex itself, but the terror, hypocrisy, and insanity always swirling around sex in America. The Chicken Ranch had been operating, with the full knowledge of most of the inhabitants of Texas, since the late 1800s. A few politicians over the years had made political points railing against it. But the furor never lasted for long and the Chicken Ranch kept its doors open.

Until 1973, when a little known television reporter, recently fired from the Harris Country sheriff’s department, decided to put the Chicken Ranch on TV. Until then it had been an open secret, an accepted, or at least tolerated, institution, part of the state’s peculiar culture and history. But putting real life on TV always changes it, and once this television reporter sent his exaggerations and misrepresentations out over the public airwaves, everything changed. Rational men became raving idiots. After more than a hundred years, the Chicken Ranch was now a very public and very “dangerous” problem that needed Action taken against it. And in the process, people’s lives were ruined.

The real beauty and intelligence of this show can be seen in the way it pushes its social and political satire to the background, focusing primarily on the real people whose real lives were greatly complicated and in some cases destroyed by the televised circus masquerading as news. These are simple people leading simple lives in 1973, back before “reality TV” had become a parody of itself, back when television was still mysterious in many ways to most Americans, back when its awesome power was only just being discovered.

Back before moral hypocrisy had become the national pastime.

Any grab for power or attention – or ratings – usually leaves victims in its wake. Their story is the one we tell tonight.