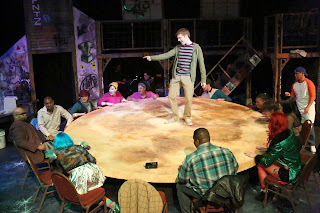 “So how did co-directors Scott Miller and Mike Dowdy craft the hard-faceted and brilliant gem of a show I saw Friday night from the detritus that is Rent? The mind reels. Theirs is a Rent that is sharp, incisive and viscerally moving. These characters matter; their struggles to find themselves in the wastelands of their early twenties are a potent reminder of what it's like to feel lost in your own life, and that even small steps toward maturity can feel immense. In Miller and Dowdy's hands, Rent is a show that deserves every bit of its formidable reputation as the musical that revivified musicals for the next generation. . . It is a masterpiece of stagecraft, a composition as visually stunning as it is sonically powerful.” – Paul Friswold, The Riverfront Times

“Jonathan Larson's 1996 rock musical unfolds to epic proportions in this lively new production. It's also sweet and funny and beautiful, under the direction of Scott Miller. . . It almost seems Mr. Miller is choosing his seasons nowadays for sheer emotional complexity, along with New Line's usual focus on strong musicianship. And the results have been enthralling. Rent continues the company's recent trend of bringing stunning characters furiously to life, in all their contradictions.” – Richard Green, TalkinBroadway

"An intimate, emotionally charged production filled with memorable performances. . . Director Scott Miller and assistant Mike Dowdy have assembled a uniformly talented, fearless cast, and the two excel in pulling out the small moments that illuminate character development. The presence of a guiding hand is clear throughout the production, yet the movements and character nuances feel almost organic, as if each actor pulled his or her role from the inside out. The result is a unified cast that creates a truly bohemian community on the stage. And this feeling is intensified in the group numbers, where layered harmonies blend seamlessly, rising and falling with the emotion of the story." – Tina Farmer, KDHX

“With the current local production of Rent, the question was could New Line Theatre show me something the national tour hadn’t? The answer came last Saturday night: Yes. Yes, they could. . . Undoubtedly, the intimacy of a small production helps to make the story more sincere, but it’s more than that. Director Scott Miller has removed sole focus on a handful of characters to focus on the cast as a whole, and this helps to view the work as a singular organism, with a singular meaning and purpose. Even the music seemed better, with the excellent voices and performances by the cast and the New Line band under the direction of Justin Smolik, two things you can always count on at New Line. . . Everything works together throughout the entire production, top to bottom, for a powerhouse evening of theater.” – Christopher Reilly, Alive Magazine

“If you think you've seen Rent before, you really haven't. . . This is a must-see show, and I cannot recommend it highly enough. . . Scott Miller's direction, with the able assistance of Mike Dowdy, is a revelation. . . Rent is a modern classic, and New Line's wonderful production shows us why.” – Chris Gibson, BroadwayWorld 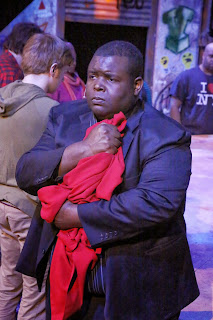 “This Rent has a completely different vibe from the big show that toured the country. Intimate and raw, this production makes the story coherent and the music effective, instead of merely loud. Yes, size matters – but not in the way we usually think it does.” – Judith Newmark, St. Louis Post-Dispatch

“Leave it to New Line Theater to give this seminal work a fresh spin. The result is an electric, enthralling presentation of the landmark Pulitzer-Prize, Tony-winning musical that ran for 12 years on Broadway. . . [The actors'] zeal propelled the show's intensity, and it seemed like we were seeing some of these characters for the first time.” – Lynn Venhaus, Belleville News-Democrat

“The new concept and the advantage of intimacy that New Line always offers, makes this one a big, fat hit. . . It’s a total effort that shows the diversity and depth of New Line talent. Scott Miller has once again put his personal stamp on a classic show and it turns out to be yet another audience pleaser. . . this score is pulsating, tender and just a pure delight. Now we have a production that matches these great songs and makes you actually like the people who populate the show. This one’s a big hit, folks.” – Steve Allen, Stagedoor St. Louis

“I was admittedly one of those folks who didn't get all the hype around Rent after I saw it for the first time several years ago. Well, now I get it. The characters this time around, though dealing with major issues that would be tough for anyone, have an affable quality that was lacking the last time I saw it. Could it be because seeing a show like this in New Line's intimate space makes the theatre experience not just something you see, but something you feel? Yes. But it's also New Line's artistic director, Scott Miller's knack for gaining a deep understanding of whatever he puts his hands on, and translating that to his cast, who in turn translate that to us, reaching out to the audience, in this case literally, with invigorating connection. way better than the touring production. There. I said it.” – Andrea Torrence, St. Louis Theatre Snob

“Rent is being performed by New Line Theatre to sold-out houses, including a most appreciative audience. . . Seeing Rent up close and personal at New Line’s theater is a definite improvement over the more impersonal venue at The Fox, where touring companies have done the show with seemingly less impact.” – Mark Bretz, Ladue News

“I’m glad directors Scott Miller and Mike Dowdy have chosen to follow their own vision for the show. New Line’s version is full of youth and energy. It’s also staged with a sense of immediacy that brings a lot of life to the show. Although the passage of time has turned Rent into something of a period piece, New Line doesn’t treat it that way, and that’s as it should be. It’s an iconic show made achingly real, with all the truth and energy brought along with its humanity. It may have taken New Line many years to finally do this show, but this production is well worth that wait.” – Snoop’s Theatre Thoughts (local blogger)

“As a first-time observer of this story, there was a lot to take in. Rent is the kind of show that rewards its audience with repeated viewings. I could see the show five more times and discover some new facet that I completely overlooked each time before. It’s complex, funny, dark, thought-provoking and ultimately very entertaining.” – Jeff Ritter, The Trades 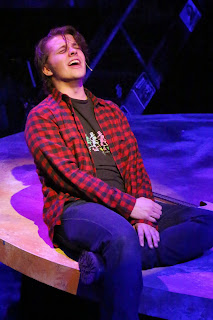 Since we first announced Rent, several people have said to me some variation of “I hate Rent. Those characters are all selfish, whiny brats!” These people are not entirely wrong. But they’re also missing a lot.

This is a coming-of-age story, and so it requires a central character (or characters) who have not yet come of age. If the kids in Rent were all well-adjusted and wise, there’d be no story to tell. Remember what a whiny bitch Luke Skywalker is when we first meet him on Tatooine? And though we don’t really see it, it’s strongly implied early in The Wizard of Oz that Dorothy is a real pain in the ass too. And really, the whole point of High Fidelity is that Rob’s a dick, and he needs to grow up and stop being a dick.

Every protagonist in every story has to learn something. In Rent, these kids need to learn to see beyond their own selves, their own lives, their own immediate wants; to learn that we’re all interconnected, we’re all responsible for each other, or as Sondheim put it so elegantly, “Careful, no one is alone.”

I have this theory that the people who hate Rent see their younger selves in these characters and they don’t like that. After all, most of us are whiny and selfish when you’re young (and we artsies can be the worst); we all still have growing up left to do at that age. On the other hand, several of the central characters in Rent are dealing with much bigger issues than nineteen- or twenty-year-olds should face – AIDS, death, suicide, drug addiction, dangerous streets, etc. How many college-age kids ever grapple with anything like that?

Hero Myth stories like this work because we instinctively recognize the elements of the story, even if only subconsciously, as elements of our own lives. The hero’s journey is always a metaphor for living a human life.

Angel is the wise wizard in this collective hero myth. She’s almost other-worldly in her Zen-like understanding of the world around her, her wisdom, her compassion. She’s there to teach the others (and us) a valuable lesson, to see the world in terms of what we can give instead of what we can get. Angel teaches her friends to be more Christ-like.

After all, Rent is about “the least of these,” the poor, the outcasts, the sick, the rejected – you know, the folks Jesus hung out with. For much of the twentieth century, Alphabet City has been where mainstream society’s rejects form their own community, their own support system, to some extent even their own economy. It’s the place where Mark can toast, “To being an us for once, instead of them.” It’s a place where Mark can ask, “Is anyone in the mainstream?” because he knows the answer is no. Not here.

Maybe the most potent part of the magic of Rent is that its production requires the same kind of community the show depicts. Any cast of Rent has to be, by Jonathan Larson’s design, racially and sexually diverse. And that’s why performing and watching Rent can be so powerful – the sense of community and the intense emotions aren’t just realistic; they’re real. The actors aren’t just portraying all that; they’re living it onstage.

And we’re living it with them.